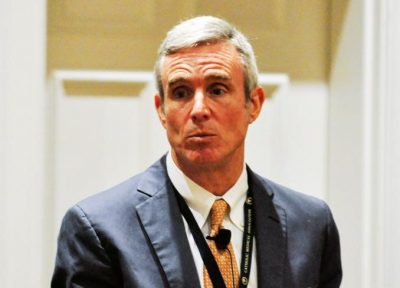 NASHVILLE, Tenn. (CNS) — The goal of the Catholic Medical Association and its Nashville Guild is to help Catholic health care workers strengthen their faith and use it to inform their work in their professions, said Dr. Wes Ely, co-founder and president of the guild.

“You don’t hide and become anonymous in your morality,” said Ely, a critical care doctor at Vanderbilt University Medical Center and the Veterans Administration Center and a professor at Vanderbilt’s School of Medicine.

“The church has truth. I’m going to bring that truth to patients of all faiths and no faiths with love,” he said.

The Catholic Medical Association showered the Nashville Guild, its chaplain and its president with honors during its 88th annual Educational Conference Sept. 26-28 at the Opryland Hotel in Nashville.

The Nashville Guild and its sister organization, the Society of Sts. Cosmas and Damian for medical students at Vanderbilt’s School of Medicine and Meharry Medical College, received the Outstanding Guild Award.

Father John Raphael, chaplain of the Nashville Guild and a chaplain at St. Thomas West Hospital in Nashville, received the Outstanding Guild Chaplain Award. It is the first time this award has been presented by the Catholic Medical Association.

Ely received the Evangelium Vitae Award for outstanding service to the pro-life movement, from conception to natural death.

The work of the Nashville Guild has “become spiritual food,” he said.

The late Bishop David R. Choby of Nashville had asked Ely, Dr. Rachael Kaiser and Dominican Sister Mary Diana Dreger, also a physician, to start the guild, which is unique in its association with the medical students’ society.

“What really set us apart as a guild is our interactions with the medical students, pharmacy students and nursing students,” Ely said. “They are integrally involved in all that we do.”

Dr. Mariu Carlo Duggan started society for students in 2006 when she was a medical student at Vanderbilt University School of Medicine.

“We didn’t have a medical student group for the Catholic students,” said Duggan, who specializes in geriatric medicine at Vanderbilt Medical Center. “I ended up meeting Wes Ely, who had been praying for how he could bring Jesus to the medical campus. It totally clicked.”

The two groups host events together, such as the annual Hippocratic Oath Banquet and the annual White Mass for health care workers. Through the two organizations, medical students can find mentors among the Catholic physicians and health care professionals in the area, said Duggan, who is now vice president of the Nashville Guild.

“It’s been really beautiful to see it blossom,” she said.

“Medical training is very hard, regardless of what kind of medical professional you are, but especially for physicians,” Duggan told the Tennessee Register, Nashville’s diocesan newspaper. “It’s unfortunate that we see so many young physicians die by suicide. The rate of burnout is really unfortunate.

“Our group tries to build up each other’s faith and relationships among physicians so if you’re struggling, you have a group to help you,” Duggan said.

“There’s also the ethical aspect,” she added. “You know you have certain beliefs as a Catholic that are contrary to current medical practice. One of which is contraception. It was incredibly helpful to have other Catholic physicians for advice on how to approach this issue.”

Christ-centered health care “is central to our mission” as a church, said Father Raphael, the guild’s chaplain. The priest also is an ethics consultant at St. Thomas West Hospital and has written several articles on medical ethics.

“We come together as a community to serve … our patients in light of the love we have received from God,” he said. “The beauty of faith-based health care, is that science and faith are not separated. … Neither staff or patients have to put their faith aside.”

The day before the Catholic Medical Association officially opened, Ely led a session on “Suffering and the Caring for Patients in the ICU in the Age of Physician-Assisted Suicide and Euthanasia” during an End of Life Forum.

“By ending a person’s life, we destroy a person’s intrinsic worth,” Ely said during the session. “We turn a ‘somebody’ into a ‘nobody.'”

“People are dulled into thinking this is ordinary care,” he said of physician-assisted suicide and euthanasia.

“What are we doing to heal patients when we can’t cure them?” he asked. Patients need a reason to live, Ely added. “How many of these patients requesting to die would change if they could find their why?”

NEXT: Groups call for end to use of aborted fetal tissue in animal research