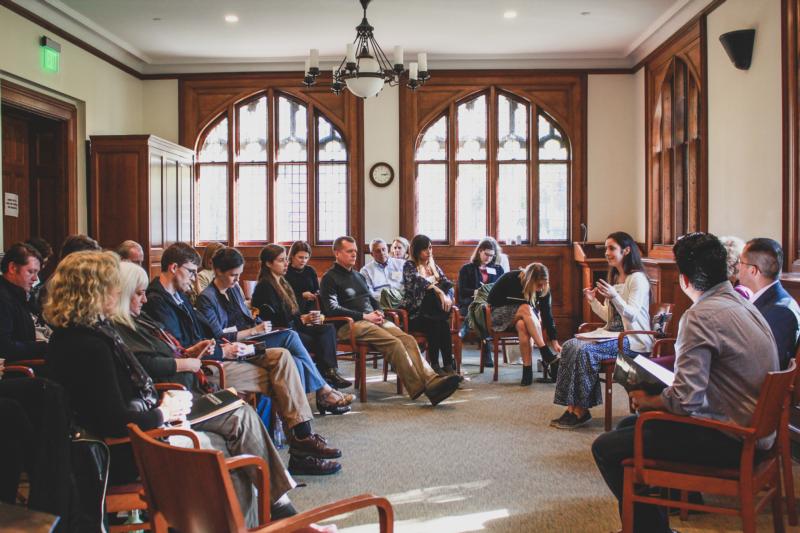 PRINCETON, N.J. (CNS) — Over 40 resettlement agency workers, community engagement organizations, refugees and faith leaders from across state lines and religious traditions gathered at Princeton University Oct. 21 and 22 to talk about the role religion plays in the lives of resettled refugees in the United States.

The Migration and Refugee Services arm of the U.S. Conference of Catholic Bishops partnered with Princeton University’s Office of Religious Life to host the second Refugee and Resettlement Symposium.

It was coordinated by the Religion and Resettlement Project developed by the USCCB and the Office of Religious Life through the Henry Luce Foundation.

According to Todd Scribner of MRS, there is a significant gap in the academic study of the role of religion in the resettlement of forced migrants. Scribner was one of the main organizers of the symposium.

“One of the things we’re doing here with our partnership with the Princeton University Office of Religious Life,” he said, “is to look at the role of religion and integration — how refugees take advantage of symbols, language, and institutions that are religious in nature and use those elements in their process of integrating into American milieu.”

The symposium embodied a network of stakeholders involved in the resettlement process, including representatives from Catholic Charities, the Hebrew Immigrant Aid Society, the Islamic Society of Boston Cultural Center and many other organizations across the nation.

Participant Aden Batar spoke to the need for gatherings such as the symposium in light of the current political circumstances.

“We’ve seen the refugee program be destroyed block by block over the past three years,” he said.

Before working as the director of migration and refugee services at Catholic Community Services in Utah, Batar was himself a resettled refugee from Somalia. This is his 23rd year of working in the field of refugee resettlement.

Despite the 70 million people displaced around the world today, Batar noted, the Trump administration has reduced the refugee quota for this country to admit to a record low of 18,000 people for 2020.

Alongside stakeholders involved in the resettlement process, the symposium also invited students previously involved in refugee-related work to volunteer in assisting the conference events.

Mohammad Hussain was resettled in the U.S by Catholic Charities in 2014. He shared his story during the “refugee perspective” panel of the symposium.

Hussain started working as a translator for the U.S. military in Afghanistan at age 16. As the situation in Afghanistan deteriorated, Hussain and his wife applied for the Special Immigrant Visa, created for nationals in Afghanistan who worked directly with the U.S. Armed forces. He noted the work Catholic Charities did to resettle him was incredibly important to his integration.

“They helped me through my resettlement process, connected me to the local community, the mosque, and provided other core resettlement services so that I could become self-sufficient as soon as possible,” he explained.

Shortly after he was resettled, he was offered a position to work with MRS at the USCCB to welcome and help other immigrants such as himself.

“Even though USCCB is a faith-based agency, they assist and serve people of all faith. They are actively advocating for refugees, immigrants, women, children and all other vulnerable people. This makes me feel privileged for being part of them toward completing their mission,” Hussein said.

As part of the third panel on “long-term resettlement organization,” Kathie O’Callaghan of the nonprofit Hearts and Homes for Refugees in Westchester, New York, discussed the success of the community co-sponsorship model.

This model provides the opportunity for faith and civic communities to partner with one of the nine resettlement agencies operating in the United States to support refugees over a longer period of time.

O’Callaghan acknowledged the barriers faced by resettlement case managers who have to balance managing the situations of various clients and also working with local community organizations or places of worship. “Silos exists because people have to work by necessity; it’s a neglect of communication,” she stated.

However, O’Callaghan also suggested that refugee resettlement workers shouldn’t feel overburdened by doing community organization. She said that her organization announced Hearts and Homes by creating a task force with two members from different churches, synagogues and mosques across Westchester.

The last hour of the conference culminated in a full group discussion regarding initiatives or connections that could be made following the event, and leading up to the symposia that would be held over the course of the next two years.

Katherine Clifton, who is refugee and resettlement project coordinator at Princeton University’s Office of Religious Life, explained that this gathering was part of a series of symposia that aims to develop sensitivity to religion, which she believes is currently somewhat lacking among resettlement agencies.

Reflecting on the event, Clifton said, “It reinforced my faith in bringing people together to teach one another and how necessary that is within a field that is dealing with human lives and human issues.”

PREVIOUS: The dark side of memes: spreading untruths about religion

NEXT: Review on abuse looks at 70 years’ worth of Colorado dioceses’ files