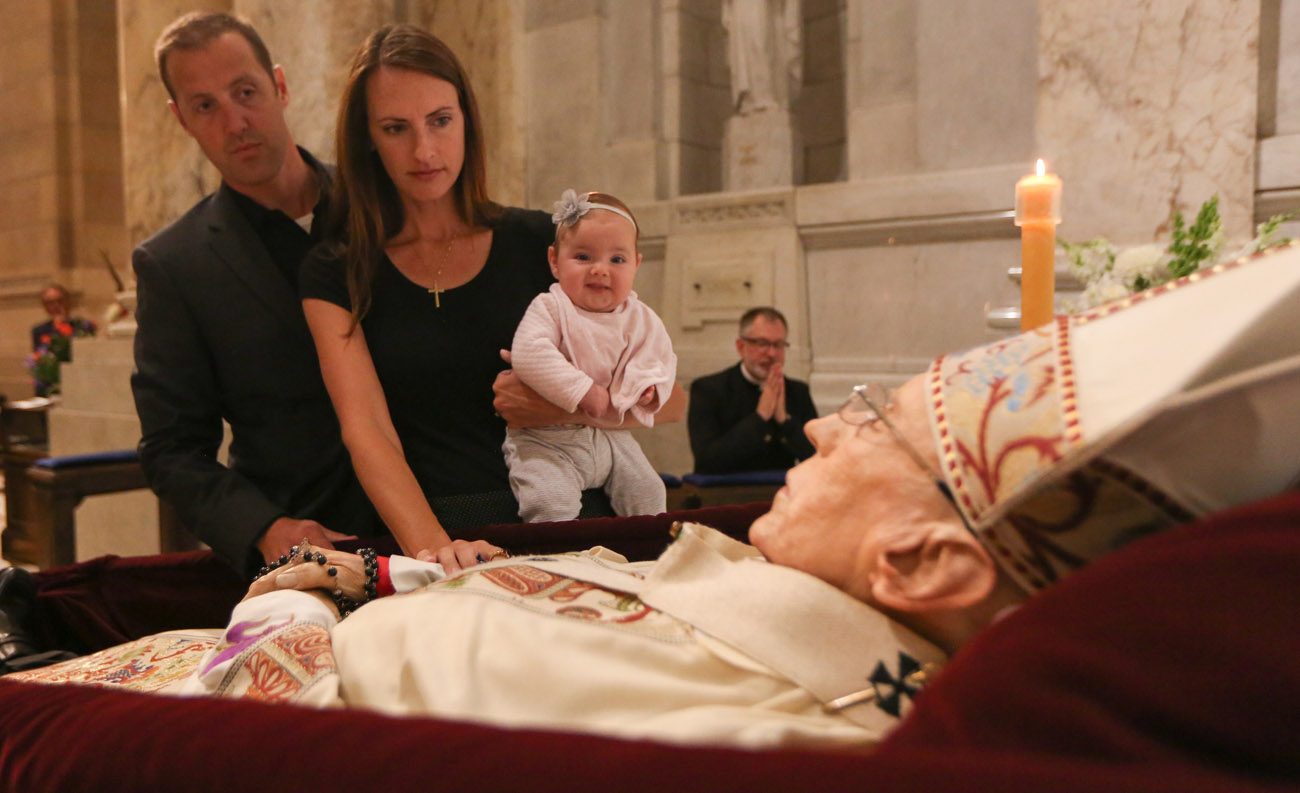 Jon and Maria O’Malley of St. Michael’s Parish in Stillwater, Minn., and their infant daughter, Mollie, stand over the casket of retired Archbishop Harry J. Flynn of St . Paul and Minneapolis before his funeral Mass Sept. 30, 2019, at the Cathedral of St. Paul. The couple adopted six children from Ethiopia, and Archbishop Flynn baptized four of them in 2007. The retired archbishop died Sept. 22, 2019, in St. Paul at age 86. (CNS photo/Dave Hrbacek, Catholic Spirit)

ST. PAUL, Minn. (CNS) — A funeral Mass attended by more than 2,000 people, including a dozen bishops and a U.S. cardinal, hundreds of laypeople, priests, seminarians, religious brothers and sisters, was made intimate by warmhearted stories and heartfelt prayers for the late Archbishop Harry J. Flynn of St. Paul and Minneapolis.

“Archbishop Flynn was a wonderful, wonderful human being,” said Archbishop William E. Lori of Baltimore in his homily Sept. 30 at the Cathedral of St. Paul in St. Paul. “He was warm, had a beautiful sense of humor, never forgot a name or a face, and he wrote out his Christmas cards in July, always with that personal note inside, with his distinctive handwriting.”

There were more than a thousand cards each year, as Archbishop Flynn kept in touch with lifelong friends from his ministry as a priest in the Diocese of Albany, New York, as dean of students, vice rector and rector of Mount St. Mary’s Seminary in Emmitsburg, Maryland, as well as coadjutor bishop and then bishop of the Diocese of Lafayette in Louisiana from 1986 to 1994 and coadjutor archbishop and archbishop of the Twin Cities from 1994 until his retirement in 2008.

After battling cancer in recent years, Archbishop Flynn died Sept. 22 at age 86 in his residence at the St. Vincent de Paul rectory in St. Paul.

Among those bringing up the gifts for Communion were his personal assistant, Bobbi Dawson; his driver of 25 years, Patrick Willis; and Dr. Peter and Lulu Daly of St. Peter Parish in Mendota and their family.

A sense of intimacy was struck with the first chords of a beautiful melody that used the words of Archbishop Flynn’s episcopal motto, “Come Lord Jesus.” It simply repeated those words as deacons, priests, bishops, friends and family members slowly processed into Mass, and pallbearers bore his casket, where it was received and blessed by Archbishop Bernard A. Hebda of St. Paul and Minneapolis.

Sister Andrea Lee, a former president of St. Catherine University in St. Paul, spoke to the congregation just before Mass, sharing her stories of Archbishop Flynn, a longtime friend.

“He introduced me to Jesus in a way I never knew before,” said Sister Andrea, a member of the Sisters, Servants of the Immaculate Heart of Mary.

If love overrides all else in someone’s life, then for Archbishop Flynn it is “race over and won,” she said. His love was “pure, generous forgiving, unvarnished and far-reaching.”

Cardinal Blase J. Cupich of Chicago, the first bishop ordained by Archbishop Flynn, said the final prayer of commendation in the cathedral before the archbishop’s body was transferred for burial to Resurrection Cemetery in Mendota Heights.

But he prefaced the final prayer with a story about his ordination as a bishop, saying Archbishop Flynn was nervous, and accidentally anointed him with the entire carafe of chrism. Talking with Archbishop Flynn at a later date, Cardinal Cupich said, he reminded him of the incident.

“I told him I felt like I was hit by an oil tanker,” Cardinal Cupich said. “He said, ‘Obviously, you needed it.'”

In addition to being thoughtful and ever-present to people in need, Archbishop Flynn had a passionate belief in the Eucharist, Archbishop Lori said.

He understood that the “Eucharist really is the source and summit of our lives, our lives as individuals and as community, whether a parish, a diocese or a seminary.”

“He once said, ‘Give me eight hours of sleep a night and one hour before the Blessed Sacrament, and I will do anything the church will ask of me,'” Archbishop Lori said.

As a pastoral leader, the archbishop walked with people in their struggles, he said.

“He knew that truth and love are friends, not enemies. He knew the importance of mercy, of listening to others,” the archbishop said. “The importance of being present to people in their need. His was the voice you wanted to hear when discouragement set in, or when illness struck, or when big problems loomed. His was the voice that helped so many find consolation and direction and strength in the green pastures of God’s love.”

For years during his retirement, he continued to give retreats for priests and seminarians, religious sisters and brothers, to administer the sacrament of confirmation, say Mass in parishes and serve in other ways, Archbishop Lori said.

“To my mind, he was a priest’s priest and a bishop’s bishop,” he said.

“And so, with so much love, we commend you, Father Flynn, Father Rector, Archbishop Flynn, to the Lord of life and love, to the great Chief Shepherd you served so well. Come Lord, Jesus, come.”

PREVIOUS: Some immigration judges say they rule a certain way to avoid firing

NEXT: For bishop with Mexican roots, El Paso’s assault hit close to home