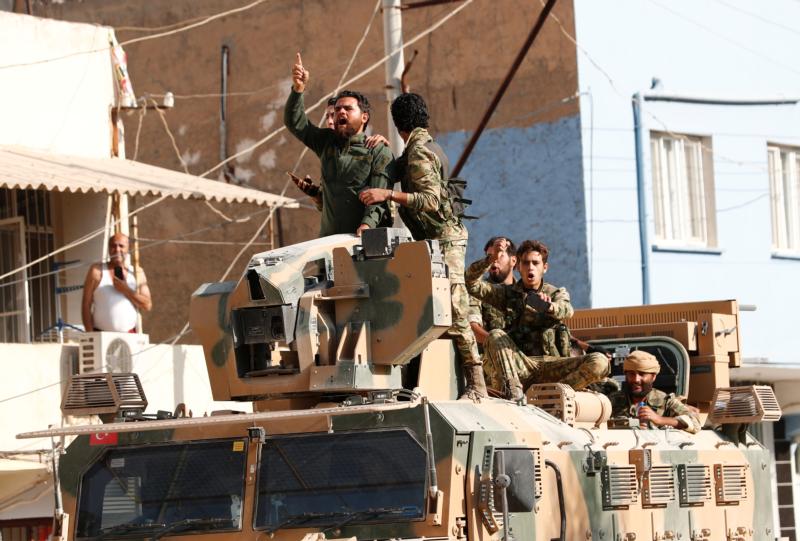 Members of Syrian National Army, known as the Free Syrian Army, react as they drive on top of an armored vehicle Oct. 11, 2019, in the Turkish border town of Ceylanpinar. Dozens of advocacy organizations participating in the International Religious Freedom Roundtable called on U.S. President Donald Trump “not to abandon Christians, Yazidis and Kurds” in the Syrian border region that Turkey is bombing. (CNS photo/Murad Sezer, Reuters)

AMMAN, Jordan (CNS) — Christians concerned with religious freedom violations resulting from the Turkish military offensive on northeastern Syria are urging U.S. President Donald Trump to “reconsider and reverse” his Oct. 6 decision to move American troops out of the way of a Turkish incursion.

In the Oct. 9 letter to Trump, scores of advocacy organizations, some participating in the International Religious Freedom Roundtable that meets on Capitol Hill in Washington, called on the president “not to abandon Christians, Yazidis and Kurds” who are the inhabitants of the Syrian border region that Turkey is bombing to create a “safe zone.”

“It was deeply shocking to us as advocates for international religious freedom,” as the region “is a rare example of success for U.S. military intervention post-911 — a showcase for religious freedom and democracy,” the letter said of Trump’s decision. A copy was made available to the Catholic News Service.

“It undercuts our own trust that this administration is truly committed to international religious freedom and the survival of religious minorities in the Middle East,” it said, adding that “the proposed invasion zone includes key historic Syriac Christian towns and churches, all Kurdish majority towns, the population, and key administrative and education centers.”

Signatories include Law and Liberty Trust, Family Research Council and Jubilee Campaign, all based in the Washington, D.C., area.

Despite bipartisan U.S. Congressional disapproval of Trump’s abrupt decision to pull back U.S. troops from northeastern Syria — and against the advice from the Pentagon, the National Security Council and the State Department — the president did not back down. He said it was too costly to keep supporting Kurdish-led forces in the region fighting Islamic State militants. The Syrian Democratic Forces fought with U.S. troops to defeat Islamic State in Syria.

Religious freedom advocates are worried that Kurdish and Syriac Christians forming the Syrian Democratic Forces will be annihilated by Turkey, the second-biggest military power in NATO, and that ethnic cleansing of the region’s inhabitants will occur. Turkish President Recep Tayyib Erdogan has vowed to move 2 million Syrian refugees who are Sunni Muslim and currently in Turkey into the “safe zone” and displace Syriac Christians, Yazidis and Kurds, who are the native inhabitants of northeastern Syria.

Greek-Melkite Archbishop Jean-Clement Jeanbart of Aleppo, Syria, said such a move by Erdogan risked causing a “demographic earthquake, displacing Kurds from their homes and lands and creating the conditions for serious internal tensions.”

“It would be inhumane,” he said.

In 2018, the Turkish military, also employing Islamist soldiers, invaded nearby Afrin, displacing 300,000 Christians, Yazidis and Kurds from their hometowns.

“A military solution has been chosen” (by Turkey) and this leads to “the risk of a real massacre with many innocent deaths,” Archbishop Jeanbart told the Italian SIR news agency based in Rome.

“I hope that dialogue can be resumed in order to find a peaceful solution, a compromise that guarantees safety for all parties involved,” he said.

The International Rescue Committee reports that 64,000 civilians fled the Turkish bombing in the first two days of the aerial bombardments.

Chaldean Catholic Archbishop Bashar Warda of Irbil, Iraq, said that, in early October, his archdiocese had seen “a growing number of Syrian Christian refugees who have sought safety within the Christian community here.”

“We expect that, should additional Christians seek to flee conflict in northeast Syria, most of them would come here to Irbil,” he said, noting that “the complex situation … continues to threaten progress and stability within Iraq.”

Lauren Homer, an Anglican international lawyer on religious freedom issues, told CNS that the U.S. and Europe must quickly stop Turkey’s invasion as it “will destabilize the region even more than the Syrian civil war already has.” Homer also chairs the Middle East Working Group of the International Religious Freedom Roundtable. One way to achieve this may be for the U.S. to set up a no-fly zone over the region, she said.

“Instead of being on the brink of peace with much of Western and Eastern Syria stabilized, this will energize militant Islamists across Syria and Iraq,” said Homer, who heads Law and Liberty Trust, one of the letter’s signatories.

PREVIOUS: Women religious should have vote at synod, theologian says