Amid church concerns, Kenya rolls out vaccination against cervical cancer 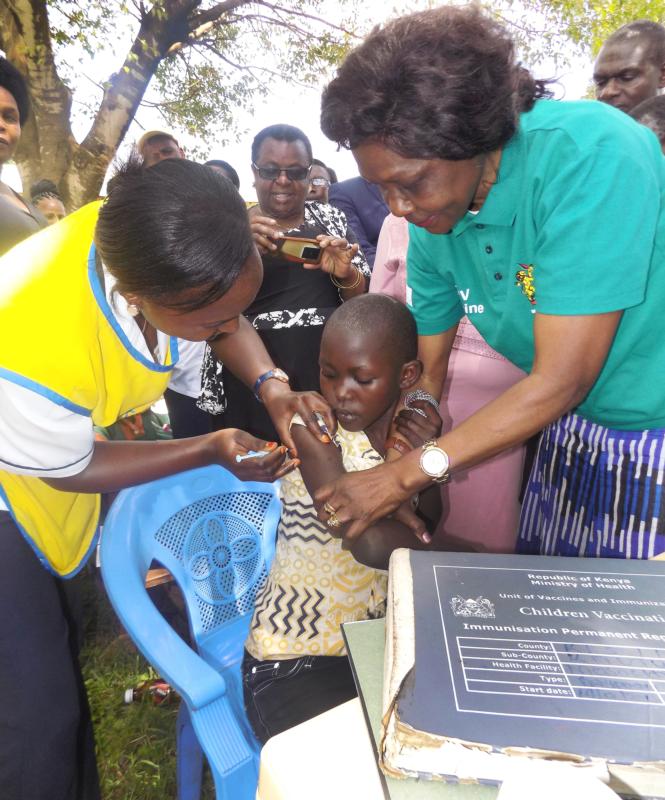 A young girl is vaccinated for HPV in Kisii, Kenya Oct. 25, 2019. Some parents remain hesitant about having their teenage daughters participate in the government-sponsored vaccination program against cervical cancer. (CNS photo/Fredrick Nzwili)

From her residence in a middle-class neighborhood of Nairobi, Mandere had followed with interest as President Uhuru Kenyatta rolled out the mass vaccination campaign against HPV, the virus that causes cervical cancer. The campaign is directed at an estimated 800,000 girls between the ages of 10-14 in two injections, six months apart.

“Let us not fight science, let us talk and agree for a prosperous future. Cancer does not know tribe or religion. It affects all of us,” Kenyatta stressed at the launch in the coastal city of Mombasa in mid-October. Church-run hospital and clinics are expected to participate in the vaccination campaign.

But Mandere, a mother of three, is afraid.

“My worry is the jab may cause other complications in our children, even trigger the cancer, which we are trying to fight,” she told Catholic News Service.

Many Kenyan families have been questioning the safety of the vaccine, even as the government and international health organizations — including the World Health Organization — stress its safety.

Some question why the injection is being given to children who are not sick and not sexually active and why the frequency of the mass vaccination campaigns is on the increase.

Her comments echoed those of Archbishop Martin Kivuva Musonde of Mombasa, who, at the launch, warned that the vaccine had side effects the government must address.

“We have been saying that government should not just accept vaccines from abroad and start administering them without ascertaining their safety,” Archbishop Musonde told journalists.

“If we are not careful, there is the risk of some unscrupulous people bringing in drugs … and using our people as guinea pigs,” he added.

At the same time, Bishop Peter Kihara Kariuki of Marsabit said the church was concerned about the vaccines and has been asking that its experts, and those from the government and its stakeholders, test them to ascertain their safety.

“We are not the only ones who have doubts, but testing together clears mistrust. Now this one is already out there, but it’s not clear if the testing was done,” Bishops Kariuki told Catholic News Service Oct. 25. “The government is forcing it, and some parents are not trusting us.”

The bishop said the church had sounded its warning, but the parents must decide whether to have their children vaccinated.

Recently, Dr. Wahome Ngare, a gynecologist from the Kenya Catholic Doctors Association, warned the vaccine could lead to brain damage, seizures or paralysis, among other dangerous side effects. And the Kenya Christian Professionals Forum, which includes Catholics, has posted an online petition urging parents to reject the vaccination. For the forum, it’s just a vaccine against a sexually transmitted virus and not cancer.

But as early as July 2017, the Global Advisory Committee on Vaccine Safety of the World Health Organization said it recognized the need to monitor problems, but it was concerned about continued misinformation.

“There are now accumulated safety studies that include several million persons and which compare the risks for a wide range of health outcomes in vaccinated and unvaccinated subjects. However, despite the extensive safety data available for this vaccine, attention has continued to focus on spurious case reports and unsubstantiated allegations. The committee continues to express concern that the ongoing unsubstantiated allegations have a demonstrable negative impact on vaccine coverage in a growing number of countries, and that this will result in real harm,” it said.

East Africa has one of the highest cases of cervical cancer because of HIV, which suppresses the immune system. Rwanda was the first to start the HPV campaign, targeting boys and girls ages 11-12 years in 2010. Uganda began its program in 2015, and Tanzania launched a campaign in 2018.

NEXT: U.S. bishops set to begin their ‘ad limina’ visits to Rome