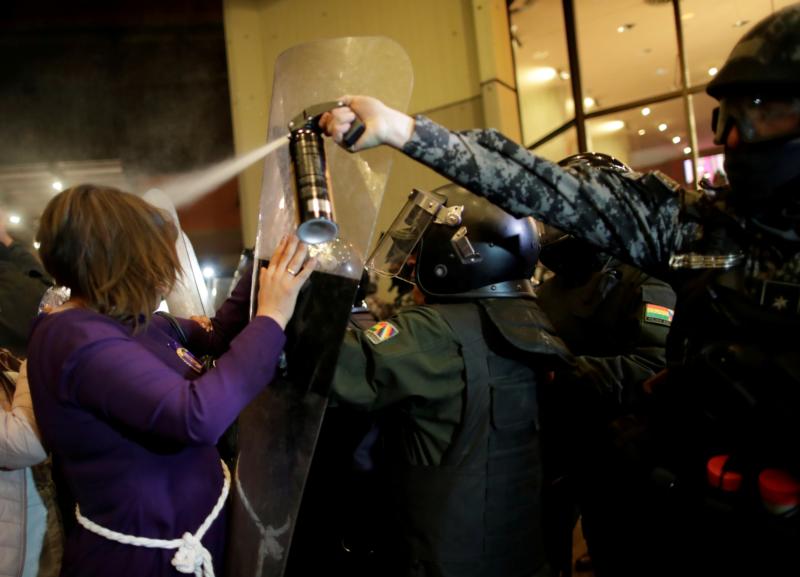 MEXICO CITY (CNS) — Bolivia’s bishops have called on electoral officials to “make transparent” the vote-counting process as protesters rioted in the South American country, alleging fraud in the presidential election.

The bishops, breaking from their participation in the Synod of Bishops for the Amazon at the Vatican, appealed for calm. But they also voiced worries over “signs of fraud” in the Oct. 20 election.

The vote count was suspended for nearly 24 hours after polls closed and then reopened suddenly to quickly give incumbent President Evo Morales an even larger advantage — and nearly enough to claim an outright victory and avoid a runoff election.

“We are very concerned because there are evident signs of fraud,” Bishop Ricardo Centellas Guzman of Potosi said Oct. 22 in a video from the Vatican, where he was flanked by other Bolivian bishops.

“The protests have been widespread. We’re making a call for the vote to be respected, the public outcry to be heard and hopefully there is a runoff election.”

The election in Bolivia was expected to be close as Morales, the country’s first indigenous president, pursued a fourth presidential term.

Morales, whose Movement Toward Socialism party has dominated Bolivian politics in recent years, had counted on broad support: The country’s economy had expanded significantly since he took office in 2006 as the resource sector boomed and he pursued economically pragmatic policies.

He clashed with the country’s Catholic bishops, who objected to a 2009 constitution diminishing the church role in health and education. They said it supplanted Catholicism with Andean religious customs. The relationship, however, appeared to improve with Pope Francis’ visit in 2015.

But the Morales candidacy became controversial as he was constitutionally prohibited from pursuing a fourth term. He put the issue to a vote and was defeated.

In 2016, however, he persuaded the Supreme Court to allow him to run, arguing the prohibition violated his human rights.

Observers say anger over alleged electoral fraud has been compounded by anger over the court decision, along with the Bolivian government’s slow response to mass fires earlier in 2019.

“This is the second time in the space of one presidential term that the government ignores our will expressed through the ballot box,” said Jhanisse Vaca-Daza, a human rights activist and co-founder of Rios de Pie, a Bolivian citizen movement. “Recently, during the wildfires crisis in Bolivia, in which we lost over 4 million hectares (of forest), the government also refused to listen to our call for a declaration of national disaster.”

With roughly 80% of ballots counted in the round of voting, Morales received 45% support, compared with 38% for his main opponent, Carlos Mesa. When vote-counting resumed after a long pause, Morales’ vote total surged to nearly a 10 percentage-point difference, the advantage needed for winning outright and avoiding a runoff.

“His chance of winning a runoff are slim,” wrote political analyst Rafael Archondo on the website Brujula Digital. “Evo should pack his bags. It’s time.”

NEXT: Before new ministries, church must eradicate clericalism, bishop says