Haitian bishops’ justice commission calls on president to step down 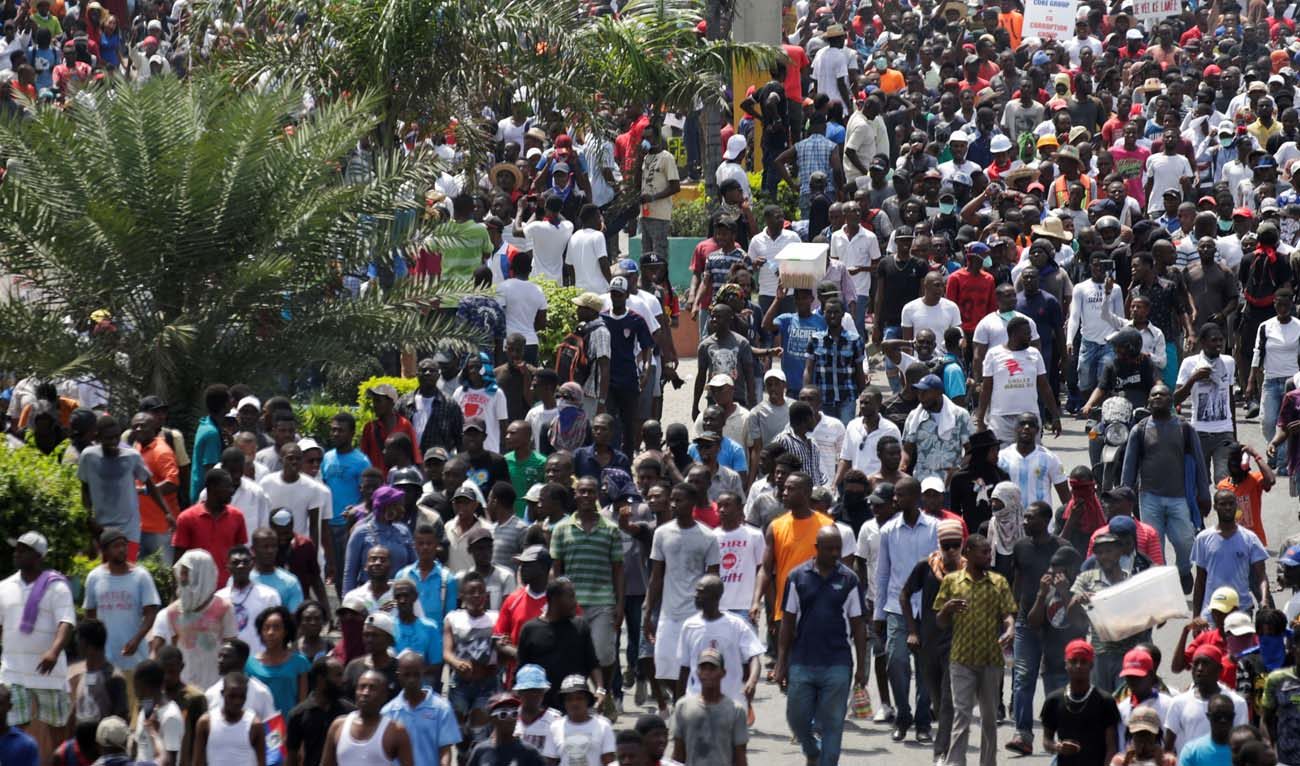 Protesters in Port-au-Prince, Haiti, take to the street Oct. 4, 2019, during a demonstration to demand the resignation of President Jovenel Moise. As Port-au-Prince began its fourth week of paralysis due to serious social unrest, the Haitian bishops' justice and peace commission called on Moise to step down. (CNS photo/Andres Martinez Casares, Reuters)

PORT-AU-PRINCE, Haiti (CNS) — As Port-au-Prince began its fourth week of paralysis due to serious social unrest, the Haitian bishops’ justice and peace commission called on President Jovenel Moise to step down.

Going a step further than the bishops, who squarely laid the blame for the current chaos on the present government and elected officials in late September, the justice and peace commission said, “A change in head of state is crucial as is a change in the way the authorities govern the country.”

Haitian leaders, it said, are “digging the people into a deeper ditch with no way out. They are the ones responsible for all the bad steps that the country is taking.”

This government, the commission said, “lacks the will, the competency and the capacity to take the necessary decisions to respond to the needs of the people.”

Haiti has been embroiled in a deepening crisis as a movement to demand accountability for government corruption scandals has turned into a broad popular insurrection to oust the president and put an end to endemic waste and embezzlement of state funds.

Throughout 2018, a movement known as the Petro Challengers was launched when a few citizens started asking what happened to some $4 billion generated by the sale of oil loaned by Venezuela after the 2010 earthquake. When government auditors pointed a finger at a string of government officials, including Moise, the Petro Challengers erupted into a broad citizens’ movement that took to the streets.

A further citizens’ social media campaign produced a popular video to question the costs of running the Parliament. It showed that each of the country’s 119 deputies (congressmen) costs the state more than $326,000 per year, and each of the 30 senators cost $1.3 million, dwarfing state funds allocated for health or education.

In September, a pro-government senator said colleagues were offered $100,000 to vote to ratify the president’s latest choice of prime minister and added that this was normal practice. This further fanned the flames of citizens’ fury against their government.

On Oct. 7, sporadic demonstrations continued in the streets of Port-au-Prince, often put down by heavily armed police SWAT units; most Haitians remained at home for fear of violence. Some ventured out to search for gas, which was scarce, as the government’s failure to pay fuel bills has gas suppliers reluctant to deliver to Haiti. Schools remained closed, and hospitals were barely able to function, for lack of electricity or gas to supply generators. Demonstrators blocked roads to stop traffic circulating. A ceremony to mark the opening of the judicial year Oct. 7 was canceled, as demonstrators threatened to stop the activity.

The justice and peace commission described Haitian leaders as “indifferent to the situation of misery (the people) live in.” People are unable to eat, it said, because of the high cost of basic products. Since early 2018, inflation has risen by nearly 50%, from 13% to 19%, and the local currency, the gourde, has fallen from 65 to the U.S. dollar to 95.

The commission described Haitians as “unemployed people in a place where there are no jobs, or exploited without access to a fair wage, a people who lack the means to pay for the education of their children, a people without access to health care because of its high costs.”

Apart from living in poverty, Haitians are denied their most basic civil rights, the commission said: “The people get no justice from the state when their rights are violated, they cannot circulate freely without being victims of murder, armed robbery, rape or theft, they cannot demonstrate for their rights without being victims of police shootings.”

In an Oct. 3 news release, the National Human Rights Defense Network reported that 17 people died 189 were injured in anti-government demonstrations between Sept. 16 and 30; most were victims of police repression.

Echoing the bishops, the justice and peace commission blamed the country’s leaders: “Corrupt practices and the irresponsible behavior of Haitian leaders are the causes of the lack of functioning of state institutions … no services are available in the offices of state institutions; the judicial system covers up the abuses and crimes of theft of the ‘mighty’ whereas the poor are left to rot in jail with no trial. ”

This government, the commission said, “lacks the will, the competency and the capacity to take the necessary decisions to respond to the needs of the people.”

It said real change was necessary to bring about a better Haiti.

Most Haitian nongovernmental organizations working for development and human rights seemed to be in agreement with the justice and peace commission.

Emile Eyma, director of the nongovernmental organization Institute of Research and Technical Support to Environmental Planning, known by its acronym, IRATAM, said Haiti is at a crucial juncture but that he did not expect a quick solution.

“It would be better now to find a way forward that allows genuine participation of all sectors and addresses some of the underlying issues that have not been resolved since the departure of (dictator Jean-Claude) Duvalier in 1986. Even if it takes some time to find a consensual solution among Haitians, it must be done to avoid another future descent into chaos.”