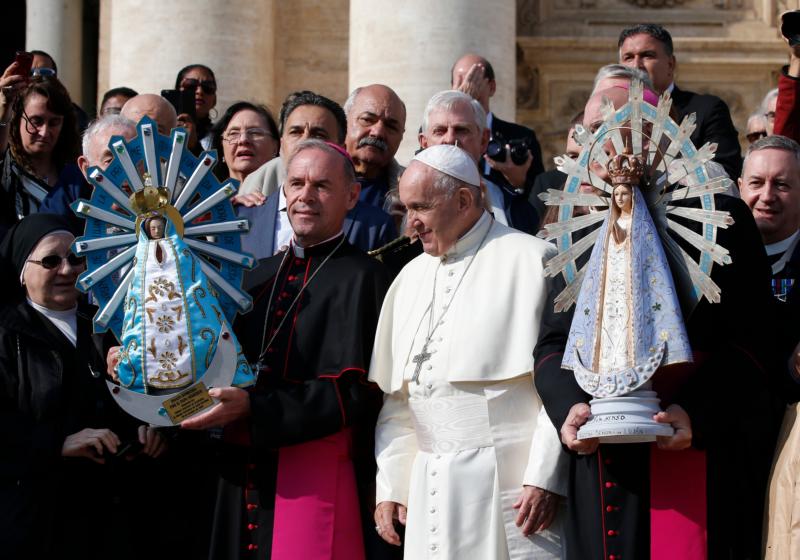 Pope Francis poses for a photo with Bishop Paul Mason of the Military Ordinariate of Great Britain and Bishop Santiago Olivera of the Military Ordinariate in Argentina, as they hold statues during his general audience in St. Peter’s Square at the Vatican Oct. 30, 2019. The two bishops exchanged a replica of the statue of Our Lady of Lujan, which was taken to the United Kingdom by British troops during the Falkland War in 1982, Vatican News reported. (CNS photo/Paul Haring)

Pray to the Holy Spirit “for a heart that is open, sensitive to God and welcoming” toward others, the pope encouraged Catholics Oct. 30 during his weekly general audience in St. Peter’s Square.

The pope continued his series of talks on the Acts of the Apostles by looking at the Apostle Paul’s journey to Macedonia, which was inspired by a vision, guided by the Holy Spirit.

“The apostle does not hesitate, he leaves for Macedonia, sure that it is God who is inviting him,” the pope said.

There, Paul preaches to a group of women, he said, and Lydia, whose heart has been opened by God, listens, receives baptism with her family and offers Paul hospitality.

It marks the start of evangelizing Europe, “a process of inculturation that continues still today,” the pope said.

However, Paul and Silas are eventually thrown into prison on charges of public disorder.

But something surprising happens, the pope said. Instead of complaining about their circumstances, they praise God, which “unleashes a power that frees them”: An earthquake shakes the foundations of the prison, throwing open the doors and loosening the prisoners’ chains.

Their jailer, who asks how he may be saved, also listens to the word of God, receives baptism with his family and offers his evangelizers hospitality.

“In the dead of night for this unnamed jailer, the light of Christ radiates and conquers the darkness, the chains of the heart fall and a joy never felt before opens up in him and his family,” he said.

This shows how the Holy Spirit is guiding the church’s mission, Pope Francis said. “He leads us onward, he wants us to be faithful to our vocation” and helps the people of God bring the Gospel to others.

At the end of the general audience, Pope Francis met with Bishop Paul Mason of the United Kingdom armed forces and Bishop Santiago Olivera of Argentina’s military.

According to Vatican News, the two bishops exchanged a replica of the statue of Our Lady of Lujan, which was taken to the United Kingdom by British troops during the Falkland War in 1982.

The statue of the Mary, patroness of Argentina, was to be returned to its native country and a replica, blessed by the pope, was to be presented to the Catholic Military Cathedral of St. Michael and St. George in Aldershot, England.