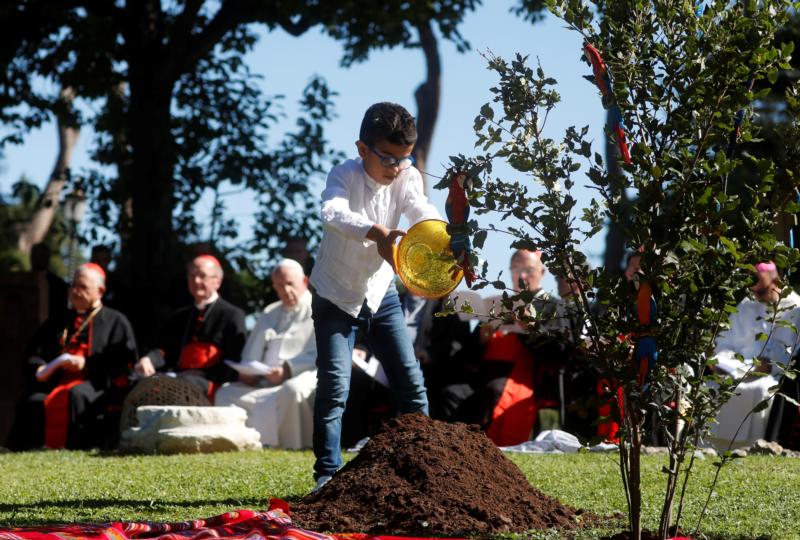 A child pours soil from different parts of the world during during a celebration marking the feast of St. Francis in the Vatican Gardens Oct. 4, 2019. (CNS photo/Yara Nardi, Reuters)

VATICAN CITY (CNS) — People in Western countries need to see the different cultural expressions of faith that exist in other parts of the world, said some participants at the Synod of Bishops for the Amazon.

Panelists attending a Vatican briefing Oct. 7 were asked to comment on the way some media outlets and some people on social media expressed shock, disdain or concern for the presence of a wooden statue of a bare-breasted pregnant woman during a prayer service in the Vatican Gardens Oct. 4 and about the Catholic indigenous man who brought up the offertory gifts at Mass Oct. 6 wearing a headdress adorned with feathers.

“It is even more important that the world of Europe and Rome learn that other cultures also know how to talk about life, about well-being, fraternal coexistence,” said French-born Bishop Emmanuel Lafont, who leads the Diocese of Cayenne in French Guiana, bordering the Amazon Basin.

It is important people see there is another way to live “and not just consume and accumulate things,” he said through a translator.

“There can’t be just one voice. Every culture has its voice and its wisdom,” he added.

He said he told the bishops of France years ago that if they were going to talk about ecology, then they also needed to listen to what indigenous people in the American and African continents had to say about their relationship with nature.

Once upon a time, these indigenous ways of life would have been considered forms of “idolatry” or a sign of “a lack of civilization,” he said, “because we thought that only we had the truth and other people had nothing.”

Giving visibility to different expressions and cultures not only will be a big part of discussions at the synod, but it also will be a “great service we can offer these people who believe they are more civilized than others,” Bishop Lafont said.

The indigenous headdress is worn for very special occasions — like the synod’s opening Mass, he said.

These images are very “striking” and that can make it hard for some people to go beyond appearances and look more deeply and discover what truly lies in the heart of these people, said the bishop, who is a member of the Dominicans.

“There are many things to discover” about the people of the Amazon, and the church can help them show the world who they are, he added.

“They have their own voice,” the bishop said, and the church wants to help them speak for themselves rather than simply being the object of another’s attention.

Commenting about the statue of the pregnant woman, the Spanish-born bishop said he has seen the image before and it seems to be a nonspecific symbol for fertility, life and women.

The statue could be seen as symbolizing “the Amazon like an entity that is pregnant with life for the entire planet, for all people.”

Sister Alba Teresa Cediel Castillo, an indigenous member of the Congregation of Missionary Sisters of Immaculate Mary and of St. Catherine of Siena, said she agreed with the bishop’s interpretation.

But she said she would add that it was her hope that “this pregnancy, this life that we are celebrating in the synod may give birth and not be a miscarriage.”

Sister Cediel said she works with sisters who minister to the poor and indigenous, either in big cities or in remote areas of the Amazon region.

Women religious “have a very great presence in the Amazon,” she said. “There are very few priests, and many have to go from place to place to place,” trying to minister to many people spread out over vast distances.

“But we (sisters) have a constant presence in education, in health care, in projects that (communities) have for development,” she said.

By virtue of their baptism, she said, “we accompany indigenous people in various events.”

When a priest “cannot be present and there is a need for a baptism, we baptize,” she said. “If someone wants to get married, we are there and we witness to this couple’s love.

“And many times, we have listened to confessions,” she said. “We haven’t given absolution, but in the depths of our heart, we have said, with the humility that this man or woman approaches us, in times of sickness or when they are close to death, we believe that God the Father acts there, too.”

“The presence of women in the Amazon is great and very fertile” with the presence of many missionaries and religious congregations, said Sister Cediel.

Contributing to this story was Junno Arocho Esteves and Barbara Fraser at the Vatican.

NEXT: Bishops call on European citizens to wake up, rejoice