Indigenous vow to stand with Pope Francis, with each other 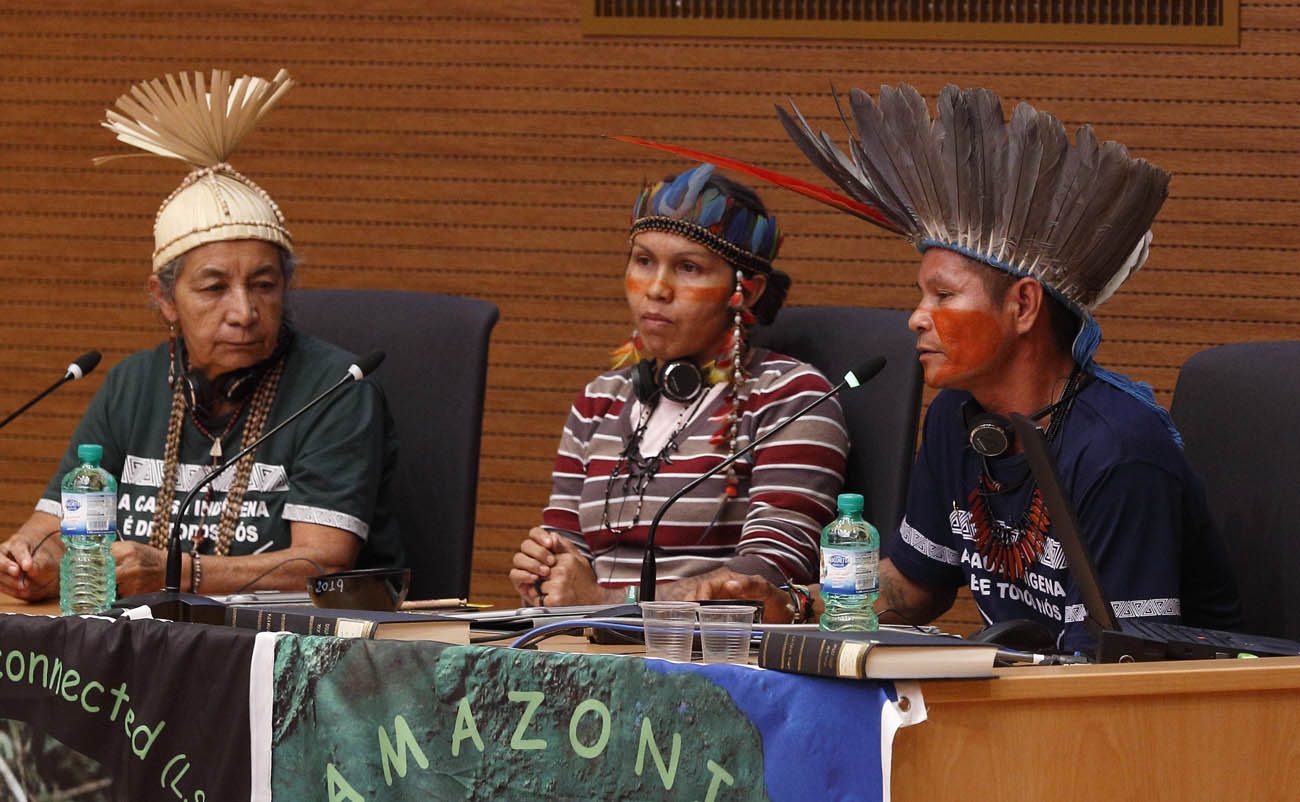 Francisco Chagas Chafre de Souza, a leader of the Apurina in Brazil’s Amazon region, speaks at a meeting of indigenous people from North America and South America at the Jesuit General Curia in Rome Oct. 17, 2019. Also pictured are Dona Zenilda with the Xucuru people of northeast Brazil, and Ednamar de Oliveira Viana, a leader of the Satere-Mawe people in Brazil. The meeting was a side event to the Synod of Bishops for the Amazon. (CNS photo/Paul Haring)

VATICAN CITY (CNS) — Pope Francis and members of the Synod of Bishops for the Amazon repeatedly vowed to support, defend and accompany the region’s indigenous people.

But a few hours after having a special meeting with the pope, three indigenous leaders encouraged others from North and South America “to walk with Pope Francis and not leave him by himself.”

The pope met Oct. 17 with about 40 indigenous people from the Amazon, a group that included representatives participating in the synod and others who were in Rome for synod-related events.

According to the Vatican press office, the meeting began with indigenous leaders thanking the pope for convoking the synod and asking his help in securing “a serene and happy life for their people, taking care of their land and protecting their waters so that their descendants may enjoy them.”

Pope Francis’ comments to them focused on evangelization and how the Gospel message can and must take on an Amazonian character among their people.

The Gospel is like a seed whose growth is strongly influenced by the soil in which it is planted, he said. Christianity “was born in the Jewish world, developed in the Greco-Latin world and reached other lands — like the Slavic, the Asian, the American,” the Vatican statement said.

The Gospel must be inculturated, the pope said, because “people receive the proclamation of Jesus with their own culture.”

A few hours after the meeting with the pope, the Amazon indigenous joined indigenous leaders from the United States and Canada for a dialogue on common challenges and threats their people face and on efforts to protect and defend their lands.

The dialogue began with a prayer and a smudge ceremony. Sister Priscilla Solomon, an Ojibway and a Sister of St. Joseph Sault Ste. Marie from Canada, held a bowl of sage, tobacco, sweet grass and cedar that was lighted for the prayer chanted by a representative of the Lakota Sioux from South Dakota.

Participants used the smoke to cleanse their minds, hearts, lips and ears and prepare for the dialogue. Then, to the beat of a Lakota drum, they took their places in the conference hall.

Francisco Chagas de Souza, a leader of the Apurina in Brazil’s Amazon region, said the Catholic Church is the only supporter his people have in their struggle for recognition of their lands and for stopping “invasions” by those who show “a lack of respect toward mother nature and our water, a lack of respect for our rights.”

“Join our fight,” he asked the North Americans. “Only together can we fight the evil affecting my region.”

Ednamar de Oliveira Viana, a leader of the Satere-Mawe people in Brazil, told the group how “many people have died” resisting the “invasion” of their traditional lands. “We need to be strong and resilient and work hand in hand. Let’s not leave Pope Francis alone in this. We need to be committed to protecting our common home.”

“We do not have another planet, another Earth,” she said. “This planet is the planet chosen by God for us and we must protect it.”

Dona Zenilda, who assumed a leadership role with the Xucuru people of Northeast Brazil after her husband was murdered, urged indigenous people from North and South America to unite in honoring the sacrifice of their martyrs by defending their land.

“We have to walk with Pope Francis and not leave him alone,” she said. “And we must all pray together because only together can we protect our mother Earth.”

Archbishop Donald Bolen of Regina, Saskatchewan, who accompanied the Canadian delegation, told the gathering that Pope Francis’ encyclical “Laudato Si'” on integral ecology “calls us to a new depth of solidarity, which rises beyond national borders, which bridges cultures, which seeks encounters with others and a new way of walking together.”

Such a solidarity, he said, “begins when we hear the pain of the Earth and the suffering of our brothers and sisters, and we respond together.”

NEXT: Catholic priest murdered in Kenya, latest in string of killings