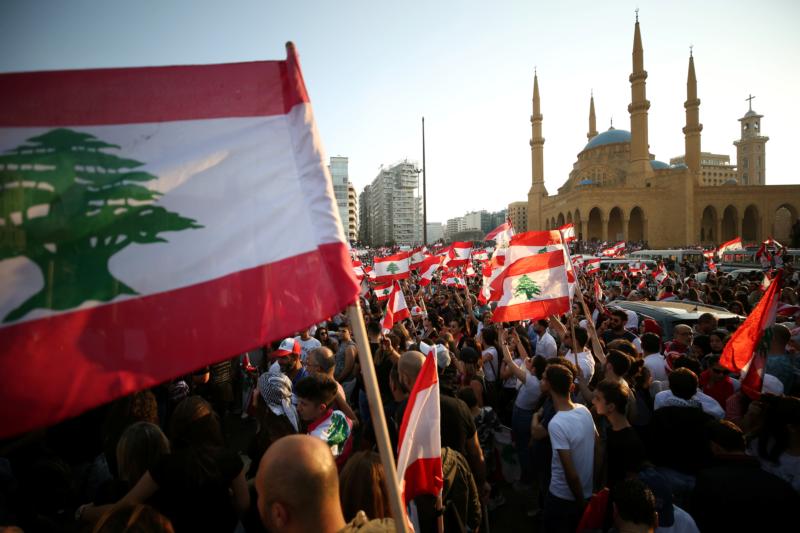 BEIRUT (CNS) — Hundreds of thousands of Lebanese of various religions sounded their cries in unison in streets and public squares throughout the country calling for government reforms.

Fueled by economic insecurity and deteriorating living conditions, a fifth day of protests Oct. 21 were sparked by government plans to impose new taxes.

Lebanon’s Catholic patriarchs — who have repeatedly raised their voices against political corruption, imploring the government to address the country’s dire economic situation — expressed their solidarity with the demonstrators.

Cardinal Bechara Rai, Maronite patriarch, cut short a pastoral visit in Africa to return to Lebanon amid the unprecedented uprising.

Speaking from Laos, Nigeria, Oct. 20, Cardinal Rai said that Lebanon’s government officials “know that they are the ones who brought their country to this situation and they must find successful ways to reform.”

The cardinal reiterated that more than one-third of Lebanese citizens are below the poverty line, the country’s unemployment rate stands at nearly 40% and that “hunger and destitution threaten many citizens.”

“We pray to God, through the intercession of our mother Mary, Our Lady of Lebanon, and St. Charbel, to touch the conscience of our political officials and inspire them to find the necessary, successful and quick solutions to the economic and social crisis, which has become a crisis of hunger,” which the cardinal said threatens the lives of the Lebanese as did the famine in 1914.

The crisis, “imposed from within,” Cardinal Rai said, led elderly and youth alike to demonstrate their rejection of such political practices. “In so doing they (the demonstrators) have all shown that they are united from all spectrums demanding a decent living.”

In an effort to quell the demonstrations, Lebanon’s coalition government Oct. 21 approved a package of economic reforms that reportedly included a plan to overturn the new taxes and cut by half the salaries of top officials.

Melkite Patriarch Joseph Absi also declared his solidarity with the people “who express today their pain and bitterness and loss of confidence in those who brought them to this bitter reality.”

He appealed to government officials “to respond to the demands of the Lebanese people and not drown them with promises, after reaching the brink of despair.”

Patriarch Absi emphasized that “serious reform and the elimination of waste and hot spots of corruption and respect for the dignity of the citizen is urgent and necessary to restore confidence in officials and the salvation of the homeland.”

Syriac Catholic Patriarch Ignace Joseph III Younan offered his support to the protesters’ demands as well. “We appeal to the consciences of officials, if there is a conscience in this world of hypocrisy, to be within the responsibility assigned to them,” he said.

He urged officials to “listen to the voice of the people, and immediately undertake the necessary and fundamental reforms,” including fighting corruption and holding the corrupt accountable, ending the theft of public money, stopping waste in state facilities and refraining from imposing any tax increase.

“We ask God to inspire officials to get out of this current crisis and to implement the demands of the people, to return to Lebanon its peace, security and prosperity, and to its citizens to reassure, stability and a decent life, through the intercession of our mother, the Virgin Mary of Lebanon, and all the saints and martyrs,” he said.

In affirming their solidarity with the demonstrators, each patriarch pointedly called for maintaining peacefulness and rejected any violent means or destruction by protesters. “We are well aware of the role of the fifth column,” Cardinal Rai cautioned, referring to groups that foment violence.