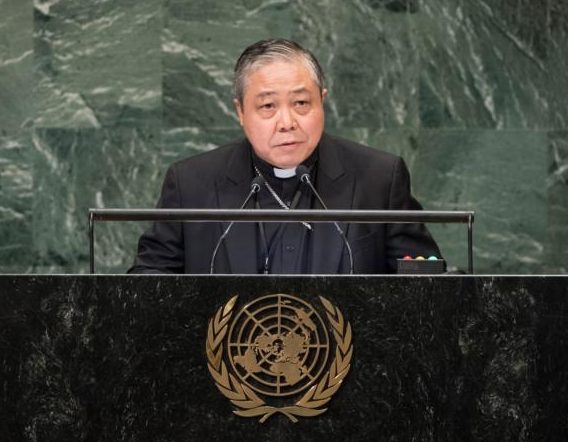 Archbishop Bernardito Auza, the Vatican's permanent observer to the United Nations, is pictured speaking at the U.N headquarters in New York City Oct. 2, 2018. In an address at the U.N. June 24, 2019, Archbishop Auza called for fostering tolerance and inclusivity to counter terrorism and "other acts of violence based on religion or belief." (CNS photo/Kim Haughton, courtesy U.N.) 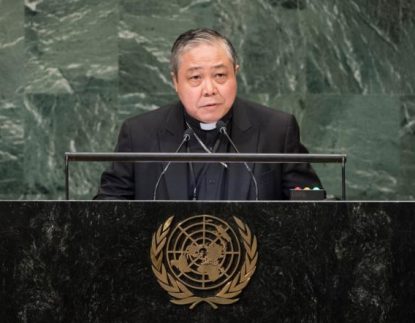 UNITED NATIONS (CNS) — Filipino Archbishop Bernardito Auza, head of the Vatican’s permanent observer mission to the United Nations, called for the U.N. to uphold the dignity of women, and also to safeguard the “inherent dignity and inalienable rights” of the human person when dealing with financial issues before the U.N.

Archbishop Auza’s addresses were delivered Oct. 7 and 8 before the U.N. General Assembly.

“Much remains to be achieved” in advancing “the participation of women in social, political, economic and cultural life, and in ending violence against women and girls,” Archbishop Auza said in his Oct. 7 remarks.

Quoting Pope Francis’ 2013 apostolic exhortation “Evangelii Gaudium,” the archbishop added, “The Holy See remains deeply concerned by the violence and discrimination faced today by migrant women in particular, including female migrant workers, who ‘endure situations of exclusion, mistreatment and violence, since they are frequently less able to defend their rights.'”

He noted the U.N. secretary-general’s July report on violence against women migrant workers, saying: “Female migrant workers, especially those with irregular migration status, are not only at risk of labor exploitation, but also face broader social exclusion. These women deserve to be welcomed, protected and integrated within our communities with dignity. They also deserve full and equal recognition before the law, including through access to the justice system.”

Archbishop Auza also took note of an interview Pope Francis conducted in May with a Mexican journalist in which he said, “The world without women doesn’t work.”

“The Holy See insists on equality in dignity between men and women and on equal respect at all stages of their lives,” Archbishop Auza said, repeating St. John Paul II’s 1995 message to the U.N.’s Fourth World Conference on Women, held in Beijing: “There will never be justice, including equality, development and peace, for women or for men, unless there is an unfailing determination to respect, protect, love and serve life – every human life, at every stage and in every situation.”

Archbishop Auza’s Oct. 8 message to the U.N. was on economic and financial issues, and it was delivered by Msgr. Fredrik Hansen, first secretary at the Vatican’s U.N. mission.

The Vatican welcomes “the growing attention given to sustainable, equitable and integral development,” the archbishop said in the message. “This broader approach to economic and financial activity highlights that the starting point of the work of the U.N. is not a profit-driven and utilitarian economic model, but rather the human person as a whole and the common good of all peoples.”

He added his hope that the U.N. general committee charged with economics “will focus its work on the crucial tasks assigned to it, such as economic growth and macroeconomic policy, the eradication of poverty, financing for development, the promotion of sustainable development, agriculture development, food security and nutrition.”

“The specific considerations on human rights and fundamental freedoms, including the meaning of ‘rights,'” Archbishop Auza said, are “best left” to another committee. “To advance this work and facilitate the broader revitalization of the work of the General Assembly, each committee must remain focused in its discussions and draft resolutions,” he said.

Pope Francis, in reflecting on the 70th anniversary last December of the U.N’s Universal Declaration of Human Rights, “underscored that a ‘reductive vision of the human person opens the way to the growth of injustice, social inequality and corruption,'” Archbishop Auza said, “whereas respect for the inherent dignity and of the equal and inalienable rights of all members of the human family is the foundation of freedom, justice, peace and integral human development.”

NEXT: Vatican releases lineup for Christmas concert supporting the Amazon