Prince praises St. Newman; others promote him as ‘doctor of the church’ 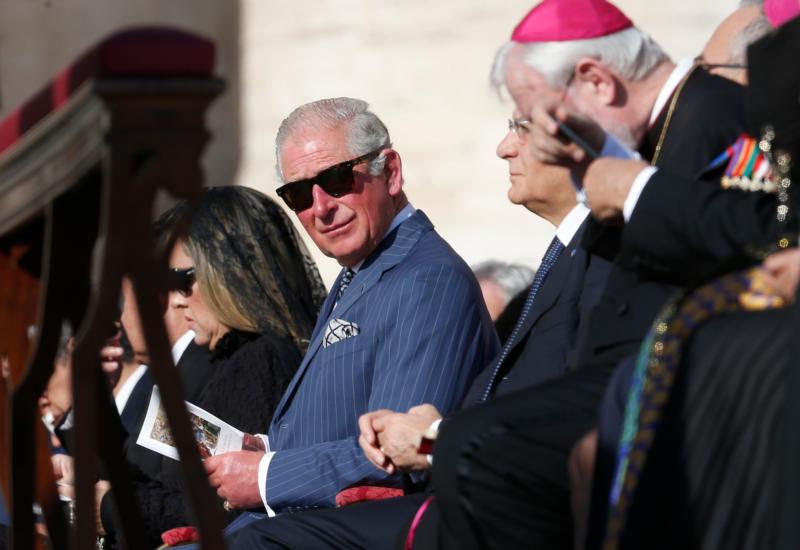 Britain’s Prince Charles waits for the start of the canonization Mass for five new saints celebrated by Pope Francis in St. Peter’s Square at the Vatican Oct. 13, 2019. (CNS photo/Paul Haring)

VATICAN CITY (CNS) — On the eve of the canonization of St. John Henry Newman, Britain’s Prince Charles penned an article about England’s newest saint for the Vatican newspaper.

St. Newman’s example, he wrote, “is needed more than ever for the manner in which, at his best, he could advocate without accusation, could disagree without disrespect and, perhaps most of all, could see differences as places of encounter rather than exclusion.”

The article was released as a conference about St. Newman was ending at the Vatican with a cardinal calling for the declaration of the 19th-century theologian, poet and pastor as a “doctor of the church.”

Prince Charles, who as future king of England also is the future head of the Church of England, attended the Mass and canonization of St. Newman and four others Oct. 13 in St. Peter’s Square. A large delegation of Anglican priests and bishops joined him at the Mass to honor the British saint who had served as an Anglican priest before joining the Catholic Church.

Christians should not be afraid of differences, Prince Charles wrote, after all, “harmony requires difference. The concept rests at the very heart of Christian theology in the concept of the Trinity.”

“As such,” he said, “difference is not to be feared. Newman not only proved this in his theology and illustrated it in his poetry, but he also demonstrated it in his life. Under his leadership, Catholics became fully part of the wider society, which itself, thereby, became all the richer as a community of communities.”

Prince Charles also looked at St. Newman’s work as a theologian, especially his teaching about “the development of doctrine,” which, the prince said, “showed that our understanding of God can grow over time.”

His emphasis on the importance of individual conscience was another area of St. Newman’s thought mentioned by Prince Charles. “Those who seek the divine in what can seem like an increasingly hostile intellectual environment,” he said, “find in him a powerful ally who championed the individual conscience against an overwhelming relativism.”

At a symposium held Oct. 12 in the Casina Pio IV, the building in the Vatican Gardens that is home to the Pontifical Academy of Sciences, Canadian Cardinal Marc Ouellet said St. Newman should be declared a doctor of the church.

Currently about three dozen saints, including four women, hold the title in recognition of their contributions to theology and spirituality. They include such luminaries as Sts. John Chrysostom, Augustine, Thomas Aquinas, Bonaventure, Catherine of Siena and Therese of Lisieux.

“The depth of this man of God and the place he now occupies in Catholicity make us aware of the void his absence would have left if he had not been,” Cardinal Ouellet said.

Advocating for recognition of St. Newman as a doctor of the church, the cardinal particularly pointed to the new saint’s teaching that “in order to keep its integrality, the faith of the church must adapt its language to the cultural challenges and the dangers of heresy.”

St. Newman’s teaching on the development of doctrine held that “although the deposit (of faith) does not change, the church’s knowledge of it progresses, deepens and is expressed in a new way, always faithful to the original idea,” the cardinal said.

Father Ian Ker, author of more than 20 books about St. Newman, told Catholic News Service in Rome Oct. 12, “What’s especially important for me is this (canonization) enables him to be made a doctor of the church, because I believe he is the doctor par excellence of the post-conciliar period like St. Robert Bellarmine is of the Tridentine period.”

Gregory K. Hillis, a professor of theology at Bellarmine University in Louisville, Kentucky, who attended the canonization, agreed, telling CNS that St. Newman’s attempts to “rediscover early Christianity and the wealth it could provide the contemporary church” had a strong impact on Vatican II’s attempts “to conserve the whole tradition, not just medieval expressions of it.”

“Newman does not fit comfortably into the traditionalist camp nor the progressive camp,” he said. “Traditionalists need to remember Newman’s willingness to speak up to the hierarchy, his willingness to draw upon more than just medieval sources, and the progressives can learn from the seriousness with which he took the tradition and engaged with it.”