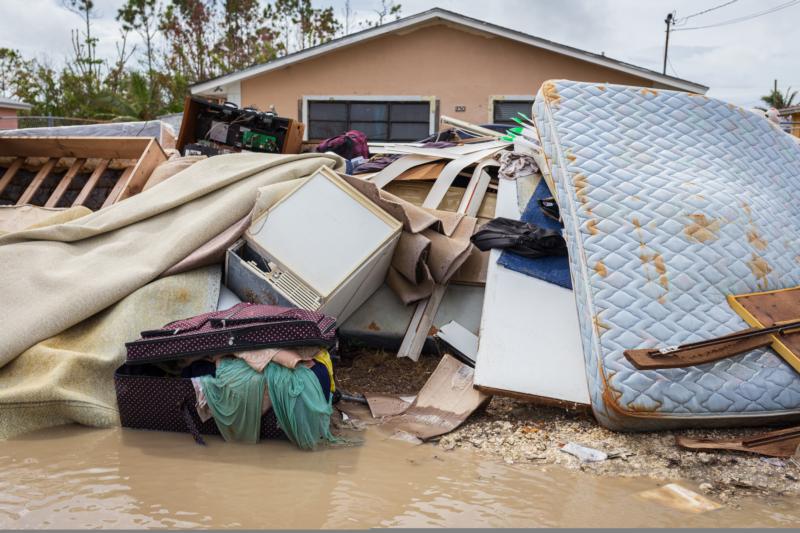 In the Hudson Estates neighborhood of Freeport, Grand Bahama, near Mary, Star of the Sea Church, mostly ruined personal belongings are seen drying in the sun Oct. 8, 2019, more than a month after Hurricane Dorian hit the Bahamas. The area was heavily damaged by the storm’s surge-related flooding throughout Grand Bahama. (CNS photo/Tom Tracy)

FREEPORT, Grand Bahama (CNS) — “After the storm” — a phrase undoubtedly used for generations in the “Hurricane Alley” of the warm-water Atlantic — carries added meaning following Hurricane Dorian’s historic landfall more than a month ago.

“We’ve been through a horrific hurricane and I don’t think we will ever forget this one. I have not experienced anything like this in my lifetime and I have been around for a little while,” said Patrick Ferguson, a retired national radio broadcaster in the Bahamas and a longtime member of Mary, Star of the Sea, the so-called mother parish on Grand Bahama.

After Abaco Islands, this region of the Bahamas was the hardest hit by the Sept. 1-3 hurricane.

At the start of what was the first week with restored electrical power at “Mary, Star,” as it’s known by locals, Ferguson, along with a core staff and volunteer team, reflected on how Hurricane Dorian has transformed the parish and its Society of St. Vincent de Paul outreach into a de facto emergency food and supplies outpost for the wider neighborhood.

Donated provisions and supplies have been pouring in over the past few weeks, including the first of two shipments of donations made possible by the Archdiocese of Miami’s special collection for the Bahamas, now exceeding $200,000, according to Peter Routsis-Arroyo, CEO of Miami’s Catholic Charities.

But it also has been a time to think about the fragility of life and how Hurricane Dorian claimed homes, lives and livelihoods, impacting an estimated 75,000 and leaving some 600 still on the government’s official list of missing persons. Most of them are from Great Abaco, but some are from Grand Bahama as well.

During the hurricane, Ferguson got a call from his daughter telling him that the flooding was coming into Freeport from the north of Grand Bahama. He gathered up his family — including his 93-year-old mother-in-law, who uses a wheelchair — and moved them to a shelter.

“The roof on the backside of our house is gone, so we are trying to rebuild that now and have that covered with a tarp, and we like to get that settled because we have the Advent season coming up — and it will be a rough Christmas season this time around for many, many souls,” he said.

“Dorian also teaches us some things: We need to be humble and stop loving things and start to love other people; and for all our parishioners and citizens to realize that man is not in control, God is in control,” Ferguson told the Florida Catholic, Miami’s archdiocesan newspaper.

He serves as Boy Scout master for Grand Bahama and said that some of the Scouts went door to door during the storm to check on the elderly, rescuing many from the rising storm surge.

Out behind Mary, Star’s church are several trailers that carried in the donations from South Florida. As soon as they arrived, staff and volunteers unpack the products and repackage the goods as care bags, and make it easier to get supplies into hard-hit suburbs and to more remote communities and to accommodate local families dropping in for canned goods, bottled water, sanitary items, baby supplies and even cleaning supplies.

Hot daily meals are getting to the Grand Bahama community courtesy of World Central Kitchen, a nonprofit devoted to providing meals in the wake of natural disasters.

“As of now, and until (Nassau) Archbishop Patrick Pinder tells us his needs have changed, everything we send is shipping between Nassau, where Archbishop Pinder is working closely with the local shelters on New Providence, and Mary, Star of the Sea in Freeport, which is a major relief site,” said Routsis-Arroyo.

In addition to the aid Miami Catholic Charities is providing, some individual parishes in Miami have been sending over their own relief shipments.

Residents coming to Mary, Star for supplies are being met by Shurn Sawyer, parish outreach director, who is managing the distribution. She also is a countrywide director for the Society of St. Vincent de Paul in the Bahamas.

Sawyer points toward where the flood water had risen several feet up the inside walls of the parish office but largely spared the main church structure. Next door at Mary, Star of the Sea Catholic Academy, contractors have already ripped out water-damaged materials and begun replacing interior walls and damaged roofing.

Though not as devastated as the east of Grand Bahama, many in this part of the island have lost everything — homes, cars and personal belongings — to the flood waters, Sawyer said.

“And some of them are just walking around in a daze. We lost a lot of lives and even though I didn’t lose anyone in my family, I feel it, and you hear a lot of stories,” she said, noting how it seemed to her that the church’s weekly and daily scriptures and readings leading up to Hurricane Dorian seemed to relate to the harsh fate in store for the Bahamas this year.

“We have Mass every morning and then we have what we call ‘church after church,’ where older members meet and talk about Scriptures — and how amazing it seemed to fit in just before Dorian and how we are not supposed to lose hope,” she said.

Some, especially those with school-age children, have gone away temporarily to Nassau or various places in the United States, and are slowly starting to return. Others are enrolling children in schools elsewhere since the public schools in Grand Bahama have not announced a reopening date.

In the Freeport business community, many of the retailers are closed, including, crucially, several building materials and grocery stores along with a lot of mom-and-pop businesses that provided employment and materials for the local economy.

Among employers struggling to get back to normal is the Rand Memorial Hospital in Freeport, which was partially flooded. It is now operating outdoors under tents with the assistance of foreign nongovernmental organizations and medical volunteers.

Meanwhile, in South Florida, parishes continue to collect resources for the Bahamas. Catholic Charities USA has provided some funds to assist Bahamas evacuees to the U.S., according to Routsis-Arroyo.

NEXT: Ecuadorians at synod keep eye on massive protests at home