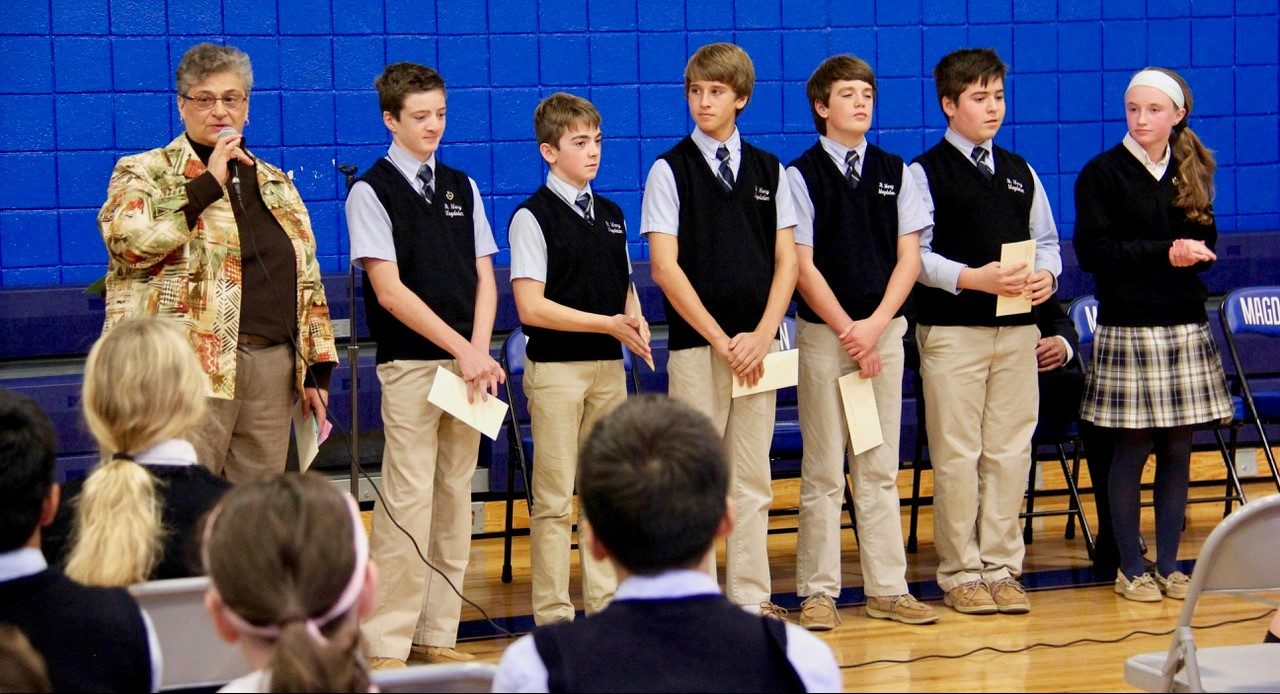 Denise Winterberger, principal of St. Mary Magdalen School in Media, introduces the six student winners of the competitive Neumann Scholarship Program of the Connolly Foundation, which awards them full tuition for four years at any archdiocesan high school. (Photo by Kerry Boyle)

Is there something in the water in Media, Delaware County?

Consider this: Only 26 of the approximately 4,000 eighth graders in Catholic schools in the Philadelphia Archdiocese (not including private Catholic academies) attend St. Mary Magdalen School in Media.

And of those 26, six have been named Neumann scholars – the most from any one school in the history of the annual Catholic high school scholarship program conducted by the Connelly Foundation.

Considering there were just 41 scholarships awarded across the archdiocese and more than 600 high-achieving eighth graders from throughout the five counties sat for the examination, that is some achievement.

Of course their parents were also big winners because the scholarships, which amount to $7,800 a year for four years (the archdiocesan high school average tuition) represent a savings of $31,200 for each family.

While Denise Winterberger, the principal of St. Mary Magdalen School, is elated that her students broke the record for the number of winners from a single parish school, she credits good teaching, motivated kids and involved parents.

A celebratory (and record breaking) #WednesdayWatching livestream video from St. Mary Magdalen School in Media (Delaware County) where it was announced this morning in front of faculty, staff, and 6th, 7th, and 8th grade students that they had six (a new record for students at one school!) out of the 35 Neumann Scholars this year. The exciting news was delivered by Trustees and representatives of the Connelly Foundation including Mrs. Josephine C. Mandeville, Board Chair. They were joined by Rev. Monsignor Ralph J. Chieffo, Pastor and Mrs. Denise Winterberger, Principal as well as Mrs. Bernedette Dougherty, Assistant Superintendent of Elementary Schools for the Archdiocese of Philadelphia, Office of Catholic Education (OCE). According to the Connelly Foundation website, "Initiated in 1995, this scholarship program identifies academically talented eighth grade students in the parochial school system through an independently administered competitive examination and provides four year scholarships to attend one of seventeen Archdiocesan high schools. 900 eligible eighth grade students, on average, compete for this scholarship, representing 112 parochial grade schools in five counties35 eighth grade students who excel on the Neumann Scholars exam will be awarded four-year scholarships to the Archdiocesan high school of their choice. 153 Neumann Scholars currently attend Archdiocesan high schools."For more information on the Neumann Scholars program visit: https://www.connellyfdn.org/signature-programs/neumann-scholarsPrayerful best wishes to all of the eighth graders named Neumann Scholars this year and their families across the Archdiocese of Philadelphia.#EquippingSaints #ExploreAOPS #WednesdayWisdom #NeumannScholars

Posted by Archdiocese of Philadelphia Schools – AOPS on Wednesday, November 13, 2019

Just last year the U.S. Department of Education recognized St. Mary Magdalen as a Blue Ribbon School of Achievement. Possibly because of this, there was a nice bump in enrollment this year, and with this latest achievement it may well happen again next year.

The Connelly Foundation, which funds the annual scholarships, was founded by the late industrialist and self-made millionaire John Connelly, along with his wife, the late Josephine C. Connelly.

Both came from working-class parishes in Philadelphia and John Connelly had to quit school at an early age, according to his grandson, Thomas Riley, who is now the president of the Connelly Foundation.

A primary beneficiary of the millions of dollars the Connelly Foundation doles out annually is the Catholic schools of the archdiocese. These may be in the form of direct grants to schools for specific needs or through scholarship programs that provide the archdiocesan high schools with a steady stream of highly motivated students.

The families of many of those students may not have been able to afford secondary non-public education and might otherwise have gone elsewhere.

Every graduated Neumann Scholar to date has gone on to a college or university and more than 300 were either National Merit Finalists or commended students based on their SAT scores, according to Connelly Foundation statistics.

Unlike the Neumann Scholars, the Josephine C. Connelly awardees receive grants equal to 40 percent or the average archdiocesan high school tuition, which can be raised in the upper years. But because many more Connelly awards are given than are Neumann scholarships, the funding for both programs is about the same.

Also, while the Neumann scholarships are archdiocesan-wide, the Connelly Achievement Awards are limited to eighth graders in Philadelphia County, because of the greater poverty rate in the city compared to the suburbs. However according to Tom Riley that may change in the future to include other areas experiencing poverty.

The Connelly Achievement Awards are not based on a competitive examination but chosen by recommendation from the pastor and principal. These may be kids who actively volunteer for programs, show leadership, have the ability to bring others together or possess a special nonacademic talent. They well may be near the top of their class but not necessarily.

Like the Neumann Scholars, the Connelly Achievement awardees can pick any of the archdiocesan high schools of their choice, or opt for Mercy Career and Technical School.

“I like to say one program is purely academic and the other is from the heart,”  Riley said.

In both programs the Connelly Foundation does not just give the students a grant and move on. The foundation has an in-house team that follows the students through their high school career and assists them as they plan their future.

Looking at the Neumann Scholarship Program, the foundation’s statistics show out of 833 graduates in the program more than 300 scholars went on to be National Merit Finalists or National Merit Commended Students, and there has been 100 percent college attendance.

Meanwhile on Nov. 13, St. Mary Magdalen School’s scholars received a congratulatory visit by Josephine Mandeville, the chair of the Connelly Foundation, and past president Thomas Connelly; they are the daughter and son of John and Josephine Connelly.

Now the five young men and one young lady who won one of the scholarships have to think of which Catholic high school they will attend.

“I’m proud of myself for getting this far, I was surprised,” Michael Foster said. “Right now it looks like I will be going to Cardinal O’Hara High School, or I might go to Archbishop Carroll. That I haven’t decided yet.”

Cassidy Martin was also excited to win the scholarship, considering the many students who took the test. She too is looking at Cardinal O’Hara High school, and maybe in the future studying for the medical field after that.

As for winning the scholarship, she credits St. Mary Magdalen School. “The teachers here are the best,” she said.

The same can be said for the Connelly Foundation, which generally shuns publicity, but is definitely one of the best. 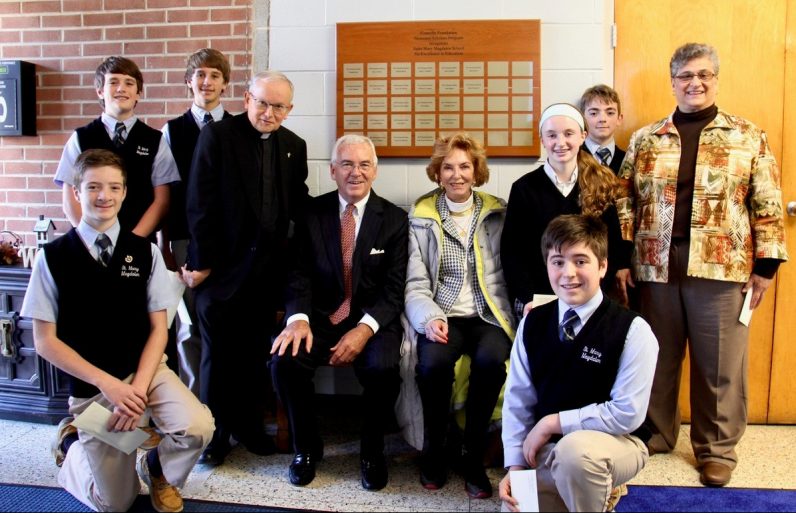 Along with the six Neumann Scholarship Program winners at St. Mary Magdalen School in Media are Msgr. Ralph Chieffo (fourth from left), pastor of St. Mary Magdalene Parish; past president of the Connolly Foundation Thomas Connelly and his sister, Josephine Mandeville, chair of the Connelly Foundation (center); and Denise Winterberger (right), principal of the school. (Photo by Kerry Boyle)