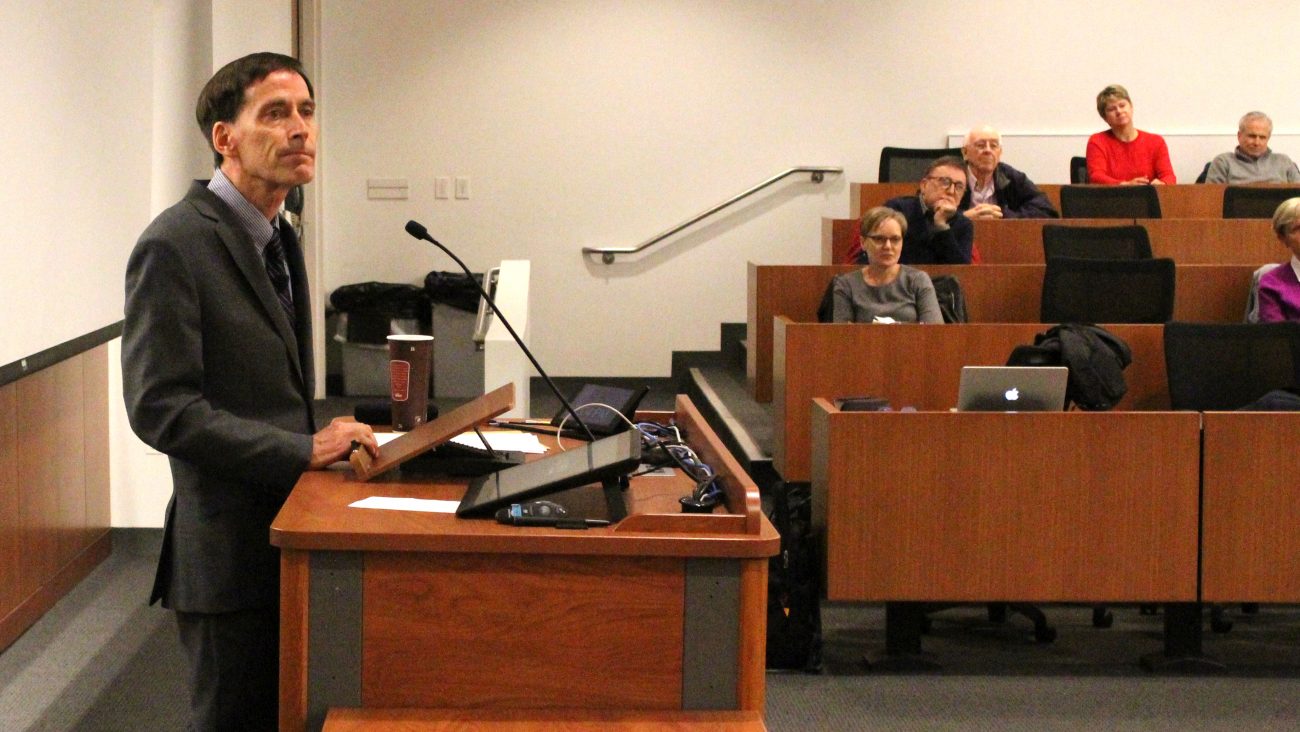 Father Richard Lennan, a professor of theology at Boston College, listens during a question and answer session to a participant in the first of four conferences at Villanova University Nov. 1 on the theological perspectives of the clergy sexual abuse crisis. (Photo by Matthew Gambino)

Since the sexual abuse crisis in the Catholic Church broke open in 2002 in the United States and intensified globally last year, responses to it have focused on legal matters and administrative reforms.

But theologians and other faithful thinkers are focusing now on a higher dimension, and the question of where God is calling his people at this moment.

Villanova University launched the first in a series of four conferences on the theological perspectives of the sexual abuse crisis Nov. 1. Some 20 Catholic scholars from around the world heard a dozen presentations on the topic in a day-long seminar, according to Villanova professor Massimo Faggioli, a lead organizer of the series. (Read more about the series here.)

In a keynote talk to cap the first conference, Father Richard Lennan said the long-term response of the Christian community to the crisis should be an inner conversion of heart and fearless self-criticism — and not only among bishops and clergy, but all members of the church.

A professor of theology at Boston College and a priest of the Diocese of Maitland-Newcastle in Australia, he told 25 people, including scholars and visitors from the community, why conversion is critical at this time.

“A theological response to the abuse crisis recognizes that (it) is not simply an issue of governance, formation for ministry or pastoral practice. The sexual abuse crisis gnaws at the faith,” he said. “It casts a pall of suspicion over belief in a capacity of any human instrument, let alone the church, to mediate grace.”

Father Lennan found in the working document of the recent Synod of Bishops on the Amazon a three-point formula that he believes may serve as a road map for the church’s conversion. A process of unlearning, learning and relearning can facilitate a renewed openness to grace and conversion.

(Watch a video of the talk below.)

Unlearning involves not only responding to criticism rising from the sexual abuse crisis, including calls for greater accountability and transparency among the church’s leaders, but broader participatory decision-making on the part of the nonordained church members.

Father Lennan observed that unlearning has “often been resisted by various segments of the church or stigmatized as the church succumbing to worldly (notions).”

But unless the church’s own resources “can prompt and sustain self-criticism and reform, the church has no future.” Not that the church will cease to exist, but it will not be what it must be: “characterized by a relationship between baptized believers and grace.”

The church does have the resources to deploy self-criticism, and the leaders who are most in need of unlearning can benefit from the “light shone on certain styles of episcopal leadership” from the sexual abuse crisis, Father Lennan said.

Learning involves listening in humility, said Father Lennan, referencing Pope Francis’ observation that if Christians “do not leave room for questions, the church becomes a museum” that is “closed to the present and the future.”

The voices of survivors of clergy sexual abuse, the priest said, must be heard with compassion because they are a summons toward conversion.

Relearning involves returning to God along the path of discernment as “an integral aspect of discipleship” and a way to “discover again and again the God who is the opposite of the complacency that blunts the call to conversion,” Father Lennan said.

He suggested one example of relearning is to rethink church tradition not as a barrier to change but as a “deep and lonely soil that feeds further growth” so that it becomes “an instrument of reform as well as preservation” for the church.

In the tradition of the church, the shining models of discipleship were the saints, who are on “the right side of history” as the church seeks to be because of their ongoing conversion, Father Lennan said.

“This fact,” he said, “can nurture hope for the present day church through self-critical reflection, through the unlearning, learning and relearning that conversion requires (and) through a renewal of the discipleship that characterizes effective conversion.”

The good news proclaimed by the church “can change the world but it must first and always change the church,” he said.

His talk ended the day’s seminars on the abuse crisis, which participant Dawn Eden Goldstein found “was a great way to bring theologians together, to network and find others who are working to help the church problem-solve at this moment of crisis,” she said.

Agreeing with her assessment was Sulpician Father Martin Burnham, a social scientist who has researched clericalism. “The conversations all around the abuse crisis really did wrap very nicely together even though no person came necessarily with the same topic,” he said, and all the speakers “really did zero in on the issue as it stands right now.”

He found hope in the fact that “people are still engaging the topic in very creative ways.”

The Villanova task force plans three more conferences at the university, which are free and open to the public, on the theological responses to the clergy sexual abuse crisis.

On Dec. 5 a three-person panel including Father Lennan plus Catholic theologians from Canada and Australia will speak on “A Light for a Church in Crisis: Vatican II in the Time of Pope Francis.”

The series of conferences concludes on March 21, 2020 with “The Church Today,” a day-long, multi-session seminar that will end with a Mass dedicated to survivors of sexual abuse in the church.

Villanova philosophy professor and lead organizer of the final conference, Sally Scholz, said she hopes lay people, clergy and religious “from around the region will take advantage of the opportunity to participate in this important dialogue.”

The importance of that dialogue was underscored by Father Lennan’s observation that “The church listens to the Spirit when all the members listen to one another.” 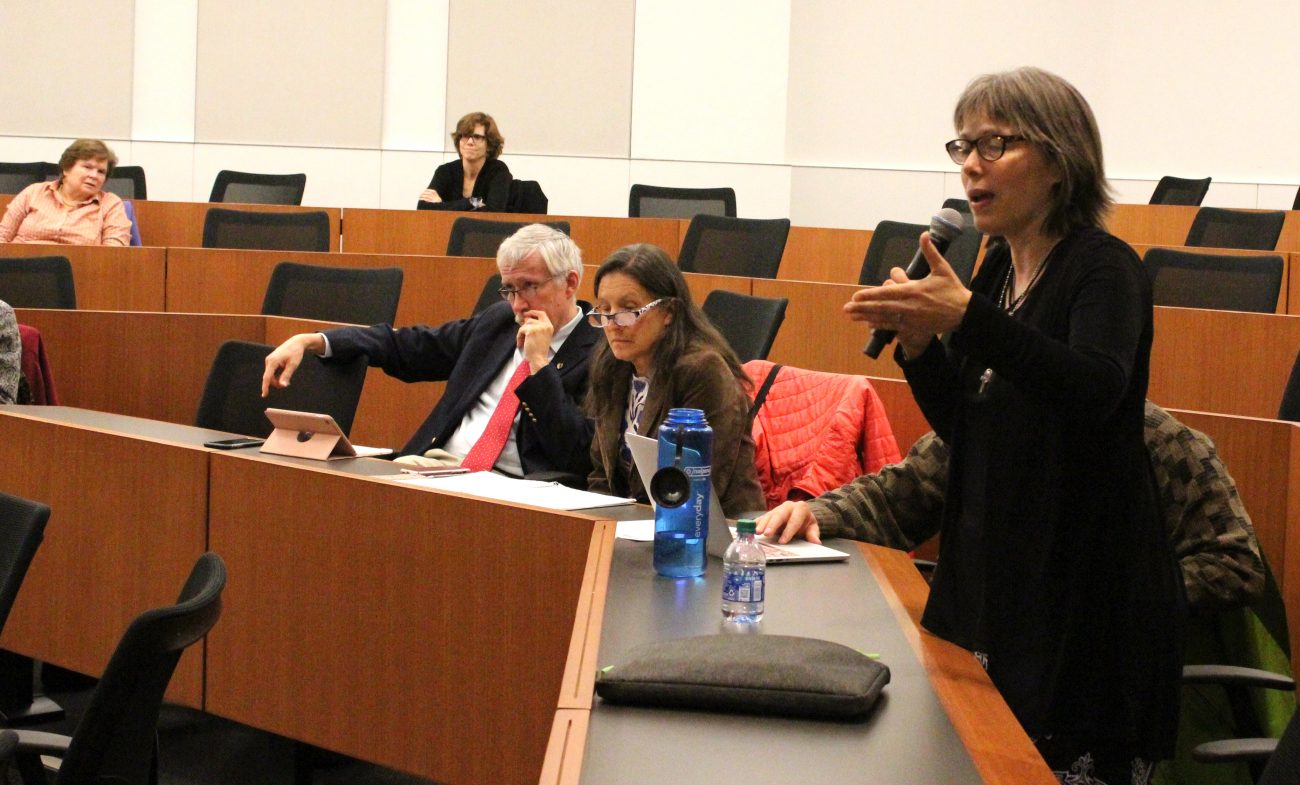