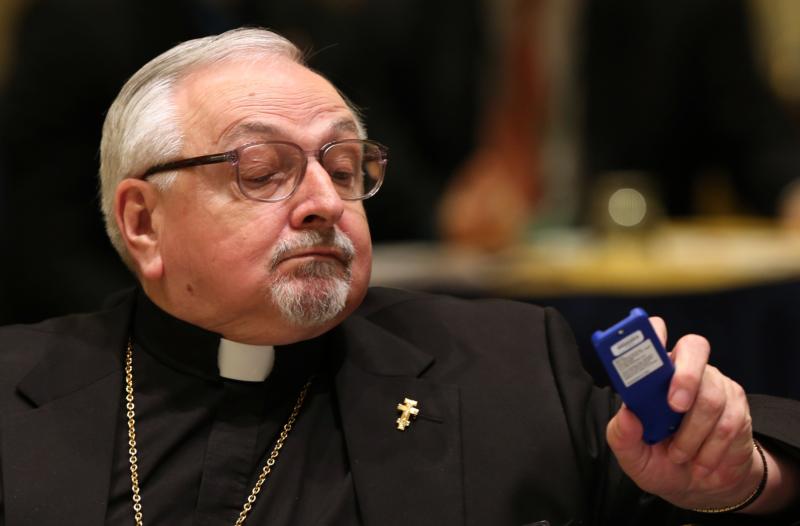 In this 2014 file photo, Auxiliary Bishop John Bura of the Ukrainian Catholic Archeparchy of Philadelphia casts his vote during the annual fall general assembly of the U.S. Conference of Catholic Bishops in Baltimore. Pope Francis accepted Bishop Bura’s resignation Nov. 15, 2019. He is 75, the age at which canon law requires bishops to submit a letter of resignation. (CNS photo/Bob Roller)

UPDATED – WASHINGTON (CNS) — Pope Francis has accepted the resignation of Auxiliary Bishop John Bura of the Ukrainian Catholic Archeparchy of Philadelphia. He is 75, the age at which canon law requires bishops to submit a letter of resignation.

The resignation was announced in Washington Nov. 15 by Archbishop Christophe Pierre, apostolic nuncio to the United States.

Bishop Bura has served as the auxiliary bishop of the Archeparchy of Philadelphia since 2006. From 2009 to 2014, he served as apostolic administrator of the Eparchy of St. Josaphat in Parma, Ohio.

“Bishop John is a kind and noble man who has served God, the church and the community at large with dedication, both as a priest and as a bishop,” said Metropolitan-Archbishop Borys Gudziak, head of the archeparchy and metropolitan of Ukrainian Catholics in the United States.

“Throughout a life that began in great danger and hardship, he remained faithful,” the archbishop said in a statement. Since his own enthronement in June as head of the archeparchy, Archbishop Gudziak said, “Bishop John has been for me a most valuable and reliable guide for understanding the pastoral history and current issues of our archeparchy.

He added: “Our prayers are that the Lord will grant him good health and longevity in retirement as he begins this new chapter in his life.”

Bishop Bura was nominated Jan. 3, 2006, to be auxiliary bishop of the Philadelphia archeparchy by Pope Benedict XVI upon the recommendation of the Ukrainian Catholic Synod of Bishops.

He was ordained a bishop by Cardinal Lubomyr Husar Feb. 21, 2006, in the Ukrainian Catholic Cathedral of the Immaculate Conception in Philadelphia. The principal co-consecrators were now-retired Archbishop Stefan Soroka of the Philadelphia archeparchy and Bishop Michael Kuchmiak of Great Britain.

Three years later, Bishop Bura was named apostolic administrator in Parma, serving in that capacity until 2014, when Bishop Bohdan Danylo was named to head that eparchy.

John Bura was born June 12, 1944, in Wegeleben, Germany, to Hryhoriy and Maria Bura. His parents were refugees on the move from Ukraine. Like hundreds of thousands of their countrymen, they were caught between the genocidal policies of the Nazis and Soviets. They were forced from their home in the midst of World War II.

The future bishop’s childhood was marked by devastation and displacement. Yet, throughout his life he was a man of serenity. In 1950, his family moved to the United States and settled in Jersey City, New Jersey.

From 1965 to 1970, he studied theology at The Catholic University of America and resided at St. Josaphat Seminary in Washington. He was ordained to the priesthood Feb. 14, 1971, for the Ukrainian Catholic Archeparchy of Philadelphia by Metropolitan-Archbishop Ambrose Senyshyn.

Following ordination, then-Father Bura served in various administrative positions including as a teacher of religion teach and the Ukrainian language and vice rector of St. Basil Minor Seminary, Stamford, and rector of St. Josaphat Seminary in Washington.

While he was pastor in Shenandoah, home of the first Ukrainian Catholic parish in the United States, the landmark church and adjacent rectory were destroyed by fire on Easter Monday April 7, 1980.

As a young priest, Father Bura provided the fatherly compassion needed to guide the parish family through this tragedy and led the rebuilding task. On Nov. 27, 1983, the cornerstone was blessed for the newly constructed St. Michael’s Church and the Divine Liturgy was celebrated for the first time in the new church.

The Ukrainian Catholic Archeparchy of Philadelphia includes the District of Columbia, Virginia, Maryland, Delaware, New Jersey and eastern Pennsylvania and has a total Catholic population of 13,944.

NEXT: A Catholic school first: 6 Neumann scholars named in Media