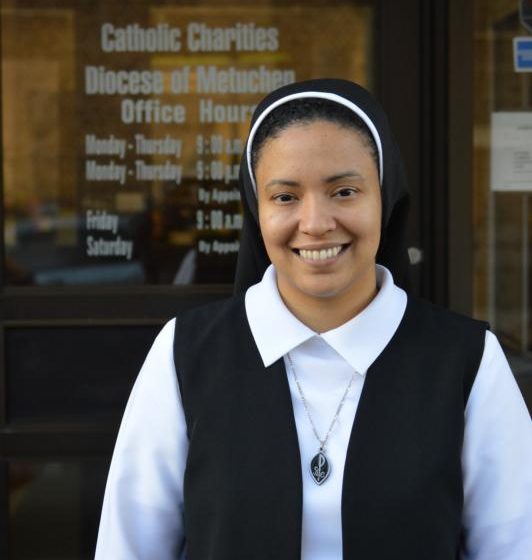 PERTH AMBOY, N.J. (CNS) — In 2013, while volunteering in India, Graciela Colon first heard the inner stirrings of Jesus calling her to a religious vocation.

For three weeks, she helped St. Teresa of Kolkata’s Missionary Sisters of Charity, minister to abandoned children, some of whom were severely disabled. They took the children off the streets and cared for them.

“It was a life-changing experience that gave me deeper insight into the preciousness of life,” Sister Graciela told The Catholic Spirit, newspaper of the Diocese of Metuchen. “Although I knew that I was not called to enter the Missionary Sisters, in the chaos of Calcutta, I felt such a deep peace that awakened in me the desire to become a religious.”

A native of the Dominican Republic, she was born in 1985. Her parents are Fior and Rafael Hernandez. She is her mother’s only child. Sugeirys Colon is her older half-sister. When she was 4, her family moved to New York, first to the Bronx then and later to Manhattan.

In 2007, Sister Graciela earned an undergraduate degree at Fordham University, majoring in political science at Lincoln Center in Manhattan. A year later, she began working with nonprofit immigration organizations including Wind of the Spirit Immigrant in Morristown, New Jersey. In 2010, she graduated from the Benjamin N. Cordozo School of Law in New York City and began a career as an immigration lawyer.

Upon returning home from India, she researched various religious communities on the internet and found one that she decided to visit — the Sisters of Christian Charity, Daughters of the Blessed Virgin Mary of the Immaculate Conception at the Mallinckrodt Convent in Mendham, New Jersey.

Members of the order labor in the fields of education, health care, parish ministry and social justice. Many work in the Diocese of Metuchen.

“I was drawn to the eucharistic spirituality and joy of the sisters and their enthusiasm. It felt like home to me,” she said of the visit.

In August, Sister Graciela pronounced her vows as a Sister of Christian Charity during the Liturgy of the First Profession. A month later, she began working as a lawyer at the Catholic Charities, Diocese of Metuchen’s Immigration Services, in Perth Amboy.

What she likes most about being a religious is being totally dedicated to God and to the service of his people in the church. She brings that sense of compassion to her clients, advocating for the poor and the immigrant who often suffer at the hands of unscrupulous attorneys and employers, and who may not speak English.

Sister Graciela, who speaks Spanish and serves many clients of Hispanic descent, also assists people born in Asia, Africa, Eastern Europe and the Middle East. Catholic Charities serves all regardless of religious affiliation.

As an immigration lawyer, Sister Graciela said it is an advantage being a religious because her clients trust her because of the good experiences that they had with religious sisters. Clients say, “As soon as I saw you, I knew that everything was going to be fine.”

While her daughter translated, one Middle Eastern woman who was a Muslim kept smiling at Sister Graciela. The woman had positive experiences with Catholic religious sisters who taught her.

What she likes most about her ministry as an immigration attorney is helping her clients to attain a sense of peace and reduce their anxiety, especially at this time.

“Once you’re able to obtain for them a benefit status in the U.S. or adjust their documentation, they’re able to move forward with their lives,” she said. It reduces the uncertainty of not knowing what is going to happen to them or to their children.

Sister Graciela finds it a blessing to reunite families. There are many rumors that create fear of deportation and she dispels the myths. “We find solutions whenever we can and if we can’t, we’re honest, tell them their rights, and give them some resources. We tell them there may be reform for status in the future,” she said.

For women discerning a religious vocation, she advises, “Cast out all fear,” as St. John Paul II said. “Jesus wouldn’t place a desire in your heart that he doesn’t want fulfilled.”

Zanko Komek is a correspondent for The Catholic Spirit, newspaper of the Diocese of Metuchen.