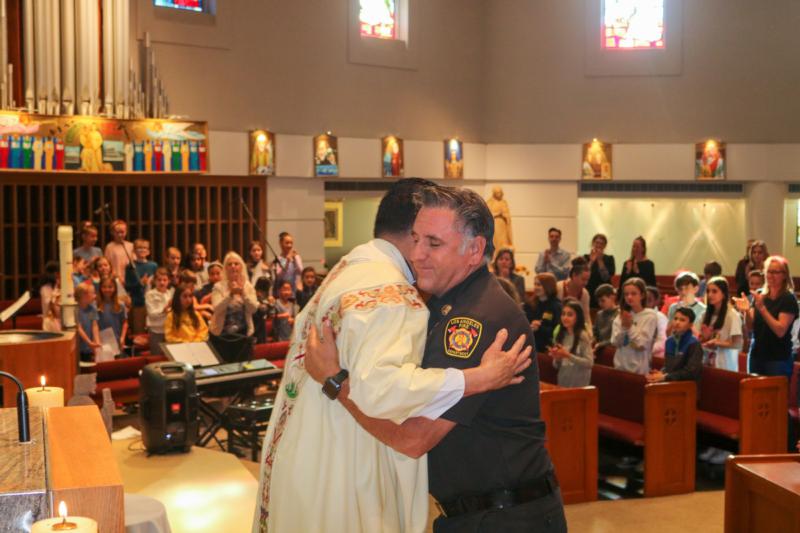 Father Paul Sustayta of St. Martin of Tours Church embraces Los Angeles Assistant Fire Chief Jaime Moore during All Saints’ Day Mass Nov. 1, 2019. The church, as well as many of the parishioners’ own homes, had been spared from the devastating Getty Fire due to the work of the firefighters. (CNS photo/Pablo Kay, The Angelus News)

LOS ANGELES (CNS) — For Catholics, the Nov. 1 solemnity of All Saints is a holy day of obligation, a day the faithful are obliged to receive the Eucharist as if it were a Sunday.

Students, parents and staff at St. Martin of Tours School in Brentwood had something else reminding them to thank God around the eucharistic table Nov. 1: Their church, and many of their own homes, had been spared from the devastating Getty Fire. This was their first day back at school since the fire broke out in the early morning hours of Oct. 28.

Specifically, their gratitude was directed toward Los Angeles Fire Department firefighters, who worked quickly to help evacuate families and protect homes in the Brentwood area from the fire.

“The firefighters did an incredible job getting this fire contained at a relatively fast pace, and we were able to hold it at 745 acres,” explained Jaime Moore, assistant chief of the Los Angeles Fire Department.

Moore sat in the first pew at St. Martin during the All Saints’ Day Mass celebrated for students of the parish school, representing the firefighters who had spent the week working around the clock to put out the Getty Fire and help families affected by it.

But this wasn’t his first time at the church. As a college student at UCLA years ago, Moore used to attend Mass there and even served as an adviser to the Brentwood parish’s youth group.

“God has mysterious reasons for the things that he does, and it’s almost full circle,” Moore said before Mass in an interview with Angelus, the news outlet of the Archdiocese of Los Angeles.

When St. Martin of Tours pastor Father Paul Sustayta called Moore the night before to tell him about the Mass, the veteran fireman got a funny feeling.

“I can’t help but think back to when I was a young 19-year-old, sitting in the pews as a college student, wondering and praying as to where my life would go,” Moore recalled. “So, it’s kind of nice to be able to come back and serve my community.”

At the beginning of Mass, Moore accepted a donation of $1,000 for the fire department from the school community, as well as a thick stack of letters and richly illustrated thank-you cards from students.

“I want to thank all of you, because I know it was difficult being away from home, worrying about when you were going to get home, especially right before Halloween,” Moore told the children.

Minutes later, duty called: Moore had to leave Mass early to help residents return to their homes — some of them destroyed — as final evacuation orders were being lifted.

One of the students affected by the fire was fifth-grader Stella Tesoriero. Her parents woke her up in the early morning hours of Oct. 28 as the wind-driven Getty Fire approached her street.

The Getty Fire burned within five houses of their home, but thanks to the quick work of firefighters (and some help from “Mother Nature,” in the words of Moore), it was saved. Others were not so lucky: At least eight homes were destroyed and another five damaged, according to fire officials.

“I wasn’t really panicked, because I knew the firefighters would help us,” said the fifth grader whose family stayed in a hotel that week. “I was just praying that our house and everyone else’s houses wouldn’t burn down, and that no one would get hurt.”

Principal Debbie Margoulis, who has worked at St. Martin of Tours for 27 years, said she can’t recall a fire that got so close and affected so many families.

She was alerted to the fire by a 3 a.m. phone call from a parent. She then called the pastor and within a short time, the school’s parents had all been notified of the fire and its corresponding evacuation zone, which included the school.

The principal said the school’s families were quick to help one another. One parent who works at a nearby hotel reserved a block of rooms for school families to stay in that week. Margoulis and several parents opened up their homes for evacuees to stay in.

“Families got together and stayed with families who weren’t evacuated, so it was really just a rallying point for the community,” she said.

The principal thought it was appropriate that the children’s first day back at school coincided with the holy day.

“Today’s a day when we celebrate the heroic virtue of the saints, and the firefighters remind me of that,” she said. “They are true heroes, and they really risk their lives to save property and lives.”

Kay is editor-in-chief of Angelus, the news outlet of the Archdiocese of Los Angeles.