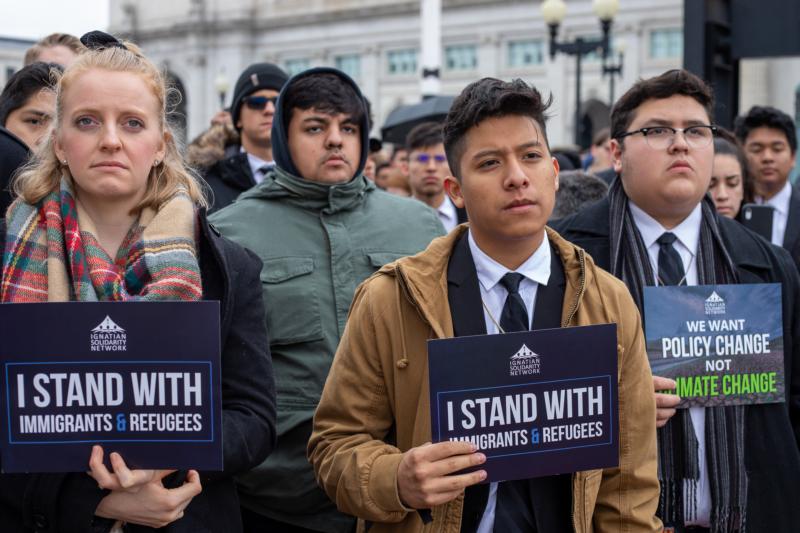 Elizabeth Bayardi, Brian Yslava Molina, Ivan Robles Barrera and Giovanni Montes Canales attend the Ignatian Solidarity Network “public witness” gathering near the U.S. Capitol in Washington Nov. 18, 2019. An advocacy day on Capitol Hill followed the rally, attended by 1,500 participants of a weekend teach-in on justice issues. The young people visited members of Congress to lobby on various issues and to put a face on the Development, Relief and Education for Alien Minors Act, or DREAM Act, which would grant residency status to qualifying immigrants who entered the United States as minors. (CNS photo/Doris Sump, courtesy Ignatian Solidarity Network)

WASHINGTON (CNS) — Three young adults of the estimated 700,000 with Deferred Action for Childhood Arrivals status remain undaunted after years of little to no action on their behalf in Congress and the courts, including the Nov. 12 Supreme Court hearing that could permit the Trump administration to cancel the program.

All born in Mexico, and all of whom arrived in the United States when they were age 5 or younger, the three young adults interviewed by Catholic News Service were part of an Ignatian Solidarity Network “public witness” gathering early Nov. 18 outside mere blocks from the U.S. Capitol on a plaza named, ironically, Columbus Circle.

Following a rally, the young adults and an estimated 1,500 participants from an Ignatian Solidarity Network weekend teach-in on justice issues — among them immigration and climate — visited members of Congress to put a face on the DREAM Act.

DREAM — an acronym for Development, Relief and Education for Alien Minors — is a bill that would grant residency status to qualifying immigrants who entered the United States as minors.

For Saul Rascon Salazar, 18, a freshman at Loyola Marymount University in Los Angeles, DACA and being in this country without legal documents didn’t enter the picture for him until he was 15.

Rascon told Catholic News Service that when he was 5, his parents brought him and his kid brother into the United States from Sonora state in Mexico because “the United States offers a higher sense of stability — and the violence in the city we grew up in.” His parents subsequently had a third, U.S.-born child.

He is now studying international relations at Loyola Marymount — Rascon said he wanted to continue “in the Jesuit tradition” after having attended Jesuit-run Brophy High School in Phoenix — and is active in the Dream On campaign, which advocates for youth and young adults who have DACA status or are DACA eligible.

Arlin Tellez, a sophomore at Trinity Washington University, has a double major in international relations and political science. She told CNS her life story might have had a role in her chosen fields of study.

Tellez, an only child, has few memories of Mexico, which she left at age 4. “Not very much,” she said about what she remembers. Her family settled in North Carolina. She added she would have liked to have stayed in the state to continue her education, but “North Carolina has a lot of restrictions.”

However, Tellez was able to attend Trinity as a recipient of a full-tuition scholarship from TheDream.US, which has provided scholarship aid to dozens of students at Trinity as well as hundreds of others at participating U.S. colleges and universities.

“Our faith keeps us strong,” Tellez said of herself and other DACA students at Trinity. She is not fazed over the Supreme Court hearing or what it might decide in the DACA case. President Barack Obama established the DACA program by executive order in 2012. At issue in the case before the court is President Donald Trump’s claim he has the authority as president to stop the program.

“Manmade laws are not the same as Jesus Christ’s divine law,” she said.

Jose-Arnulfo Cabrera, 24 — he is named after the martyred archbishop of San Salvador, El Salvador, St. Oscar Arnulfo Romero — came to Cincinnati from Oaxaca state in Mexico when he was 4. He attended a Jesuit high school and was able to attend Jesuit-run Xavier University, also in Cincinnati.

Cabrera said he can recall being conscious by seventh grade about his status in this country, which led to his current work as an activist and organizer with the Ignatian Solidarity Network. He remembers one day when DACA backers occupied “all the Obama (campaign) offices”; he had been one of those in Kansas City.

Then one day, “My mom called me on the phone. I can remember it, because I was working in a mechanic’s garage. She said, ‘He’s making the announcement right now'” on DACA.

Cabrera said having DACA status enabled him to pursue a life in issue activism, including spending one year with the Catholic social justice lobby Network. In his current job, he added, he also is able to help out his family financially, and give some aid for the college expenses borne by his younger sister.

He is not bothered by the possibility of a Supreme Court decision going against him, either. “I think it’s important to see so many fellow immigrants from around the country” outside the Supreme Court the day of the hearing, he said.

“The DREAM Act, it’s going to be law, and we’re fighting for it. We’re going to the bring the fight to them,” Cabrera said of lawmakers.

PREVIOUS: Archbishop Sheen will be beatified Dec. 21 at Peoria’s cathedral