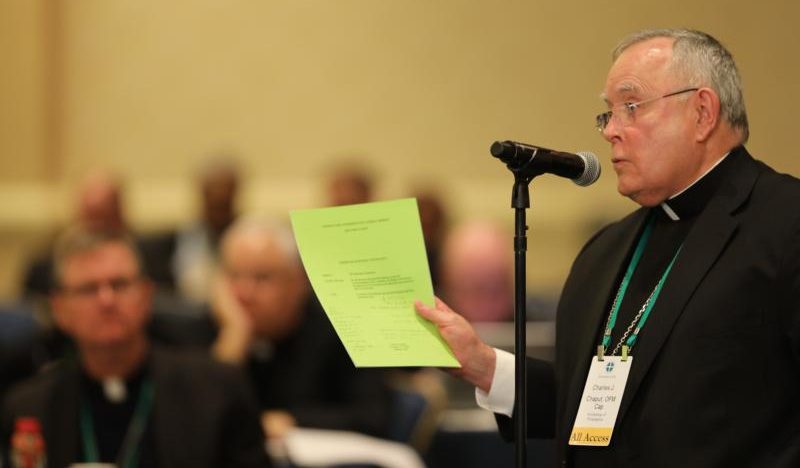 BALTIMORE (CNS) — A new “pastoral framework for marriage and family life” should be ready for a vote by the U.S. bishops by next November at the latest, according to Archbishop Charles J. Chaput of Philadelphia.

It may even be ready for a vote when the bishops meet in June 2020, said Archbishop Chaput, chairman of the U.S. bishops’ Committee on Laity, Marriage, Family Life and Youth.

Archbishop Chaput, speaking to the bishops Nov. 12 during their fall general meeting in Baltimore, made it clear the forthcoming document is not a “plan,” since it is intended to be applied within parishes and dioceses. “It was never meant to be a single comprehensive national plan but a resource towards the development of pastoral plans at the diocesan/eparchial levels,” he said.

The U.S. bishops first approved a pastoral plan on family ministry in 1978 and reaffirmed it in 1990. They also launched a National Pastoral Initiative on Marriage in 2005, and wrote a pastoral letter on marriage in 2009. In addition, “numerous statements, resources and initiatives have been offered over the years,” Archbishop Chaput said.

When Pope Francis issued his apostolic exhortation “Amoris Laetitia” (“The Joy of Love”) following the 2014 and 2015 synods on the family, the U.S. bishops decided to formulate a plan to buttress the “reception and implementation” of the results of the synods and the pope’s teaching, Archbishop Chaput said.

The framework will have four “pillars”: prayer and relationship with Jesus, formation, accompaniment and advocacy, he added. “Each pillar addresses areas or situations of need faced by couples and families today. Following a short description of the situation are suggested ways that a local pastoral plan might educate and encourage the faithful in these circumstances. Finally, pastoral strategies are suggested to engage audiences effectively.”

Next comes the implementation of a pastoral plan at the local level and the need to engage families themselves, the parish community, which Archbishop Chaput in quoting St John Paul II called “a family of families,” and broader collaboration with “all God’s faithful,” he said.

After the framework is approved, it will be augmented through publication of a resource guide that can be updated in an electronic version; regional convocations to identify and respond to the specific needs of couples and families; consultations offered to dioceses on request; and a development of a “leaders’ page” on the www.foryourmarriage.org website.

During discussion following Archbishop Chaput’s presentation, Cardinal Blase J. Cupich of Chicago said a discussion among the bishops on “Amoris Laetitia” would be helpful. Archbishop Chaput replied that such a discussion had been contemplated, but “a lot of things happened in the church, and that all disappeared. It got sidetracked by the response to (former) Cardinal (Theodore) McCarrick, and abuse issues and leadership issues.”

“I think we can have good discussion among ourselves,” he said.

Bishop Jaime Soto of Sacramento, California, said the process of local implementation needs to be rethought.

“We have the perspective that we’re going to have these services and we’re going to invite people to come,” Bishop Soto said. “I think we need to have a more of a spirit of ‘missionary,’ we go out and we consciously and deliberately think of where are the contexts of where need to be, not the traditional places where we do family catechesis and outreach.”

NEXT: Bishops urged to pay more attention to young people