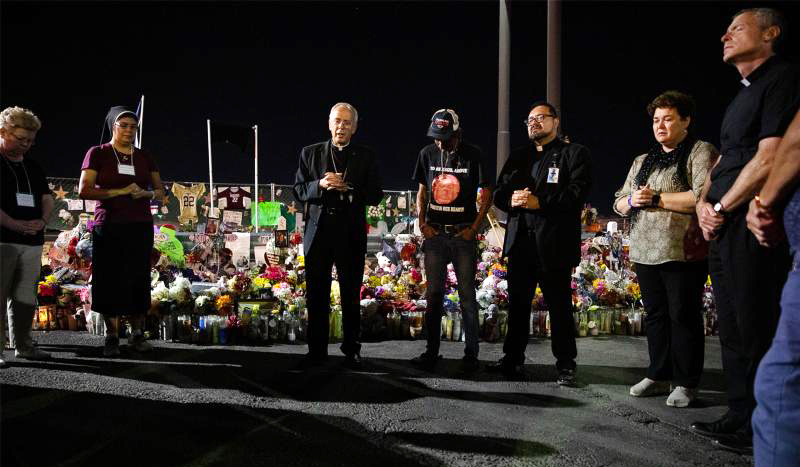 Bishop Mark J. Seitz and Father Fabian Marquez, both of El Paso, Texas, lead prayers Sept. 26, 2019, for Antonio Basco, who lost his wife, Margie Reckard, during the Aug. 3 Walmart mass shooting in El Paso. Bishop Seitz and Father Marquez visited a memorial to the victims during a Sept. 23-27 pastoral encounter by U.S. bishops with migrants at the border. (CNS photo/Tyler Orsburn)

BALTIMORE (CNS) — Hours before the fall general assembly of the U.S. Conference of Catholic Bishops officially began in Baltimore, some fellow bishops congratulated Bishop Mark J. Seitz of El Paso, Texas, and others said to him in passing, “Great work you’re doing down there.”

Some of it referred to a recent letter he wrote detailing the pain of Mexican-American and immigrant communities in his diocese, where racism, targeted at Latino communities, bolted into the normally tranquil border city of El Paso Aug. 3, as a gunman set on attacking those populations went inside a Walmart with an assault weapon and managed to kill 22 people and injuring two dozen others.

In the wake of the tragedy, the Diocese of El Paso — priests, religious and laity — stepped in to help, but their shepherd, worried that as the days went by people wanted to put the incident behind, boldly decided to put it front and center again in the form of a powerful document on church teaching called a pastoral letter.

(See the full text of Bishop’s Seitz’s letter, “Night Will Be No More,” in English and Spanish.)

In it, Bishop Seitz forced a raw look at racism, including inside the church, and at the way words, including by government officials, coupled with a person’s embrace of white supremacy, contributed to the deadly event and profoundly wounded, in particular, El Paso’s Latino community.

“Although I myself am not of Latino origin, they’re my people,” Bishop Seitz told Catholic News Service in a Nov. 10 interview. “They’re my family. They’re my flock, if you will. They’re the people I’m called to serve and to guide and, in some way, to protect, and they’ve been assaulted. I saw their faces. I heard their pain.”

Those in his diocese with whom he spent time in the aftermath — even though they may have not been shot at or were family of those who were hurt — also are victims in some form, he said.

“I heard a woman in her 40s, who had grown up in El Paso, and she said to me, ‘You know, all my life growing up here, I felt like a full citizen of this country, but with these events, for the first time in my life, I feel like I have been made a target simply because of the color of my skin.’ And that was so painful to hear.”

He said he wanted the letter to be a “conversation starter” and also one that would explore the underlying causes of the shooting, “something that would lead to further dialogue, especially because the people in my diocese were still suffering from that event.”

The letter has opened the doors of conversation, he said, to ask “what has been your experience in the past? Have you experienced something that showed prejudice toward you, discrimination toward you because you are of Latino origin? And I’ve been surprised at the answers.”

Previously, he had heard examples of such discrimination from El Paso seminarians sent to study in other states about their treatment outside of the border city.

“We, in El Paso, don’t have a seminary, so we send them to other places. And very often there are places where there is not a Latino majority. And so we were surprised at the kind of things that came out of that,” he said, mentioning things that had been said to seminarians who were Latino.

The shooting brought to the forefront issues surrounding racism directed at Latinos, immigrants, and, in a general way, to anyone with brown skin, he said. A mass shooting of any type is horrible, and with the El Paso shooting Latinos joined Jewish, African American and Muslim victims targeted by supremacists.

“And now, in a particular way, it’s come home,” he said. “This white supremacist ideology, which is growing in our country, has drawn blood.”

So, it gave him pause to hear others wanting to seek distance from the incident in El Paso.

“We continue to have this trauma of this pain we’ve experienced,” he said. “There is a large portion of our community, however, and many of whom were significantly traumatized by it, but who are saying now in these last two to three months since the event took place that, ‘OK, we’ve grieved. We’ve been there. We’ve responded as a community and now let’s move on.'”

Though he said he understood what they were saying and why, he thought it was important to talk about it.

“It can’t simply be put under the rug as though this was just another passing experience where an individual was deranged, came and shot people,” he told CNS.

“This event, it was, in some ways,” he continued, “the tip of an iceberg that consists of a growing ideology that either is latently racist in their attitudes, especially toward people of Latino origin … a rhetoric that makes it seem acceptable to exclude a whole group of people, immigrants and, more broadly, people of Hispanic origin, simply because of their origin and this we cannot simply put under the carpet. We have to deal with that because it’s not going away.”

So, he wrote the letter, and it got unusual mainstream attention for a bishop’s pastoral document.

“The reaction outside of El Paso to my letter, that I have heard, has been overwhelmingly positive and embarrassingly so in a certain way because people have been so, a few, effusive in their praise,” he said. “I didn’t expect that. I expected this to be a little bit edgy, in a certain way, in dealing with these very difficult issues.”

But he said it was affirming to hear praise from Latinos, “people whom I have come to love so dearly, members of the Latino, Latina community in our country. It is so affirming to me.”

Even on Facebook, parishioners from the Diocese of El Paso praise the bishop and what he wrote.

“His letter to us was from within the depths of his ‘corazon’ (heart),” wrote Gloria Duran. “We love you.”

“I hope it will bring healing, certainly, but also will challenge this notion and make people more aware that language matters, that stereotypes matter, that people die if you’re not careful about the way that you speak, especially if you’re a leader.”

What’s in the letter is fully rooted in the Gospel, he said.

“This is something that arises from the teachings of Jesus Christ, about the dignity of every human person as a child of God and about the special respect that needs to be given to those who are among the poor, in one way or another, for those who are looked at as being, what Pope Francis would call, the periphery of society … those who are looked down upon, those considered ‘less than,’ like the Samaritan.”

He said for him it’s easy to speak out about it, as hard as it is, “because we know who is at our side.”

“And as I mentioned in the letter, in a beautiful Spanish poem, which concludes it, ‘they can only threaten us with the resurrection,’ which I just love because it says fear, it does not need to be in the equation. Jesus of course, makes this point so many times. Ultimately, we, as Catholic Christians, we know, that the resurrection wins.”

NEXT: Brooklyn bishop denies claim he abused child decades ago