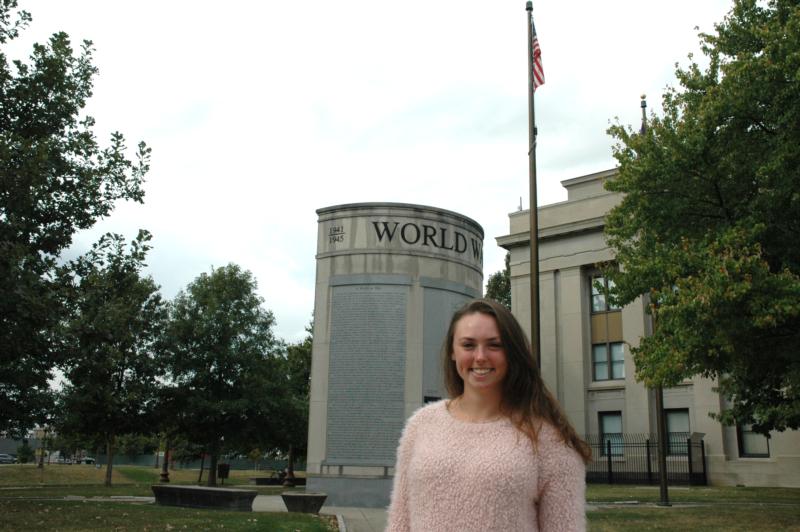 Standing near a World War II memorial in downtown Indianapolis, Sophia Egold knows the difference that veterans have made in her life and the life of the United States. In November 2013, Sophia was part of a school-wide letter-writing project at St. Barnabas School to recognize the World War II veterans of the 95th Bomb Group. Sophia drew the name of Frank Barbour, a Boston native who joined the Army Air Corps at the beginning of the war and became a decorated B-17 pilot by its end. (CNS photo/John Shaughnessy, The Criterion)

INDIANAPOLIS (CNS) — At 20, Sophia Egold is part of a generation that communicates almost exclusively by text, Instagram, Facebook and other forms of social media, yet she has learned that none of them compares to the power of an old-fashioned, rapidly fading alternative.

“There is nothing like getting a letter,” she said. “Getting a letter is so much more powerful than a text because it takes more time writing it down and putting it in a mailbox.”

A letter that touched Egold’s life in ways she never expected is one she wrote six years ago when she was an eighth grader at St. Barnabas School in Indianapolis. It was a letter of thanks to a World War II hero for his service to his country.

Another letter is one she recently received in the mail as part of a package she was stunned to get.

In November 2013, Sophia was part of a schoolwide, letter-writing project at St. Barnabas to recognize the World War II veterans of the 95th Bomb Group. Sophia drew the name of Frank Barbour, a Boston native who joined the Army Air Corps at the beginning of the war and became a decorated B-17 pilot by its end.

Her letter said in part: “Dear Mr. Barbour, I’ve researched a little about you, and I’ve come to find out that you were a co-pilot and have traveled to many places like Germany, France, Poland, Hungary and I’m sure other places. I wanted to tell you that I find that very interesting, even though I’m sure it was a tough period of time in your life.

“I live with my mom and dad, and my two little brothers named Jacob and James. I don’t know what I would do without them. I’m sure that when you were away, fighting for our country, it was a hard experience to be away from your friends, family and home … but I can respect the sacrifices you made to protect our country.

“I wanted to take a little time to thank you for the sacrifices you made all those years ago to give me the freedoms that I have today. I know that I take those freedoms for granted a lot, but as I’m sitting here writing to you, I realized that I really am grateful. … God bless you for your sacrifice.”

Egold received a response, and “the gist of it was thanking me for my letter,” she told The Criterion, newspaper of the Archdiocese of Indianapolis. “He said it meant a lot to him.”

Still, she didn’t know just how much it meant to him until she received a letter from Barbour’s wife, Janice, in early September of this year. Janice sent it to St. Barnabas School, hoping someone there could get the letter to Sophia.

“When I got a call from St. Barnabas in September, they said they had a package for me,” says Sophia, who is now a sophomore at the University of Dayton in Ohio. “It was a really great surprise.”

It also was bittersweet.

Janice Barbour shared the news that her husband “passed away on July 4 of 2019, just a few days before he would have celebrated his 97th birthday. He was so alert and intelligent. Everyone enjoyed talking to him about his life and the things he accomplished in the wars he fought.

“My husband fought in World War II, Korea and Vietnam, and received many medals for his courage and bravery. He was considered a hero.”

Her thoughts also focused on Sophia and the letter that she wrote six years ago, complimenting Sophia as “an amazing young girl to write a letter so full of thought and meaningfulness. It meant a lot to my husband when he received this letter. Of all the letters he received, he kept this one.”

Janice Barbour added that she chose to have Sophia’s letter read aloud at her husband’s memorial service Aug. 3.

“Everyone was so impressed by this sweet letter,” Janice noted.

In writing a response to Janice, Egold expressed her condolences, thanked her for reaching out “after all of these years” and told her it was “great honor to know her letter was read” at Frank’s memorial service. Egold added she has a lot of respect for Frank’s years of military service.

“I would have loved to be able to meet Mr. Barbour,” she wrote, “and thank him for his heroic acts in not just one war, but three. … I would not be where I am today without the men like Mr. Barbour giving me and everyone else in my life our freedoms.”

Frank Barbour is “still someone I can look up to,” Egold told The Criterion. “It makes me think of the great impact that veterans have on our country. They have made great sacrifices for us.”