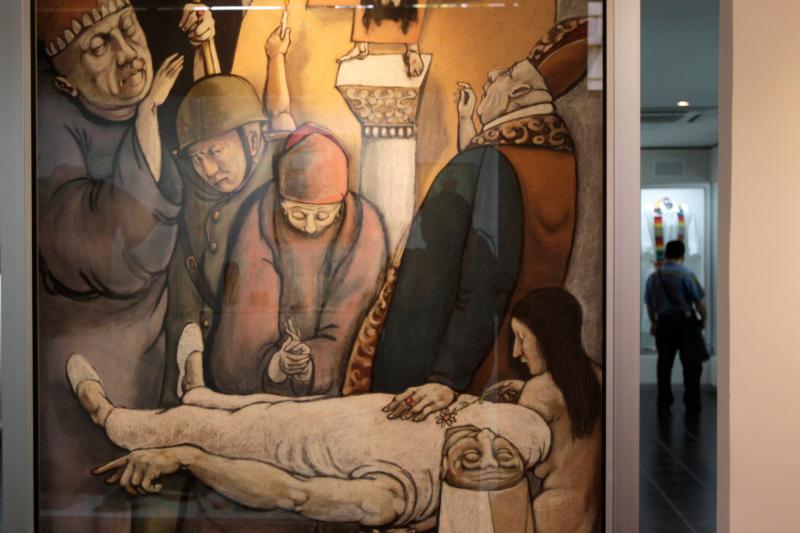 A painting is seen at the Museum of the Central American University in San Salvador, El Salvador, Nov. 16, 2009, which commemorates the six Jesuit priests who were killed during El Salvador’s 1980-92 civil war.  (CNS photo/Luis Galdamez, Reuters)

WASHINGTON (CNS) — The murdered Jesuits in El Salvador, whose legacy is being commemorated around the world Nov. 16, the 30th anniversary of their deaths, were known for their academic prowess.

But their legacy is much more important in the life of the church, in the way communities of faith relate to one another, said a Mercy sister who has studied the life of the Salvadoran martyrs.

At Central American University in San Salvador — popularly known as the UCA (pronounced oo-kah) — where they were murdered, they were trying to put into effect a new path, not just for the university, a center of society where formation of conscience can take place, but also for the church, said Mercy Sister Ana Maria Pineda, a theologian and professor at Santa Clara University in California.

They were using their gifts and talents and resources “to create a new kind of society, where there is fairness, there is justice, everyone has a place,” said Sister Pineda, in an Oct. 31 interview with Catholic News Service.

That was not the case in El Salvador when the Basque and Spanish Jesuits lived in the Central American country, the place where they lost their lives in 1989 because they spoke against the injustice they saw, the ocean of inequality they witnessed between the country’s rich and the poor, on a daily basis.

“They spoke of a new sense of being church, a new understanding of what it meant to be church,” said Sister Pineda.

That meant not just being a church focused on the sacraments but one where Christians worry about one another and also about society at large. They were trying to get some people to “think differently,” said Sister Pineda, and their writings and practices remain today a source of inspiration for those in the church’s social justice circles working toward that goal.

That’s why the lives of Jesuit Fathers Ignacio Ellacuria, Segundo Montes, Ignacio Martin Baro, Amando Lopez, Joaquin Lopez y Lopez and Juan Ramon Moreno matter and must be remembered, and not because of how they died, said Sister Pineda.

While El Salvador remains a country of inequality, some inroads have been made because of what the Jesuits tried to do there, and their work and thinking has extended beyond the country’s borders, Sister Pineda said. Their vision remains a work in progress, but it’s one that has church groups helping build what the Jesuits envisioned and hoped for, even outside of El Salvador, she said.

“It’s not achieved overnight. It’s a whole process. You can help some people think differently, you can have students involved in community efforts, you can call attention to the intellectual and academic world, not only in El Salvador but beyond, ” she said.

“We have to consider new ways of being ‘for each other’ and the responsibility that one society (has) for another,” she continued. “We don’t live and exist in isolation. We are responsible for our brothers and sisters. We can’t separate faith from acts of justice. They are part of the whole.”

Those were the teachings of the men who died along with their housekeeper, Elba Ramos, and her teen daughter Celina, whom Sister Pineda called “symbols” of the Salvadoran people the Jesuits were fighting for.

As thousands descend on El Salvador to mark the deaths of the priests and of the Salvadorans who died with them, there is much to learn, said Sister Pineda, and there is much unseen and impossible to measure about the effect and influence on those who come into contact with the story and witness of their Christian lives.

“People from all over the world come to these moments of commemoration and celebration and remembrances. We can’t discount what happens to those that are in attendance and what message they take back, what small or large changes occurred in them because they experienced this,” she said.

For Sister Pineda, who was born in El Salvador but left at age 2, witnessing the events and traveling to the country, even with all the horrors that have taken place there, there’s a sense of entering into “sacred ground” including for events that mark tragedies, such as what happened to the Jesuits, she said.

“There are so many sites, pilgrimage sites, that … because of how people gave their lives, or their lives were taken because they stood on behalf of goodness and kindness and justice and care for others, it’s like a pueblo de martires (a place of martyrs),” she said.

She said many places in El Salvador are constant reminders of the “price” some pay trying to bring about a change in societies that are unjust and violent. And it does not symbolize defeat, instead, there is much faith to be found there.

“It’s a place of great inspiration and a reminder of where I came from,” she said. “I feel connected to, to that land. You go the UCA (the university where the Jesuits where killed), their spirit is all over that campus.”