Minnesota high school prepares for beatification of one of its own 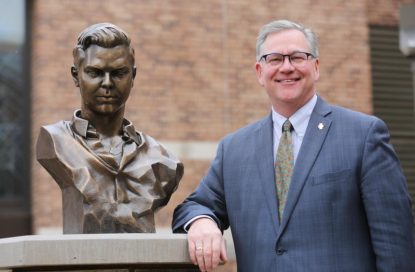 Frank Miley, president of Cretin-Derham Hall High School in St. Paul, Minn., stands next to a bronze bust of Brother James Miller that sits in the courtyard of the school. Brother Miller, who taught at the school from 1966-1971 and again from 1979-1980, was officially recognized by Pope Francis as a martyr last year, clearing the way for beatification. He will be beatified Dec. 7 in Guatemala. (CNS photo/Dave Hrbacek, Catholic Spirt)

ST. PAUL, Minn. (CNS) — A man who scrubbed toilets and shoveled sidewalks at Cretin-Derham Hall High School is on his way to becoming a saint, and the school is celebrating his beatification by elevating his presence on campus and connecting students to his legacy.

Christian Brother James Miller taught at then-Cretin High School in St. Paul from 1966 to 1971 and again from 1979 to 1980, teaching Spanish, founding the soccer team and serving as maintenance supervisor.

Brother Miller was martyred in 1982 — at age 37 — during the Guatemalan Civil War. Three hooded men found him on a ladder repairing a wall and shot him. Many assume he was killed because he fought to keep his students from being forced into the military.

Pope Francis officially recognized Brother James as a martyr last year, clearing the way for beatification. He will be beatified on Dec. 7 in Guatemala, a ceremony that four members of Cretin-Derham Hall will attend, including President Frank Miley.

Reminders of the late teacher pop up throughout the school. The chapel is being renamed in honor of “Blessed Brother James”; staff is working with the archdiocese to make the rededication official. The school commissioned a bronze statue of him that was recently installed in the courtyard, which is also being renamed after him.

Meanwhile, the original icon of Brother Miller painted by Nick Markell is displayed in the school’s History Walk alongside other noteworthy memorabilia. A reproduction hangs in the classroom where he taught.

The students’ education on Brother Miller is enhanced spiritually. Multiple times a day they participate in a call-and-response invocation that now includes, “Blessed Brother James Miller,” “pray for us.”

“He has a big footprint here,” Miley said, “and the beatification is making that footprint even bigger.”

The administrator said he could not hope for a more inspiring example to lift up to the students.

Brother Miller’s courage in the face of danger is particularly appealing to young men, who are more likely to engage in service opportunities that are challenging or feel risky, Miley said. “For young men, that sense of adventure is another element that Brother James embodies.”

Brother Miller was a farm boy from Stevens Point, Wisconsin, whose work ethic prodded him to quietly help across campus: mopping floors, cleaning furnaces and plumbing.

Students watched him lumber down the halls in his long black robe, tools strapped to his belt, and took to calling him “Brother Fixit.” No work was beneath him.

He lived simply, wearing the same overalls every week. He coached soccer and taught Spanish. He related to his students, maintaining high standards that were softened by his ready humor and belly laugh.

But the plight of Third World countries was no laughing matter. Brother Miller seized every opportunity to educate his students. They collected money for their mission schools, and Brother Miller spoke passionately about his dream of becoming a missionary.

He never took for granted the luxury of being an American and had no patience for what today are dubbed “first-world problems,” said Donny Geng, who taught at the school during the same time and is now retired. “He was tired of the American cavalier-ness about education. It’s an entitlement.”

“It was clear from the beginning that he was a champion of the poor and wanted desperately to serve down there,” said Christian Brother Pat Conway, a humanities professor at St. Mary’s University in Winona, who was a student when Brother Miller began teaching.

Brother Miller was alternately firm and flexible. Once, Brother Conway was given a detention for missing school. As punishment, he had to take down hockey boards after school. Brother Miller knew the boy had been hospitalized at the time and discretely informed the dean. A few minutes later, the dean called out: “Conway, go home.”

“It was that human side,” Brother Conway said. “He was very quiet about it.”

He likewise remained relatively quiet about the danger of his mission work but confided in close friends. Once, a round of machine gun had sent him for cover, Geng recalled. “He said, ‘I never knew I could pray so fervently as when under my bed.'”

To teach at a Christian Brother school in Guatemala was the fulfillment of a dream. He felt purposeful and needed.

Three days after his death, a crowd gathered at the Cathedral of St. Paul for his funeral Mass celebrated by then-Archbishop John Roach. “The beauty of the life of James Miller, and those who serve God’s poorest in that part of the world, is that they serve with faith and an absolute commitment to the belief that that’s where the Lord wants them,” the archbishop said.

Service to the neighbor in need is a charism of Christian brothers that Cretin-Derham Hall tries to instill in its students, pointing to Brother James as a poignant case study.

“We are really dedicated to keeping the notion of the needy right before our students,” Miley said, “and Jim would be part and parcel in this.” Food drives throughout the year are an obvious first step, but weaving service into the curriculum sets Cretin-Derham Hall apart, he said.

Every Thursday, seniors leave for a two-hour window to serve those in need. “A requirement of that is they must be in one-on-one contact with human beings,” Miley said. “We believe that if you’re going to embrace the poor, you need to know them. I don’t know of another school that has embedded that in the program.”