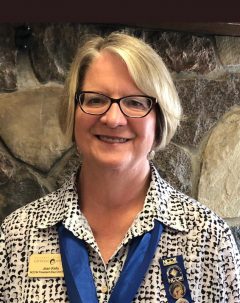 Jean Kelly, president of the National Council of Catholic Women, is pictured in an undated photo. NCCW was established in Washington by the U.S. bishops in 1920 and is planning for its centennial convention in the Virginia suburbs of the nation’s capital next summer. (CNS photo/NCCW)

WASHINGTON (CNS) — The National Council of Catholic Women was established in Washington by the U.S. bishops in 1920.

In a nod to those roots, the NCCW will hold its centennial convention in the Virginia suburbs of the nation’s capital next summer.

Planning for the 100th anniversary has been taking place for three years already, according to Jean Kelly, NCCW president.

“We’ve been getting ideas and getting thoughts together, and goals,” Kelly told Catholic News Service in a Nov. 7 telephone interview from her home in suburban Milwaukee. “We also had to get our hotel that far in advance.”

But before the convention convenes in Crystal City, Virginia, with about a thousand expected to attend, Kelly will represent the organization in Baltimore when the U.S. bishops gather for their fall general meeting Nov. 11-13. And, in what is believed to be a first, the NCCW will have time on their agenda for Kelly to speak.

She said she is allotting a majority of her time for a video touching on NCCW’s initiatives and projects. But “since the bishops started us a hundred years ago, we’ve got a lot to thank them for,” Kelly added.

One part of the NCCW convention will be a trip to Washington to the Basilica of the National Shrine of the Immaculate Conception for Mass. “We felt it was so important to be there,” Kelly told CNS. “And then our women can do a tour of their own. We started that ‘Mary’s Garden'” on the basilica grounds, she said. “They can spend a couple of hours walking around, looking at everything.”

Cardinal Timothy M. Dolan of New York is slated to celebrate the Mass and speak at the convention.

Given it will be NCCW’s centennial, “we’re going to ask women to dress in some of the different decades of clothing,” Kelly said. “We have a lot of old pictures,” and a history book is in the works, she added.

“We have an awards breakfast where people will be recognized for many different things,” she said, and during it will be “a little bit of a skit that goes with every 10 years (of the NCCW’s existence). And we’re going to ask the women to stand up for that decade.”

But, “because it’s a typical convention for us,” Kelly said, “it can’t be just one big party.”

Kelly said there are “many layers” of NCCW membership — about 2,500 affiliates of various types, with about two-thirds of those based in parishes. Getting a handle on just how many women belong is a priority, she added: “It’s really hard for us to put an exact number on it. We get (membership) checks from parishes, and we’ve recently started asking, ‘How many people does this involve?'”

NCCW is in a position of both looking back and looking ahead.

“Each year there are different projects and programs for our women to do,” Kelly said. “We kind of forget the wonderful things we’ve had in the past,” adding the organization’s website — www.nccw.org — can help address that.

Among reasons the organization was founded was to give Catholic women of the country “a common voice and an instrument for unified action in all matters affecting Catholic or national welfare,” according to a history of the organization on its website.

With a second century of service coming up, “we really want to build on what we have,” said Kelly, whose two-year term as president began in May. “My goal is that we go through all of our resources and update them, and encourage women to keep using them.”

NCCW also is “working at getting in some of the high schools and colleges, and getting the youths back into church,” she said, using a resource titled “Calling All Catholics.”

“We’ll have events, have speakers, have a day at their meetings where they talk about these things — about passing on your faith and to encourage families to encourage their own children to come to church,” Kelly added.

“Of course, so much of our stuff is founded on prayer, and we start with that.”