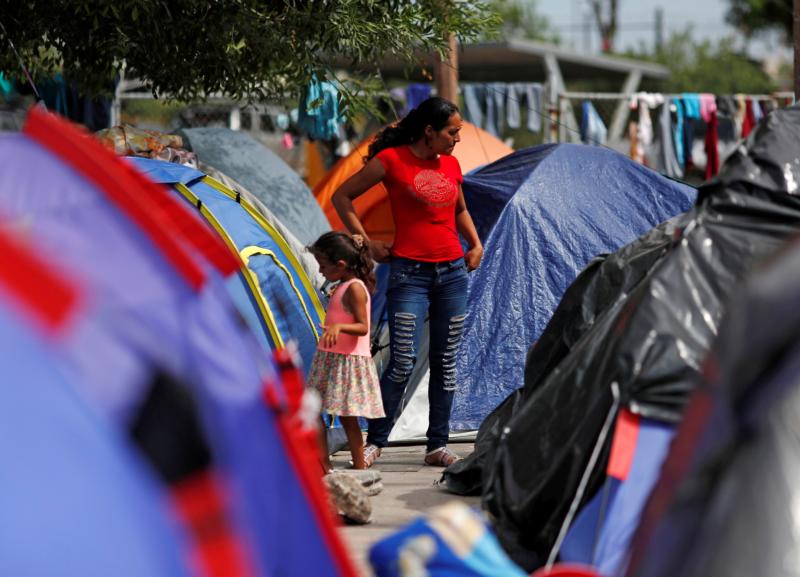 Central American migrants who were returned to Mexico from the U.S. under the Migrant Protection Protocols, are seen Sept. 14, 2019, outside their tent in Matamoros, Mexico, while waiting for their court hearing for asylum. Two Catholic leaders expressed concerned with the federal government’s new plan to send Central Americans who want asylum in the U.S. to Guatemala, Honduras and El Salvador where they would be required to apply for U.S. asylum while in one of those countries. (CNS photo//Henry Romero, Reuters)

WASHINGTON (CNS) — Two Catholic leaders expressed concerned with the federal government’s plan to send Central Americans who want asylum in the U.S. to Guatemala, Honduras and El Salvador where they would be required to apply for U.S. asylum while in one of those countries.

They called on the government to “preserve and uphold the sacredness and dignity of all human life” by not turning away from people who are facing a variety of threats in the region and are “in desperate need of help.”

The agreements require migrants traveling to the U.S. to apply for protections in one of the three countries they pass through first.

The bishop and the CRS official said vulnerable people seeking safety in the U.S. “should be welcomed and given the chance to access the protection that our laws provide.”

They said they feared the agreements “would leave many helpless people, including families and children, unable to attain safety and freedom from violence and persecution.”

“The governments of Guatemala, El Salvador and Honduras do not have the resources nor the capacity to safely accept, process and integrate asylees,” the statement said, noting that the Catholic Church in Guatemala has raised concern about the implementation of the agreements.

“Furthermore, these agreements do not address the root causes of forced migration and could further endanger the lives of people fleeing a region that continues to have some of the highest homicide rates in the world,” the statement said.

The leaders concluded their statement by saying the Gospel requires that society “always remember we are invited to embrace the foreigner and to take care of this human person. Let us move ourselves from a culture of indifference to a Christian culture of solidarity. We can and must do more.”

NEXT: Panelists say from day one, Pope Francis showed world he would be a pastor