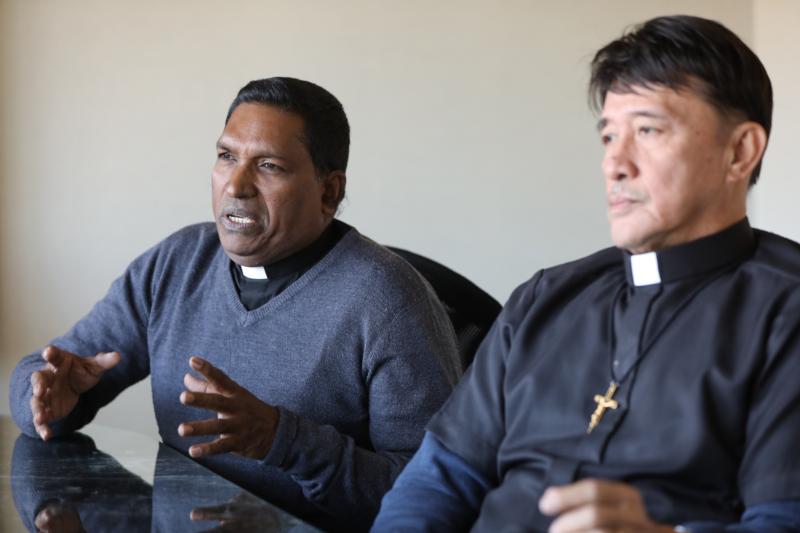 Franciscan Father Neville Fernando of Negombo, Sri Lanka, gestures during a Nov. 21, 2019, interview in Washington alongside Oblate Father Romeo Saniel, apostolic administrator of the Vicariate of Jolo, Philippines. Father Fernando was one of the first responders to arrive on the scene of the Easter Sunday bombing of St. Sebastian Church in Negombo. (CNS photo/Bob Roller)

WASHINGTON (CNS) — Two priests unexpectedly thrust into the middle of the aftermath of religious extremist violence in their countries are finding a new side to their ministry, one rooted in consolation, reconciliation and, most of all, rebuilding hope.

Franciscan Father Neville Fernando of Sri Lanka and Oblate Father Romeo Saniel of the Philippines have seen the worst side of humanity and told Catholic News Service during a visit to Washington Nov. 21 that they want to prevent the horror of death and destruction they experienced earlier this year from occurring again.

“It’s an important time of building peace and recognizing that freedom of religion should be respected,” said Father Saniel, apostolic administrator of the Vicariate of Jolo, a city in the southern Philippines where a pair of suicide bombers attacked the Cathedral of Our Lady of Mount Carmel Jan. 27.

For Father Fernando, who survived the Easter bombing of St. Sebastian Church in the fishing village of Negombo, collaboration among people of different faiths is vital in overcoming nationalism and religious extremism in Sri Lanka.

Catholics are a minority in both areas where the violence occurred. Both priests said that over the years, Catholics have maintained cordial and respectful relationships — with majority Muslims in the Philippines and Muslims, Buddhists and Hindus in Sri Lanka.

Father Saniel said several local leaders in the Bangsamoro Autonomous Region in Muslim Mindanao graduated from Catholic schools in the region and have had a long collaborative relationship with the Catholic Church, which he expects will strengthen efforts to achieve peace.

“Beyond the trauma healing, the solidarity with those who have died, we are now trying to work hard on strengthening interreligious dialogue so it will not become a religious war,” Father Saniel said.

Since the bombings, both priests said, it is more important than ever to address the roots of extremism: poverty, unemployment, lack of education and the inability of government to adequately respond to insurgencies that see violence as the best way to achieve their political or religious goals.

The clergymen were in the U.S. in collaboration with Aid to the Church in Need, which supports church building projects, development programs, seminarian and religious formation and other church needs worldwide. They joined a United Nations conference Nov. 20 to discuss their work in the devastated communities.

In Washington, they were to meet with U.S. Agency for International Development officials to seek support for their humanitarian efforts and the U.S. Committee on International Religious Freedom to discuss how the country can support minority religious communities.

Their visit occurred during Aid to the Church in Need’s weeklong Courage in Red campaign to call attention to Christian martyrs around the world. Under the effort, church leaders and elected officials were invited to bathe churches and public buildings in red light to mark the week.

The two priests also will participate in a vesper service to close the observance at the Basilica of the National Shrine of the Immaculate Conception in Washington Nov. 23. Archbishop Christophe Pierre, apostolic nuncio to the U.S., will preside.

Father Fernando, who was stunned by a concussion blast during the St. Sebastian bombing, said the newly elected government of Sri Lanka has pledged to continue the investigation into the Easter bombings at three churches and several hotels. The violence claimed more than 300 lives.

He credited Cardinal Malcolm Ranjith of Colombo for pushing elected officials for a full investigation and for taking steps to ensure that the church continues to minister to survivors of the dead.

“We are taking responsibility not to leave the people,” Father Fernando said.

In Negombo, the Franciscan community serving St. Sebastian Parish has established a healing center that provides counseling for victims and special programs for children whose parents or siblings died in the attack.

Father Saniel expressed appreciation to Philippine President Rodrigo Duterte for shoring up protection of parishes in Mindanao despite his history of strong criticisms of the Catholic Church.

Beyond the government response, Muslim partners contributed funds to help repair damage at the cathedral in Jolo so it could reopen quickly and offer Mass and the sacraments to the faithful, Father Saniel. And while repairs were being made, Muslims opened their mosques to the Catholic community for prayer, he added.

That support made an impression on Father Saniel.

“After we accompanied our Christians, we realized we were not isolated in our faith. So many Muslims reached out to us,” he said.

In conjunction with the Courage in Red campaign, ACN released its biennial report on Christian persecution. Covering the period of 2017-2019, the report assesses the treatment of Christians in 12 countries throughout Africa and Asia. It credited Iraq as the only country where conditions improved for Christians as thousands began returning to traditional homelands in the northern part of the country after they fled or were forcibly evicted by the Islamic State group.

However, conditions worsened for Christians in Burma, China, India, the Philippines, Sri Lanka and Central African Republic, according to ACN’s findings. In Pakistan, Egypt, Nigeria, Sudan and North Korea, conditions remain unchanged over the last two years, but continued to be especially difficult, the report said.

The report expressed concern for the presence of Christians in the Middle east, explaining that the migration of Christians, security crises, extreme poverty and slow recovery may doom some Christian communities from ever recovering. “In some towns and cities, the countdown to Christianity’s disappearance is ticking louder than ever,” it said.

The report acknowledged that the international community has shown “unprecedented concern” for persecution. However, it said, “there was mounting concern that the West has largely been ‘blind to this issue’ … and that initiatives by the international community have yet to bring demonstrable change for many of the Christians suffering persecution.”