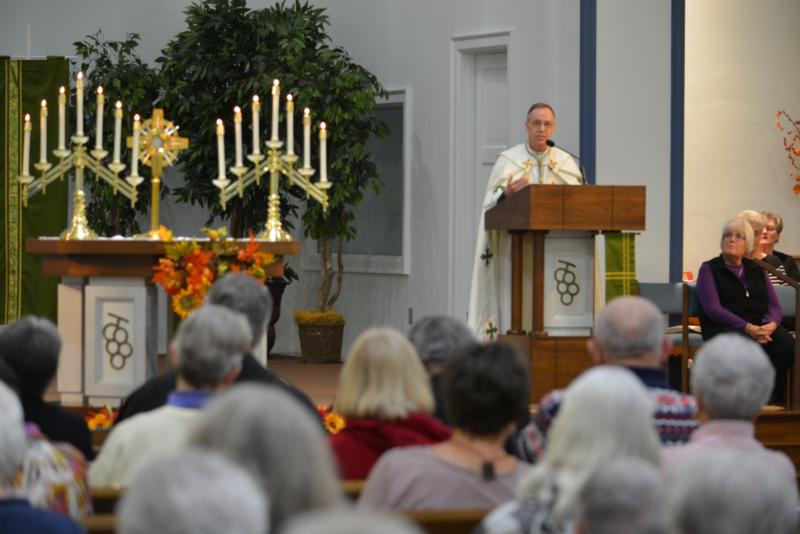 Indianapolis Archbishop Charles C. Thompson offers a reflection at Sacred Heart of Jesus Church in Terre Haute Nov. 5, 2019, during a prayer vigil for the federal prisoners scheduled for execution in December and January at the Federal Correctional Complex in Terre Haute. (CNS photo/Natalie Hoefer, The Criterion)

TERRE HAUTE, Ind. (CNS) — Nearly 100 people were bathed in light as they gathered for a prayer vigil at Sacred Heart of Jesus Church in Terre Haute, not far from the Federal Correctional Complex.

Despite the lights and bright glow, the tone was heavy and somber. They were gathered to pray for the federal death-row inmates and all those affected by their pending executions scheduled for December and January at the prison.

“It’s so important that we pray before Christ in the Blessed Sacrament tonight,” he said in a reflection he offered as part of the Nov. 5 service. “What needs to remain constant is keeping Christ at the center, so that we are always aware of our dignity and the dignity of others, whether it be perpetrators of horrible crimes, or their victims, or their families, or those who work in correctional facilities.”

Christ must remain the constant, but church doctrine can develop, the archbishop noted. He explained that when Pope Francis announced in August 2018 that the death penalty was no longer admissible, it wasn’t a decision the pontiff “just pulled out of the air.”

“It was something that had been developing through the papacy of St. John Paul II and Pope Emeritus Benedict XVI,” Archbishop Thompson said. “And this is a doctrine that developed along with the development of society.”

Such advances in the penal system have led to the situation today, he said, of there no longer being “the threat that there was 20 or 30 years ago in (inmates) escaping.”

“And so our doctrine develops along with our society — and that’s frustrating for some,” Archbishop Thompson noted. “Some of us like very black and white ways of living.”

So it was in the time of Christ, he said. There were clear rules with no exceptions: a woman caught committing adultery was to be stoned — no exceptions. A tax collector, like Zacchaeus, was a traitor and therefore a sinner — no exceptions.

To give a more current example, Archbishop Thompson described how in the span of two weeks, he gave viaticum — a term used for the Eucharist given to a dying person during their final rites — to both his elderly aunt and to a Catholic man slated for execution.

“In the time of Jesus, when Romans buried someone, they put a coin in their mouth,” he explained. “The coin was meant to pay the toll to the next life. Viaticum for Christians is the way of saying Jesus paid the price. He’s paid our toll from this life to the next.

The sermon was followed by prayers of petition for families of all those facing execution; for civic leaders to commit to respecting every human life from conception to natural death and to ending the use of the death penalty; and for those who work in the prison system.

As for the five men facing execution, they were prayed for by name, including their current execution date: Daniel Lewis Lee, Dec. 9; Wesley Ira Purkey, Dec. 13; Alfred Bourgeois, Jan. 13, 2020; Dustin Lee Honken, Jan. 15, 2020; and Lezmond Mitchell, whose execution date has been “stayed,” or delayed.

After the vigil in an interview with The Criterion, newspaper of the Indianapolis Archdiocese, Archbishop Thompson shared more about problems with the death penalty.

“The poor don’t have the means to defend themselves (legally), so they’re more likely to end up on death row,” he said. “And we know there have been instances where (people) have been found guilty and found later to be innocent, sometimes after they’d already been executed.

“And we also know that the carrying out of the execution doesn’t go smoothly. It tortures not just the person, but everyone who’s there to witness it.”

He also spoke personally about his hourlong visit recently with the Catholic inmate scheduled for execution, a visit the man requested.

“Doors closing and opening, keys rattling and all the security — there’s just a heaviness to it all,” he described.

The convicted man was received into full communion with the Catholic Church about eight years ago, “a credit to the Sister of Providence who visited with him,” the archbishop said.

With St. Mary-of-the-Woods, the order’s motherhouse, just west of Terre Haute, several of the Sisters of Providence are involved in prison ministry at the federal correctional facility.

“I was impressed with this man,” Archbishop Thompson said. He described him as “very intelligent” with “a good sense of Scripture and theology. “And yet, what he was convicted of was a horrible crime. … It’s a lot of mixed emotions,” he admitted.

Sacred Heart parish life coordinator Barbara Black admits that within the parish, reactions to the upcoming executions have been mixed.

“Some think they should not do capital punishment,” she said. “But those who’ve worked in the prison system are for it. They know what these prisoners have done. … You kind of understand where they’re coming from, but the bottom line is (that) every life is sacred.”

Black helped organize the prayer vigil with Deacon Steven Gretencord, who is assigned to the parish. Prison ministry is among his several ministries at Sacred Heart.

When asked about the men scheduled for execution, he explained he only knew the one who is Catholic because “in the federal system, you only minister to people who have declared (your) faith tradition.”

The man is “resigned to his fate,” Deacon Gretencord said. “He is far more concerned about his family than he is about himself. He’s approaching it very prayerfully. He’s very calm at this point. … He was very touched that the archbishop would take time out of his schedule to visit him.”

Deacon Gretencord noted that the prayers of the people of the archdiocese, as well as those of others from around the country who oppose the death penalty, are “a powerful, powerful source of inspiration and hope” for the convicted Catholic man.

NEXT: Wenski: Being pro-immigrant is ‘living’ Christ’s call to welcome stranger