What influence does religion have on Americans’ lives? 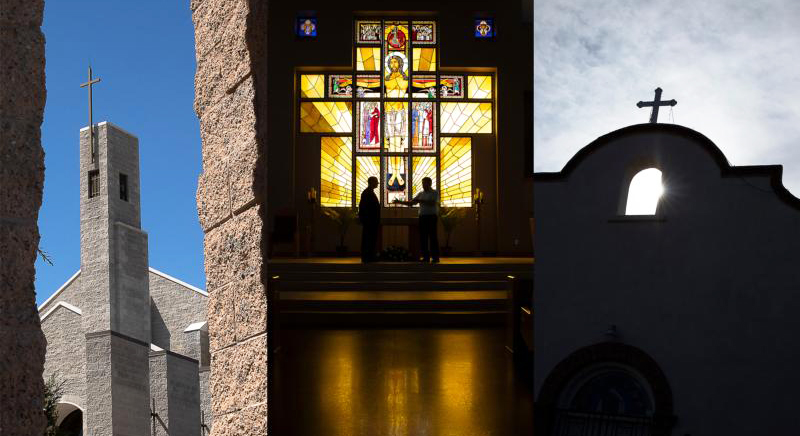 Three churches in the Diocese of El Paso, Texas, are seen in this composite photo. They are St. Mark Church, St. Francis of Assisi Church and Santa Teresa Church. (CNS illustration; photos by Tyler Orsburn)

WASHINGTON (CNS) — A new Pew Research Center survey issued Nov. 15 gauges the influence religion has on Americans’ lives and the hold Catholicism and other Christian religions has on their adherents.

“Just 8% of Catholics say they are very close with their clergy, a much lower share than in any other major U.S. Christian group analyzed,” the study said.

Is this because there are fewer clergy per Catholic than the ratio in other Christian denominations?

“That’s a really interesting hypothesis,” said Greg Smith, associate director of research at Pew. “We don’t have data that speaks directly to it, but it is data we could collect. The way would be to ask them how big is their congregation and how many clergy there are at their congregation. That would shed light on the hypothesis. It’s a hypothesis I’d love to test.”

Of Catholics polled by Pew, 62% say churches and religious organizations strengthen morality in society, 7% say it weakens it, while 30% say it doesn’t make much difference. Other stripes of Christianity all registered at least 60% in the “strengthen” category.

Among Catholics, 59% say religion mostly brings people together — they tied with mainline Protestants for lowest number among Christians with this view — while 10% say it mostly pushes people apart, and 28% say it does neither.

Sixty-three percent of Catholics, the lowest percentage of Christians, say religion does more good than harm, while 9% say it does more harm than good, and 27% say it doesn’t make much difference.

Is religion losing influence in American life? Among Catholics, 78% said yes; of those, 62% said it’s a bad thing, 8% said it’s a good thing, and 18% said either it doesn’t make a difference or gave no answer.

On the other hand, 20% of Catholics say religion is gaining in American life; 4% say that’s a bad thing, 10% say that’s a good thing, and 5% said it made no difference or had no answer.

At 62%, Catholics polled second highest among Christians in saying churches should keep out of political matters, although 37% said churches should express their views on day-to-day social and political questions.

When Catholics who go to church at least a few times each year were asked who has “high” or “very high” ethical standards, the parish priest won out with 87%. Pope Francis came in second at 83%, the local bishop followed at 79%, religious leaders in general were next at 77%, while the U.S. bishops collectively trailed at 69%.

Smith noted how, the less accessible the religious leader, the less likely they were to be trusted. The exception he said, was Pope Francis, who ranked “on a par” with the parish priest.

As a group, though, they fared better than what all Americans surveyed thought about how much they trusted certain professions in U.S. society: medical doctors, 87%; police, 70%; religious leaders, 65%; journalists, 45%; lawyers, 44%; and elected officials. 26%.

This is in line with a survey released by Pew this summer, according to Claire Gecewicz, the lead researcher on this poll.

In another part of the 57-page study, Pew said that “Catholics are less likely than all the other major Christian groups to have a lot of confidence in their clergy to give advice on almost all of the religious and personal topics asked about in the survey”: growing close to God, interpretation of Scripture, marriage and relationships, parenting, anxiety or depression, and personal finances.

Catholics again scored lower than any other Christian subset in being “very comfortable” going to their clergy to talk about: doubts about religion, 37%; marriage and relationship problems, 24%; parenting problems, 17%; problems with anxiety and depression, 15%; and financial problems, 7%.

Their level of trust in Catholic clergy on hot-button issues also ranked low:

— Climate change: 8% a lot, 38% some — again, the lowest percentage among Christian groups.

Their overall satisfaction level with sermons also was the lowest at 83%, and those “very satisfied” came in at 32%. They scored highest at being “somewhat satisfied,” 52%.

A majority of Catholics, 59%, were unsure of the political leanings of their clergy. Twenty-five percent said they were “a mix of both” Democrats and Republicans, and 7% each said their priest was either a Democrat or a Republican. In an aside, only 4% of evangelicals polled by Pew said their clergy were Democrats.

NEXT: Nearly 40 U.S. dioceses sign up to participate in #GivingTuesday Dec. 3