High school football league championships have been decided, but now there is a little something called districts and state tournament that warrants attention.

“It’s always exciting to be a part of playoff football,” said Archbishop Wood senior second-team All-Catholic strong safety/linebacker Ryan DiVergilis. “Any time you have a chance to go win a state championship, it makes the season so much more exciting even after playing a lot of games.”

Wood’s every facet was firing in a 44-15, PIAA Class 5A Catholic League championship win over Archbishop Ryan, moving the Vikings to the District 12 title match versus Martin Luther King at 1 p.m. Nov. 16 at Northeast High School.

“That win was important because it was our first playoff game and if we lost, our season would’ve been over,” said DiVergilis. “This week, we are just focused on winning the week and going 1-0. We just want to come out strong.” 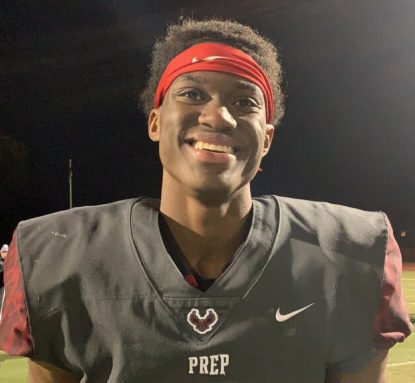 St. Joseph’s Prep opened up a 31-0 lead in the first quarter and coasted past La Salle, 52-7, to win the PIAA Class 6A Catholic League title. At 6 p.m. on Nov. 16, the Hawks will square off against Northeast High School (also at the school) for the District 12 championship.

Junior quarterback Kyle McCord fired five touchdowns in the first half, four of them hauled in by classmate Marvin Harrison. In two years, the pair will be college roommates at Ohio State University.

Midway through the week, both players found out they were first-team All-Catholics, with McCord being named the Catholic League Most Valuable Player for the second straight season — the first-ever non-senior to achieve such an honor.

Junior Kyle Lazer completed four passes, but three of them went for touchdowns in Bonner-Prendergast’s 35-20, Class 4A Catholic League championship win over Archbishop Carroll, pitting the Friars against Imhotep for the District 12 title at 1 p.m. on Nov. 16.

In winning their seventh straight game to improve to 9-1 overall, the Friars received two touchdowns from junior Nasim Rhodes-Nelson and 108 yards on 22 carries from sophomore Mason Peterson.

“The win was huge,” said B-P senior James Welde, a two-time, second-team All-Catholic receiver. “We thought we were better, and we think we showed that. We think we have a chance this week as well, and we are confident that if we do what we do best, we can win.”

Bishop McDevitt’s torrid defense held West Catholic to fewer than 200 yards of total offense, leading the Lancers to a 9-8, Division 11/12 sub-regional victory and a Nov. 15 meeting against Dunmore in the PIAA Class 2A state tournament.

In the Class 4A District 1 final, Bishop Shanahan pounded Upper Moreland, 35-0, for their first-ever title. The Eagles will meet Jersey Shore (Pa.) in the first round of the PIAA Class 4A state tournament on Nov. 15.

Shanahan picked the perfect time to perform at its optimal level. A three-game winning streak, which includes a 56-24 victory against District 12 top seed Pottsgrove, has spawned a scoring margin of 126 to 31.

Against Upper Moreland, sophomore dual-threat quarterback Cooper Jordan increased his season numbers to 1,242 passing yards and 13 touchdowns against only four interceptions. He has also accrued 564 yards and nine touchdowns on the ground.

In a seesaw contest that offered eight touchdowns — yet none scored by the same team consecutively — Pope John Paul II trailed by 22-21 inside the final two minutes. Facing a fourth and 10, senior quarterback Kamal Gray found junior Justin Kormos in the middle of the field for a 43-yard touchdown with 1:32 remaining in regulation to garner a 27-22 lead. Following his 35th TD toss of the season, Gray threw a two-point conversion pass to senior Stephen Skarbek, upping the lead to 29-22.

The Saints (11-1), who captured this year’s Catholic League Blue Division crown, responded with a touchdown to trim their deficit to 29-28. A two-point conversion attempt by first-team running back All-Catholic senior Tysheem Johnson (touchdown pass, touchdown run, punt-return touchdown) was thwarted inches from the goal line.