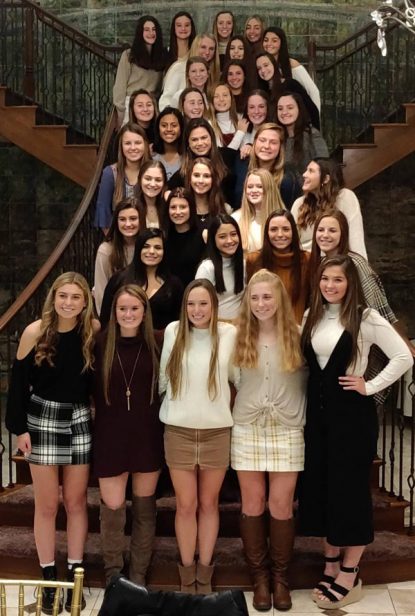 When a team wins something as prestigious as a state championship, it takes the proverbial village to make it happen.

“It’s just amazing how much this all came together,” said second-year coach Bree Benedict. “I’m just extremely proud of all our players. I know I’m going to miss our seniors so much. They’re a special group.”

When the season began, the Crusaders were defending last year’s Catholic League crown – the first in school history. The competition, as is always the case in Catholic League soccer, was formidable.

After a third-place finish during the regular season, the Crusaders eventually lost to Archbishop Wood, 2-0, in the playoff semifinals. They qualified for the Class 2A District final, where they overwhelmed Masterman, 5-0.

In the first round of states, an overtime battle with St. Basil’s Academy necessitated a 5-3 advantage in penalty kicks to advance to the quarterfinals (2-1 win over ELCO) and then, for the first time in program history, the semifinals (3-2 win over Lake-Lehman).

In the state final, hundreds of Lansdale Catholic faithful that packed seven buses for the 97-mile trek to Hershey watched the Crusaders turn chocolate into gold.

“Playing in the Catholic League against bigger schools definitely gives us an advantage once we get to districts and states,” said Benedict. “I think the biggest thing it offers us is a level of physicality that defined how we played through states.

“Ryan and Wood both made it to the state semifinals in AAA this year, so the strength of the league has been climbing year after year! Our results this year compared to last year really show the growth – where we won games by five and six goals last year, they were only by one or two goals this year.”

It was appropriate that, at the seven-minute mark of the first half, first-team All-Catholic senior Kellie Gillen scored the championship winner, her 16th goal of the season and 30th of her career. The hustle of senior Taylor Connelly, whose goal with 10 minutes left in the semifinal against Lake Lehman propelled the Crusaders into the final, set up Gillen for a point-blank shot.

“This season, we had a great mix of underclassmen who played a huge part,” said Gillen. “It was probably the strongest mix of freshman, sophomores, and juniors in the Catholic League that got quality playing time and contributed in each game, especially in the playoffs.

“They’re a huge part of our legacy and helps set the bar even higher for what to expect from Lansdale Catholic girls’ soccer in the coming years. There is great talent and future leaders among them, so they should be able to build on the legacy just like we were able to build on what the 2018 seniors left for us.”

“Julia played the entire post season pretty injured, but it didn’t matter,” said Benedict. “She made her presence known over and over again to opposing forwards with last-minute tackles and long clears. Danielle was just a beast all year and was our rock. She was our most physical player and there was never a tackle she shied away from.

“Lauren who was a phenomenal midfielder and stepped up big in the playoffs. She was a great dribbler and connected great passes. She also tied the game against Lake-Lehmann, 2-2, which set Taylor (Connelly) up for the winner to send us to Hershey.”

“To have that many kids, faculty, and family members at the game supporting us, we realized we were not only playing for ourselves anymore, but we were playing for our school community as well,” said Mehlmann. “Since bringing home the title, the whole LC community has grown closer together.

“I walk through the hallways receiving congratulations from teachers I have never had or fellow classmates I barely know. Not many can say they are ending their soccer careers as a state champion, but I am, and I am forever grateful to be part of this close-knit group of girls who helped me be able to say that. It truly is a dream come true.”

“It’s still crazy to think we won the whole thing,” said Boccella. “I remember the second half of the game being played mainly in our half and how nerve-racking it was. Every player defended with everything they had to get the ball away from our goal. Our job was to clear it out and finish the game.

“With a few minutes left, our coach put in (freshman) Megan Steinbach, and she really changed the game for us. Once she got in, I remember a sense of relief as she dribbled all the way to the other side of the field and kept the ball down there.

“Overall, every single one of our players played with her whole heart and left everything out on the field for our last game together.”

That’s what state champions do.