Whether or not they eventually compete at a high school or college level, the varsity field hockey team of St. Katharine of Siena School in Wayne will always smile when reminiscing about this past season.

“Winning this might as well have been winning the NCAA,” said coach Jane Dwyer. “They were so happy.”

Dwyer has been coaching for 13 seasons in a variety of capacities, usually dictated by the level at which each of her four daughters were competing. She’s been head coach of both the varsity (seventh and eighth grades) and junior varsity (fifth and sixth) and has served as an assistant.

The 2013 team came close to winning the CYO title, losing in the finals to St. Patrick, Malvern. This year’s squad, however, was different than any other. Sometimes needing to juggle a no-cut roster that swells into 30-plus members, St. Katharine had 18 players on varsity this fall, albeit allowing significant playing time throughout the regular season, particularly in tournaments.

“We had four lines, and they were all very, very good,” said Dwyer, a former lacrosse player at Villanova University. “At goalie, defense, midfield, forward … we were so lucky to have strength at every position. The best part was that the girls all knew what their role was.”

St. Katharine’s 2019 final resume was stunning. With a scoreless tie against St. Pius X of Broomall the only blemish, the team finished 11-0-1 in the regular season and seized the Region 32 trophy with two wins. In the CYO tourney, they defeated West Chester’s SS. Peter and Paul, 5-0, then blanked West Chester’s St. Agnes, 3-0.

On the first weekend of the season, they reached the final of the Notre Dame Academy tourney before losing to Colman-Neumann.

“We had a great group of players and dedicated coaches,” said Dwyer, referring to assistants Stacy Marchese and Msgr. Bonner graduate Jim Sharkey. “They were fun to watch, and they were a joy to coach.”

“The girls have always played as a team,” said Marchese. “They supported each other on and off the field, and because they played well together, they continued to win games. I couldn’t have asked to coach a nicer group of girls.”

Added Sharkey: “I knew this group was special, the most fun I have had coaching any sport, any level. The girls were great competitors and even better teammates.”

Late last week, after they finished making casseroles as part of a service project that would benefit Philadelphia’s Mercy Hospice (operated by archdiocesan Catholic Social Services), St. Katharine’s players received white sweatshirts to commemorate their special accomplishment. They then gathered around the championship trophy for a team photo.

Embracing and smiling broadly, it was one final opportunity for a talented, determined field hockey team to provide yet another memory that will last a lifetime. 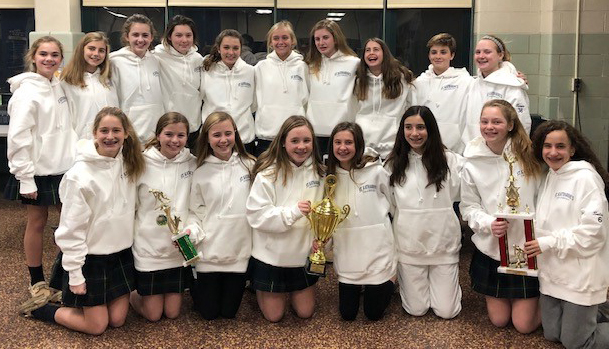 The St. Katharine of Siena, Wayne field hockey team is as proud of their service project to aid Mercy Hospice as their CYO championship trophy, with which they pose.

NEXT: Pressed into service, a junior leads Prep to state football title