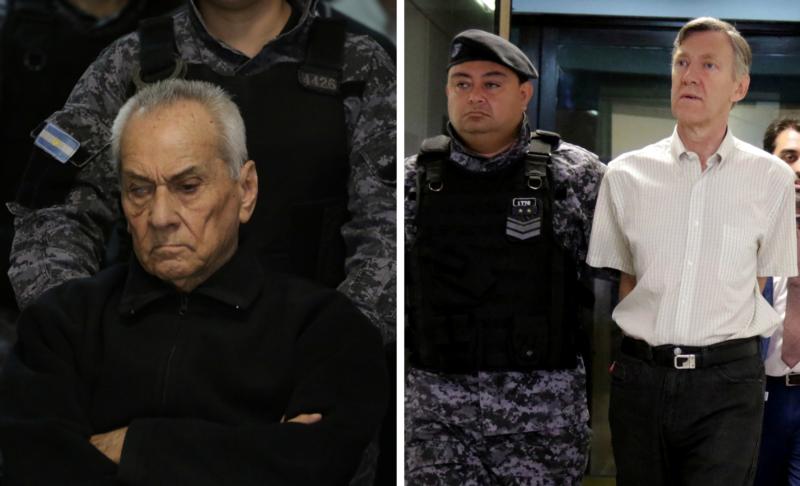 In this composite photo, Italian Father Nicola Corradi, left, and Argentine Father Horacio Corbacho, are escorted into a courtroom Nov. 25, 2019, in Mendoza, Argentina. They were sentenced to more than 40 years in prison for abusing children at a school for the deaf. (CNS illustration/photos by Maximiliano Rios, Reuters)

MEXICO CITY (CNS) — An Argentine court has convicted a pair of priests of sexual abuse on charges of corrupting minors in a case involving crimes committed against 10 children in the care of a Catholic school for the deaf.

The court in the province of Mendoza sentenced Fathers Nicola Corradi, 83, an Italian national and director of the Antonio Provolo Institute for Deaf and Hearing Impaired Children, and Horacio Corbacho, 59, to sentences of 42 and 45 years in prison respectively.

A gardener at the school, Armando Gomez Bravo, also was convicted and sentenced to 18 years in prison. The sentences were handed down Nov. 25.

The Provolo case scandalized Argentina, home of Pope Francis, as the details emerged of crimes being committed against children living and studying in the institution in Lujan de Cuyo, a community of vineyards in the foothills of the Andes Mountains.

Father Corradi was accused of abusing children in at the Provolo institution in Verona, Italy, but was transferred to one its schools in La Plata, Argentina, where he was accused of subsequently preying upon deaf children, and then Mendoza.

Victims testified to being abused at the now-closed school between 2005 and 2016, according to local press reports.

Church officials first learned of accusations of sexual abuse at the school in 2014, but failed to take action until 2017, according to an investigation by The Washington Post.

The Archdiocese of Mendoza said in a statement: “As a church, we want to once again transmit our solidarity and closeness to the victims and their families, who have … suffered the most aberrant treatment. What these persons have related has appalled all of Mendoza society.”

The statement continued, “Together with society we feel challenged to continue working so these situations never repeat themselves. The pain of the victims and their families is also our pain. Hence, we urgently reaffirm our commitment to the prevention, transparency, truth and justice to guarantee the protection of minors and adults in vulnerable situations.”

The Provolo case once again highlighted perceptions of inaction in Argentina on cases of sexual abuse committed by clergy.

“The subject of sexual abuse is taboo for the Catholic Church” in Argentina, said Jose Maria Poirier, editor of the Catholic magazine Criterio in Buenos Aires. “They don’t know how to handle it.”

Meanwhile, Bishop Gustavo Zanchetta, who has been residing at the same Vatican guesthouse as Pope Francis, was expected to travel back to the northern Argentine province of Salta and present himself in court prior to a Nov. 28 deadline to do so.

Bishop Zanchetta, formly head of the Diocese of Oran, has been accused of “aggravated continuous sexual abuse” of two former seminarians, along with defrauding the government. Through a statement from his canon lawyer, Bishop Zanchetta has denied the charges, but is cooperating with judicial authorities.