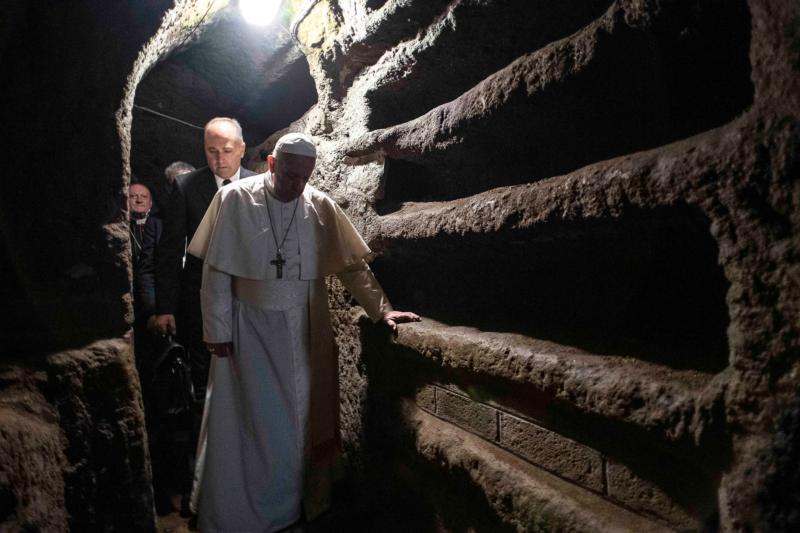 Pope Francis walks through the Catacombs of Priscilla where he celebrated Mass in Rome Nov. 2, 2019, the feast of All Souls. (CNS photo/Vatican Media)

ROME (CNS) — In what he said was his first visit to the catacombs, Pope Francis celebrated Mass for the feast of All Souls with special words of remembrance for Catholics who still today must worship in secret.

The website of the Catacombs of Priscilla, used from the second to the fifth centuries, says, “because of the great number of martyrs buried within it, it was called ‘regina catacumbarum’ — the queen of the catacombs.”

In his homily at Mass Nov. 2 in the catacombs’ small chapel, Pope Francis said, “This is the first time in my life that I’ve entered a catacomb.”

Celebrating Mass in the underground burial chamber, Pope Francis said he naturally thought “of the life of those people who had to hide, who had this culture of burying their dead and celebrating the Eucharist inside here.”

“It was an ugly moment in history, but it has not been overcome,” the pope said. There are “many catacombs in other countries where people even have to pretend they are having a party or a birthday in order to celebrate the Eucharist because it is banned.”

“Still today Christians are persecuted — even more than in the first centuries,” he said.

Much of the pope’s homily was focused on the reading of the Beatitudes from St. Matthew’s Gospel.

The identity of the Christians who gathered at the Catacombs of Priscilla “to celebrate the Eucharist and praise the Lord is the same as our brothers and sisters in many, many countries where being a Christian is a crime, it’s forbidden, they have no rights.”

That identity, the pope said, is spelled out in the Beatitudes: those who are poor in spirit, who mourn, who are meek, who hunger for righteousness, who are persecuted, who work for justice and peace.

“The Christian’s identity card is this: the Beatitudes,” the pope said. “There is no other.”

Belonging to some Catholic organization or movement is good, he said, but that does not come close to guaranteeing one is a Christian like the Beatitudes do.

“Your identity is this,” the pope said, pointing to the open Book of the Gospels. “If you don’t have this, belonging to a movement or something else is useless.”

The other Gospel passage that clearly states the essentials for measuring a Christian life, he said, is Matthew 25. In that passage Jesus says that when one gives food to the hungry, welcomes a stranger, feeds the naked, cares for the sick and visits prisoners they do the same for him.

With these two passages from the Gospel, the pope said, people demonstrate they are Christians. “Without this, there is no identity, there’s the fiction of being Christians,” but it is simply for show.

The faith of persecuted Christians and martyrs, he said, makes clear that Christians find their place, their security and their salvation only in the Lord’s hands.

The risen Jesus “wanted to keep his wounds to show the Father and intercede for us,” he said. “In the hands of God — that’s where we are secure, whatever happens, even the cross.”

“Today we can ask ourselves, ‘Where do I feel safest?’ In the hands of God or with other things, with things we ‘rent,’ but which will crumble in the end?”

Christians who lived according to the Beatitudes and cared for their brothers and sisters “lived and will live in God’s hands,” Pope Francis said.

NEXT: Catholic universities must educate minds and hearts, pope says