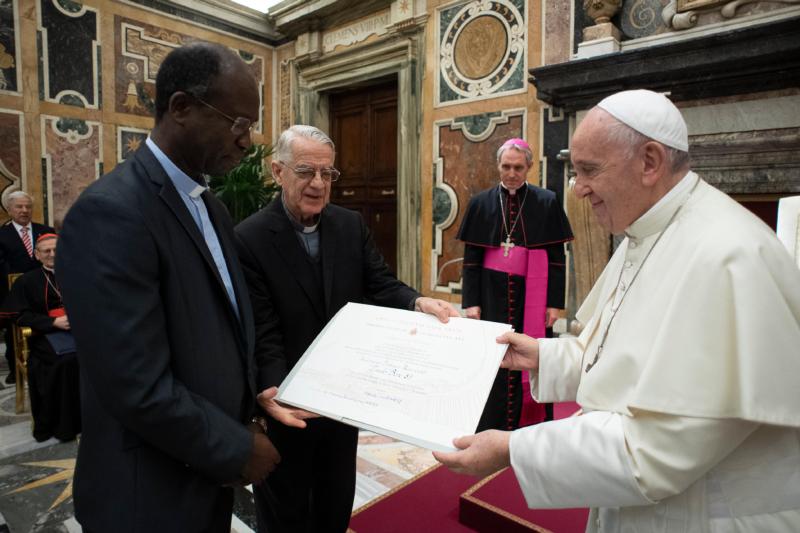 VATICAN CITY (CNS) — Giving the Ratzinger prize to a philosopher from Canada and a Scripture scholar from Burkina Faso, Pope Francis said they demonstrate that “in the variety of cultures, diverse across time and space, one can and should always seek the way to God and the encounter with Christ.”

Pope Francis presented the awards Nov. 9 to Charles Taylor, a philosopher who has focused much of his work on secularism, and to Jesuit Father Paul Bere, who is known particularly for his contributions to developing an African theology.

The prize winners were chosen by the Joseph Ratzinger-Benedict XVI Foundation, which was established in 2010 to support theological research and to promote studies on the theology and teaching of the retired pope.

Pope Francis used the prize presentation ceremony to express his “esteem and affection for my predecessor” and to thank him for “his teaching and for his exemplary service to the church, demonstrated by his reflections, his thought and study, his listening, dialogue and prayer.”

The retired pope’s aim as a theologian and pastor, he said, “was that we might consciously retain a lively faith despite the changing times and situations and that believers could give an account of their faith in a language that can be understood by their contemporaries, entering into dialogue with them, together seeking pathways of authentic encounter with God in our time.”

As a professor and pope, he “never closed himself off in a disembodied culture of pure concepts but gave us the example of seeking truth where reason and faith, intelligence and spirituality are constantly integrated,” Pope Francis said.

Taylor, the pope said, has looked at the cultural phenomenon of secularization with a “breadth of vision” few others have achieved. “We are indebted to him for the profound manner in which he has treated the problem, carefully analyzing the development of Western culture, the movements of the human mind and heart over time, identifying the characteristics of modernity in their complex relationships, in their shadows and lights.”

Taylor’s work “allows us to deal with Western secularization in a way that is neither superficial nor given to fatalistic discouragement,” Pope Francis said. “This is needed not only for a reflection on contemporary culture, but also for an in-depth dialogue and discernment in order to adopt the spiritual attitudes suitable for living, witnessing, expressing and proclaiming the faith in our time.”

He said Father Bere has worked for a “true African inculturation of the Christian message” by, for example, “his work on the interpretation of Old Testament texts in a context of oral culture, thus bringing to fruition the experience of African culture.”

“In the first centuries of Christianity, northern Africa gave the church great figures — Tertullian, Cyprian, Augustine — but the spread of Islam followed by centuries of colonialism prevented a true African inculturation of the Christian message until the second half of the last century,” Pope Francis said.

He thanked Father Bere and other African scholars for their commitment to inculturating the faith in Africa.