If church does not evangelize, it will decay, pope says 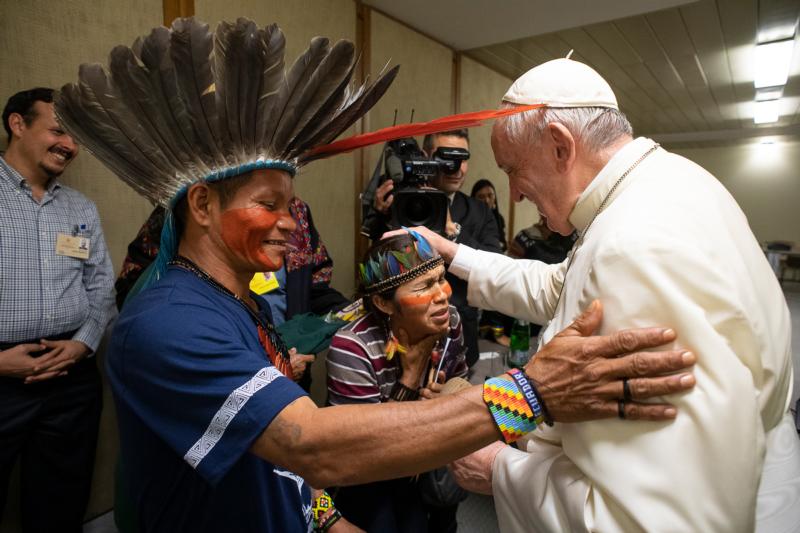 Pope Francis meets indigenous people from the Amazonian region during the second week of the Synod of Bishops for the Amazon at the Vatican Oct. 17, 2019. In an excerpt of a new book-length interview published Nov. 4, Pope Francis said the Catholic Church must follow Jesus’ command to preach the Gospel to every person, otherwise it will not fulfill its mission of bearing witness to Christ. (CNS photo/Vatican Media)

VATICAN CITY (CNS) — The Catholic Church must follow Jesus’ command to preach the Gospel to every person, otherwise it will not fulfill its mission of bearing witness to Christ, Pope Francis said.

In an excerpt of a new book-length interview published Nov. 4 by Fides, news agency of the Congregation for the Evangelization of Peoples, the pope said the phrase he uses — “a church on the move” — is not meant to be a “fashionable expression” but a summary of the church’s mission.

The book, titled “Without Him, We Can Do Nothing: a Conversation About Being Missionaries in Today’s World,” will be released in Italian bookstores Nov. 5. It was written by Gianni Valente, a journalist for Fides.

Reflecting on evangelization, the pope said that to evangelize means to deliver Christ’s teachings “in simple and precise words like the apostles did” without the need to “invent persuasive discourses.”

“The proclamation of the Gospel can even be whispered, but it always passes through the overwhelming power of the scandal of the cross. And it has always followed the path indicated in the letter of the apostle Peter, which consists in simply ‘providing reasons’ of one’s hope to others, a hope that remains a scandal and foolishness in the eyes of the world,” he said.

True missionaries, he said, act as “facilitators and not as controllers of the faith.”

Facilitators, he explained, make things easier without “placing obstacles to Jesus’ desire to embrace everyone, to heal everyone, to save everyone, not being selective, not imposing ‘pastoral tariffs,’ not playing the part of the guard at the door controlling who has the right to enter.”

Asked regarding missionaries of the past and debates that arose regarding “who was worthy to receive baptism,” Pope Francis said that, in the 16th century, Pope Paul III rejected those who theorized that indigenous people “were by nature ‘incapable’ of accepting the Gospel.”

However, even today, there are “circles and sectors that present themselves as enlightened and even (seize) the proclamation of the Gospel through their distorted reasoning that divides the world between ‘civilized’ and ‘barbaric,'” he said.

The pope said that this form of thinking was prevalent among those who criticized the Synod of Bishops for the Amazon.

“They consider a large part of the human family as if they were a lower-class entity, unable to achieve decent levels in spiritual and intellectual life according to their standards. On this basis, contempt can develop for people considered to be second rate,” he said.

Pope Francis said that Christianity “does not embrace only one cultural model.” Citing St. John Paul II, he said that while the church remains true to itself in proclaiming the Gospel and preserving its traditions, “Christianity will also reflect the different faces of the cultures and peoples in which it is received and takes root.”

While some cultures are closely linked to the proclamation of the Gospel and the development of Christian thought, he added, Christians must keep in the mind that the divine revelation “is not identified with a particular culture.”

“When meeting new cultures, or cultures that have not accepted the Christian proclamation, we must not try to impose a determined cultural form,” Pope Francis said. “Today, in missionary work as well, it is even more important not to carry heavy baggage.”

NEXT: All of life should be journey toward God, pope says at memorial Mass