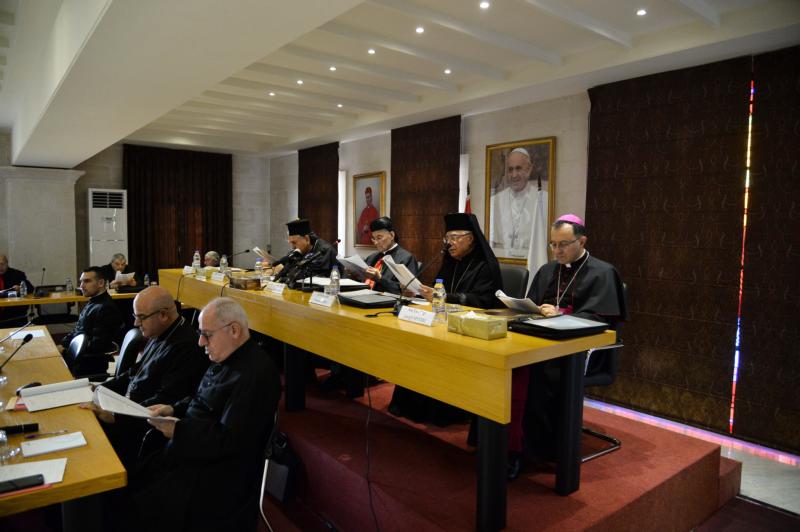 As Lebanon is engulfed in a massive protest movement, the Assembly of Catholic Patriarchs and Bishops of Lebanon gathered for its annual meeting Nov. 11-15, 2019, at Bkerke, the Maronite Catholic patriarchate north of Beirut. The meeting was led by Lebanese Cardinal Bechara Rai, patriarch of the Maronite Catholic Church, second from left, and included other heads of religious orders. (CNS photo/Mychel Akl for the Maronite patriarchate)

BEIRUT (CNS) — While Lebanon continues to be engulfed in a massive protest movement, the country’s Catholic leaders called on demonstrators to be peaceful and civilized.

In a Nov. 15 statement at the end of its annual meeting, the Assembly of Catholic Patriarchs and Bishops of Lebanon hailed the “historic uprising” that has shaken the country since Oct. 17.

Sparked by Lebanon’s economic crisis and rampant political corruption, the nationwide revolt — which includes Christians, Shiite and Sunni Muslims and Druze — aims for a sweeping overhaul of the country’s political system. About 40 percent of the Lebanese population is Christian.

Characterizing the demonstrations as a “unique event in the history of Lebanon,” the church leaders commended the unity of the people, pointing out that “Lebanese overcame sectarian and partisan affiliation for a ‘national belonging,”‘ which they stressed was the founding principle for the construction of greater Lebanon 100 years ago.

The prelates in their statement urged protesters “to exercise wisdom to keep their movement peaceful and civilized,” to avoid violence and not to “exploit politically, partisan, or ideology.” They also called on them to avoid “convulsions, violence and rhetoric.”

Although the movement involving hundreds of thousands of protesters has remained largely peaceful, one protester was killed by an army officer Nov. 12, and there have been flashpoints of friction initiated by supporters of some political leaders and parties.

Spurred by the unprecedented protests against the political ruling class, the Lebanese government stepped down Oct. 29, but it has stayed on in a caretaker capacity. So far, the process to form a new government has stalled.

The assembly urged Lebanese President Michel Aoun “to accelerate the adoption of the necessary constitutional measures to form the government and protect Lebanon, its sovereignty, independence and unity of its people, and to promote the economy and build the rule of law through the selection of competent people to serve him, in response to the aspirations of all Lebanese, especially youth.”

Meanwhile, the country’s dire economic situation continues on a downward spiral. Banks have been closed and there are limits on ATM withdrawals. Prior to the uprising, more than one-third of Lebanese citizens were below the poverty line, the unemployment rate was nearly 40 percent and public debt more than 150 percent of Lebanon’s gross domestic product.

Pointing to the root of the uprising, the patriarchs and bishops stressed that “the youth and the people of Lebanon would not have risen if their pain had not reached their maximum suffering from corruption and loss of confidence in political leaders” and from the social and economic collapse and the prevalence of “quotas and clientelism in government for many years.”

The patriarchs demanded “a credible and effective government” in order to carry out the necessary reforms, to combat corruption and to recover the looted funds and control of public funds, to provide education and jobs as well as “the necessary guarantees for various sectors of society.”

Archbishop Joseph Spiteri, the Vatican nuncio to Lebanon, reiterated Pope Francis’ prayers for Lebanon and the Holy Father’s thoughts Oct. 27 to the “dear Lebanese people, in particular to young people, who in recent days have made their cry heard in the face of challenges and the social, moral, and economic problems of the country.”

Pointing to the “positive dynamism” of the “spectacular popular uprising,” the nuncio stressed to those present that “it should not be extinguished.”

The movement, he said, “is a catalyst for a renewed, more just and democratic Lebanon” with more solidarity and fraternity.

In a letter of support sent during the meeting, U.S. bishops and the Knights of Columbus prayed “that the effect of these protests will be a more just society for all the citizens.”

NEXT: Bishops organize talks in Bolivia as protests become deadly