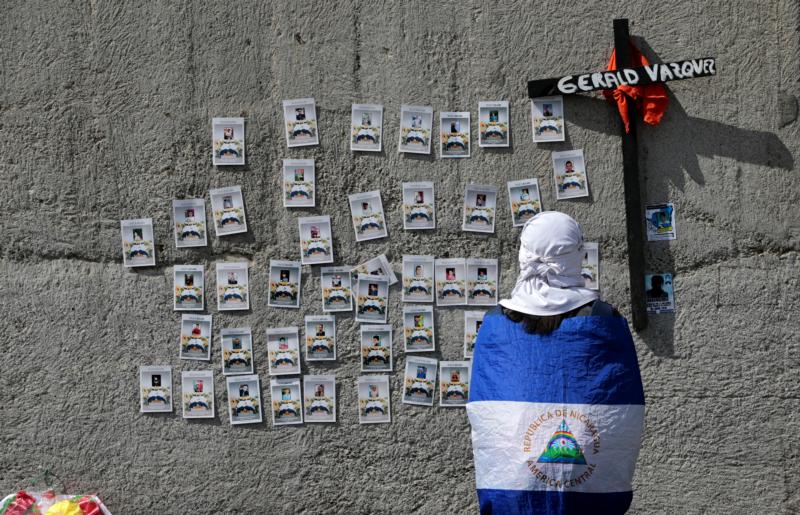 A demonstrator near the Metropolitan Cathedral in Managua, Nicaragua, looks at pictures Nov. 2, 2019, of protesters who died during the protests against President Daniel Ortega’s government last year. A priest in nearby Masaya Nov. 14 denounced intimidation by the police who surrounded his parish. (CNS photo/Oswaldo Rivas, Reuters)

MEXICO CITY (CNS) — A Nicaraguan priest has denounced intimidation by the police, who surrounded his parish in the city of Masaya, cut power and water to the building and prevented family members of political prisoners from attending a Mass in their honor.

Mass was celebrated Nov. 14, in Masaya, but only a small number of families could enter the parish. Videos shared on social media show Father Edwing Roman attempting to bring the families through police lines in front of St. Michael Parish.

“We only want to celebrate the Eucharist,” he can be heard saying as police blocked his path.

He later told the press from the doors of his parish, “Let the world see and know that there is not freedom of worship in Nicaragua.”

Father Roman then added in a message directed at President Daniel Ortega and Vice President Rosario Murillo, “(They) are showing their weakness, that they’re in an unstable position and that one of these day Nicaragua will toss them into the trash bin of history.”

Protesters rose up against Ortega in April 2018, but were violently repressed as he clung to power and accused them of “coup mongering” and “terrorism.”

Human rights groups and international organizations put the death toll from the protests at nearly 300. Amnesty International accused the police and paramilitaries loyal to Ortega of employing a policy against protesters of “shoot to kill.”

Nicaragua’s bishops have called for peace and promoted a national dialogue, which broke down because of “a lack of consensus among the parties.” Priests also opened parishes to provide shelter and assistance to wounded protesters and have accompanied families of the victims.

The bishops themselves have come under attack and attempts at intimidation; Auxiliary Bishop Silvio Jose Baez of Managua, an outspoken critic of the Ortega regime, was called to Rome for his own safety in April.

Bishop Baez tweeted Nov. 15 that he had spoken to Father Roman and the situation had calmed down, but not after the police cut power and water to the parish. The victims’ families who had remained inside the church after the Mass were carrying out a hunger strike, he said.

At least 13 individuals trying to bring supplies to the hunger strikers were rebuffed by police and later arrested, according to media reports.

Father Roman has come to prominence as priest attending to the victims of government repression, but also being intimidated for his work.

PREVIOUS: Catechism will be updated to include ecological sins, pope says

NEXT: Having a friend who is poor will help you get to heaven, pope says