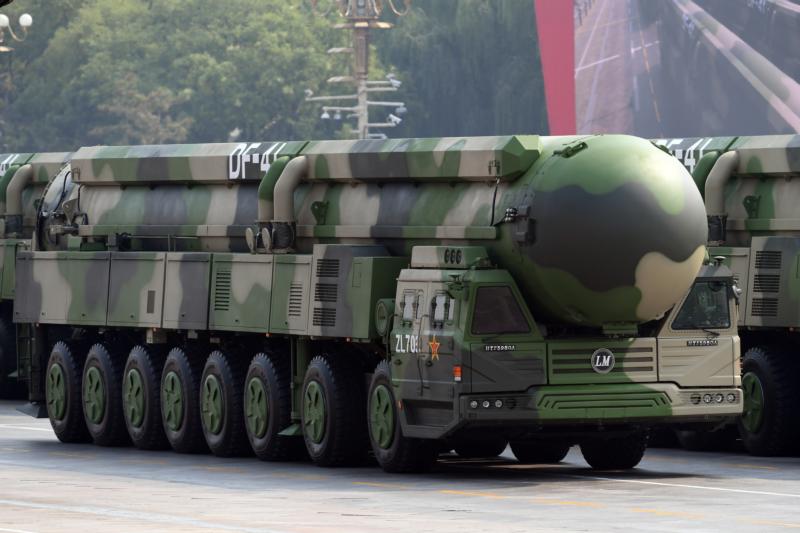 A Dongfeng-41 intercontinental strategic nuclear missiles group formation is seen Oct. 1, 2019, in Beijing. Pope Francis’ top aide made no secret of what will be on the pope’s mind when he visits Hiroshima and Nagasaki, Japan, Nov. 24: “the total elimination of nuclear weapons.” (CNS photo/Weng Qiyu, Reuters)

VATICAN CITY (CNS) — Pope Francis’ top aide made no secret of what will be on the pope’s mind when he visits Hiroshima and Nagasaki, Japan, Nov. 24: “the total elimination of nuclear weapons.”

In a late September visit to the United Nations, the aide, Cardinal Pietro Parolin, Vatican secretary of state, spoke repeatedly and passionately about the need to stop manufacturing, testing and stockpiling nuclear weapons.

During his Nov. 20-26 visit to Thailand and Japan, Pope Francis will deliver a message at the “hypocenter” or ground zero park in Nagasaki and will hold a meeting for peace later that day at the peace memorial in Hiroshima.

The U.S. military dropped an atomic bomb on Hiroshima Aug. 6, 1945, and on Nagasaki Aug. 9, 1945. Tens of thousands of people died immediately from the blasts and tens of thousands more died over the next several months from burns and radiation sickness. Japan surrendered to the Allies six days after the bombing of Nagasaki.

Pope Pius XII, who already had expressed concern to the Pontifical Academy of Sciences about plans to develop an atomic weapon, told the academy in 1948 that the “the ‘atom bomb’ or ‘nuclear energy bomb,’ (was) the most terrible weapon which the human mind has conceived to date.”

For decades, Pope Pius’ successors judged the policy of nuclear deterrence to be morally acceptable, but only on the condition that real efforts continued for a complete ban of the weapons.

The position began to change when St. John Paul II visited Hiroshima and Nagasaki in 1981 and noted that despite talk about disarmament, “nuclear stockpiles have grown in quantity and in destructive power. Nuclear weaponry continues to be built, tested and deployed,” making the destruction of humanity “a real possibility.”

People took hope from the signing in 1991 of the U.S.-Russian Strategic Arms Reduction Treaty (START) and from its successor agreement, New START, signed in 2010; but New START expires in 2021 and the Russian government announced in early November that the Trump administration had postponed indefinitely talks to renew the treaty.

Speaking at the United Nations in September, Cardinal Parolin called on the United States and Russia to “take timely action to extend the New START Treaty beyond its scheduled expiration,” and he also asked them to “come back to the table to revive talks” on the Intermediate-Range Nuclear Forces Treaty, which expired in February.

Cardinal Parolin urged the international community to keep pressing the superpowers: “We must make every effort to avoid dismantling the international architecture of arms control, especially in the field of weapons of mass destruction.”

When the pope visits Japan, he said, “he will not fail to make the strongest appeal possible for concerted steps toward the total elimination of nuclear weapons.”

Sister Filo Hirota, a Mercedarian Missionary of Berriz and longtime peace activist, told Catholic News Service that she and other members of the Catholic Council for Justice and Peace of Japan hope for even more.

“We hope that he would say that the prohibition of the production of nuclear weapons is a moral imperative,” she said.

Pope Francis is not expected to call out U.S. President Donald Trump for his administration’s delay in extending New START or specifically mention the United States and Russia allowing the treaty on intermediate-range weapons to expire. But, Sister Hirota said, “even if he does not make himself so specific, we hope he could refer to the actual political means to move the states toward a world without nuclear weapons.”

“We also hope that he would address himself to nuclear power plants,” she said. “There is no peaceful use of nuclear energy.”

In fact, the pope is scheduled to visit Nov. 25 with victims of Japan’s 2011 “triple disaster” when a strong earthquake caused a severe tsunami that flooded the Fukushima nuclear power plant, causing a meltdown, hydrogen explosions and the release of radioactive contamination.

In late October, La Civilta Cattolica, a Jesuit journal reviewed by the Vatican Secretariat of State prior to publication, ran an article titled, “It’s Time for the Abolition of Nuclear Weapons.” The article was written by Jesuit Father Drew Christiansen, a professor at the Georgetown University School of Foreign Service and a senior fellow at Georgetown’s Berkley Center for Religion, Peace and World Affairs.

Reports of Russian development of the Burevestnik or Skyfall nuclear-powered and nuclear-armed missile and of a submarine drone believed to be capable of carrying nuclear weapons show “the enormous risk that a new nuclear arms race between Russia and the United States represents for the world,” Father Christiansen wrote.

If such developments continue, he said, the non-proliferation treaty signed by non-nuclear states will be “just a fig leaf that hides the reluctance” of the superpowers to move toward disarmament.

Every Catholic should know and support the Catholic Church’s clear call for the abolition of nuclear weapons, he said, and embrace that teaching along with the defense of the sacredness of every human life from conception to natural death.