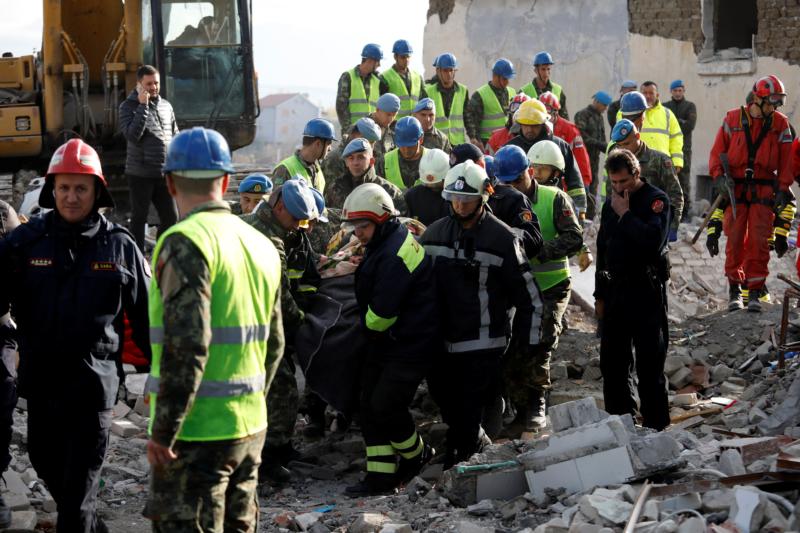 Emergency personnel carry the body of a victim from rubble in Thumane, Albania, Nov. 27, 2019, the day after a magnitude 6.4 earthquake. “I would like to send my greetings and my closeness to the dear people of Albania who have suffered so much in these days,” Pope Francis said Nov. 27 before concluding his weekly general audience at the Vatican. (CNS photo/Florion Goga, Reuters)

VATICAN CITY (CNS) — Pope Francis led prayers for the people of Albania after the country was struck by a magnitude 6.4 earthquake.

“I would like to send my greetings and my closeness to the dear people of Albania who have suffered so much in these days,” the pope said Nov. 27 before concluding his weekly general audience.

“Albania was the first country in Europe I wanted to visit. I am close to the victims. I pray for the dead, for the wounded, for the families. May the Lord bless this country that I love so much,” he said.

The earthquake struck in the early hours of the morning Nov. 26 and was felt as far away as Serbia. According to Albanian news agency, Shqiptarja, authorities said the death toll was at least 26 people and an estimated 650 wounded.

First responders worked throughout the day to recover bodies and rescue survivors from crumbled buildings. Rescue workers from neighboring Greece and Italy assisted with the efforts.

Pope Francis, the message said, “invokes blessings of strength upon the emergency personnel in their relief efforts and entrusts the people of Albania to the loving providence of the Almighty.”

In his general audience talk, the pope reflected on his Nov. 20-26 visit to Thailand and Japan which, he said, “increased my closeness and affection for these peoples.”

Recalling his Nov. 20 meeting with the supreme patriarch of Thailand’s Buddhist community, Somdej Phra Maha Muneewong, the pope said he was “continuing on the path of mutual esteem initiated by my predecessors, so that compassion and brotherhood may grow in the world.”

He also noted the Catholic Church’s presence in the Thailand, particularly in its service to the sick and the witness given by the country’s laity, priests, consecrated men and women and bishops.

Pope Francis noted the theme of his subsequent visit to Japan, “Protecting every life,” and its significance in a country “that bears the scars of the atomic bombing and is for the spokesman for the whole world of the fundamental right to life and peace.”

“To protect life, we must love it, and today the most serious threat in more developed countries is the loss of the sense of living,” the pope said.