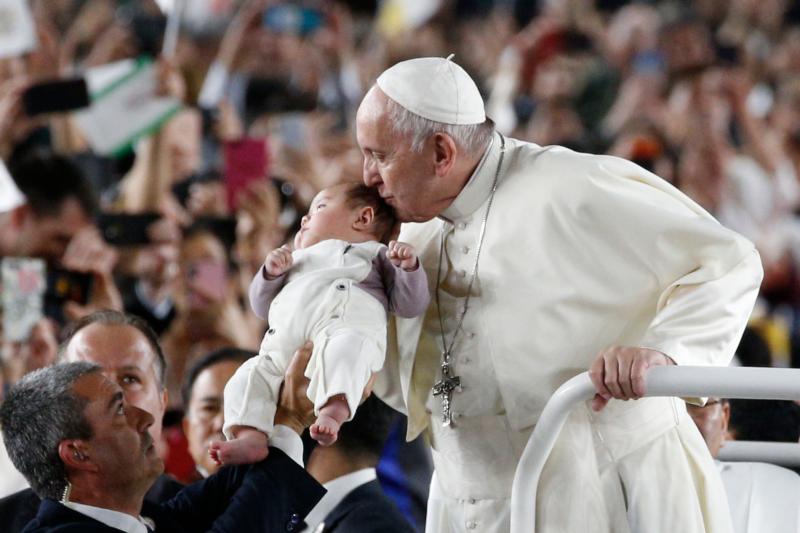 TOKYO (CNS) — Beauty, creation and each human life are gifts of God to be treasured and shared, not enslaved to current societal ideas of what is valuable, perfect or productive, Pope Francis said at a Mass in the famous Tokyo Dome.

“We are invited as a Christian community to protect all life and testify with wisdom and courage to a way of living marked by gratitude and compassion, generosity and simple listening,” the pope told an estimated 50,000 people gathered in the stadium for Mass Nov. 25.

At the Mass, with young people earlier in the day and later during a meeting with government officials and cultural leaders, Pope Francis shared his concern about the high rates of suicide in Japan and about the enormous pressure the culture places on young people to succeed.

In his homily, the pope said the freedom people should enjoy as children of God “can be repressed and weakened if we are enclosed in a vicious circle of anxiety and competition” or if people are convinced that what they produce or consume determines their worth.

When Jesus tells his followers not to be anxious, Pope Francis said, he’s not saying basic necessities like food and shelter are unimportant, but he is telling them that a single-minded focus on success and individual happiness “in reality leaves us profoundly unhappy and enslaved, and hinders the authentic development of a truly harmonious and humane society.”

Catholics need to embrace and teach others to embrace “things that are not perfect,” particularly by demonstrating that all human beings are deserving of love, he said. “Is a disabled or frail person not worthy of love? Someone who happens to be a foreigner, someone who made a mistake, someone ill or in prison: Is that person not worthy of love? We know what Jesus did: he embraced the leper, the blind man, the paralytic, the Pharisee and the sinner.”

In a long and lively dialogue with young people that morning in St. Mary’s Cathedral, Pope Francis talked about how many people in Japan and in other countries are materially rich “but live as slaves to unparalleled loneliness.”

Excessive wealth, he said, can numb young people. “Everything bores them; they no longer dream, laugh or play. They have no sense of wonder or surprise. They are like zombies,” he said.

The pope said “zombis” in Spanish; when he strayed from his prepared text, which he did often, he would nod to Jesuit Father Renzo De Luca, his former student and current provincial of the Jesuits in Japan. Father De Luca was his official translator during the trip.

Before meeting the young people, Pope Francis had a 20-minute private meeting with Japan’s Emperor Naruhito at the Imperial Palace. Afterward, a palace spokesman said the pope told the emperor that he remembers as an almost 9-year-old seeing his parents crying after they heard about the atomic bombing of Hiroshima and Nagasaki in 1945.

His parents’ crying, he said, left a big impression of him.

After the Mass, the pope met with Prime Minister Shinzo Abe, and then both of them spoke to government officials, civic leaders and members of the diplomatic corps.

Abe thanked the pope particularly for his long attention to the evils of the nuclear arms race.

“I am at a loss for words at the weight of the sorrow and pain wrought by the atomic bomb, and also at the profundity of the prayers offered by Pope Francis, who shows his compassionate consideration of this and whose heart goes out in such great sympathy for it,” the prime minister said.

Pope Francis told the prime minister and his guests that one reason he came to Japan was “to implore God and to invite all persons of good will to encourage and promote every necessary means of dissuasion so that the destruction generated by the atomic bombs in Hiroshima and Nagasaki will never take place again in human history.”

But the pope also spoke about the people of Japan, especially those who feel excluded from the country’s economic and technological advancement.

“I think particularly of the young, who so often feel overwhelmed in facing the challenges of growing up, the elderly and the lonely who suffer from isolation,” he said. “We know that, in the end, the civility of every nation or people is measured not by its economic strength, but by the attention it devotes to those in need and its capacity to be fruitful and promote life.”

PREVIOUS: Pope: Reverence for life, not profit, must determine use of nuclear power

NEXT: Pittsburgh bishop to colleagues in Rome: Give everything for the flock