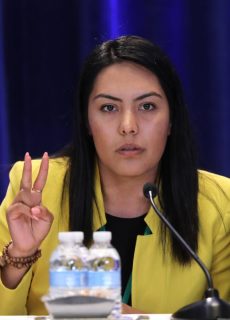 Brenda Noriega, Young Adults Ministry Coordinator at the Diocese of San Bernardino, Calif., speaks during a news conference at the fall general assembly of the U.S. Conference of Catholic Bishops in Baltimore Nov. 12, 2019. (CNS photo/Bob Roller)

VATICAN CITY (CNS) — The Dicastery for Laity, the Family and Life announced it is setting up a specialized team of young Catholic leaders as advisers.

The new international advisory body was established following a proposal in the final document of the 2018 Synod of Bishops on Young People, Faith and Vocational Discernment. The Vatican made the announcement Nov. 24, the feast of Christ the King.

The Youth Advisory Body consists of 20 young leaders who participated in the various phases of the synodal process, including the international youth forum in June, and who are active in Catholic lay movements, associations, communities or their respective dioceses.

“The group will have an important consultative and proposal-making role to play. They will assist the dicastery with issues related to youth ministry and other topics of more general interest,” the dicastery said on its website, www.laityfamilylife.va.

The new members, who will serve a three-year term, include Brenda Noriega of the United States, Natalia Garcia Jimenex of Puerto Rico, Joseph Edward San Jose of Canada and Ashleigh Green of Australia.

Noriega works as the young adult ministry coordinator for the Diocese of San Bernardino, California.

Green, 28, was the Australian delegate at preparatory meetings for the Synod of Bishops and works at CatholicCare, the social welfare agency of the Archdiocese of Sydney.

“Never in my wildest dreams did I imagine that I would be given such a platform in the church. I am committed to using it well — not for my benefit, but for the young people of Oceania and beyond,” she said in an interview with the Australian Catholic Bishops’ Conference Nov. 24.

“I will continue to make a case for a church that engages young people who are disconnected and marginalized,” she said, adding, “We now have the wisdom of Pope Francis’ apostolic exhortation ‘Christus Vivit’ to draw upon, which speaks to the dignity of all young people, but particularly young people who are hurt and suffering.”

The first meeting of the International Youth Advisory Board is scheduled for April in Rome.

The synod final document called for a “participatory and co-responsible church” that values the different charisms and gifts of its members.

“The synod asks that the active participation of the young become effective and ordinary in places of co-responsibility in the particular churches,” in national bishops’ episcopal conferences and the universal church, the document said.

The synod “also asks that the activity of the office for the young in the Dicastery for Laity, the Family and Life be strengthened, not least through the constitution of” a structure to represent the young at an international level.

PREVIOUS: Bishop accused of abuse headed back to Argentina for court appearance

NEXT: Pope ends Japan trip with visit to Jesuit university