Be consoled tenderly by the Lord in confession, pope says 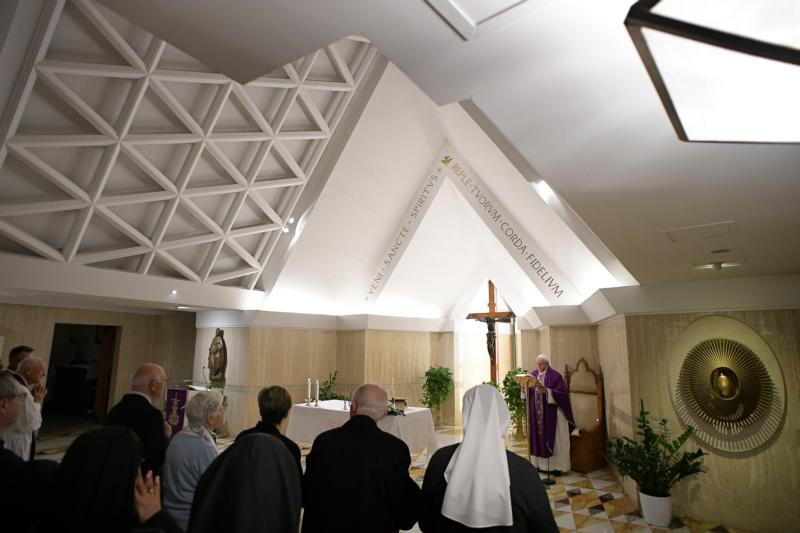 Pope Francis celebrates morning Mass in the chapel of his residence, the Domus Sanctae Marthae, at the Vatican Dec. 10, 2019. The pope said God will console anyone who lets himself or herself be consoled; all that is needed is to ask forgiveness. (CNS photo/Vatican Media)

VATICAN CITY (CNS) — Anyone who wants to experience the consolation and tenderness of God simply needs to go to confession, Pope Francis said at his morning Mass.

Celebrating the liturgy Dec. 10 in the chapel of his residence, Pope Francis recited an imaginary conversation:

“Father, I have so many sins, I’ve made so many mistakes in my life.”

“Let yourself be consoled.”

“But who will console me?”

The Lord draws near to those in need with the tenderness of a father, the pope said.

Paraphrasing the day’s reading from Isaiah 40, the pope said, “He is like a shepherd who pastures his sheep and gathers them in his arms, carrying the lambs on his bosom and sweetly leading them back to their mother ewes. That’s how the Lord consoles us.”

“The Lord always consoles us as long as we let ourselves be consoled,” he said.

Of course, he said, God the father also corrects his children, but he does that, too, with tenderness.

Often, he said, people look at their own limits and sins and start thinking that there is no way God can forgive them. “It is then that the voice of the Lord is heard, saying, ‘I will console you. I am close to you,’ and he tenderly reaches us.”

“The powerful God who created the heavens and earth, the hero-God — if you want to say it that way — became our brother, who carried the cross and died for us, and is capable of caressing us and saying, ‘Don’t cry.'”

PREVIOUS: Do what you can, when you can, to witness to the truth

NEXT: Confessions from a face-to-face confessional