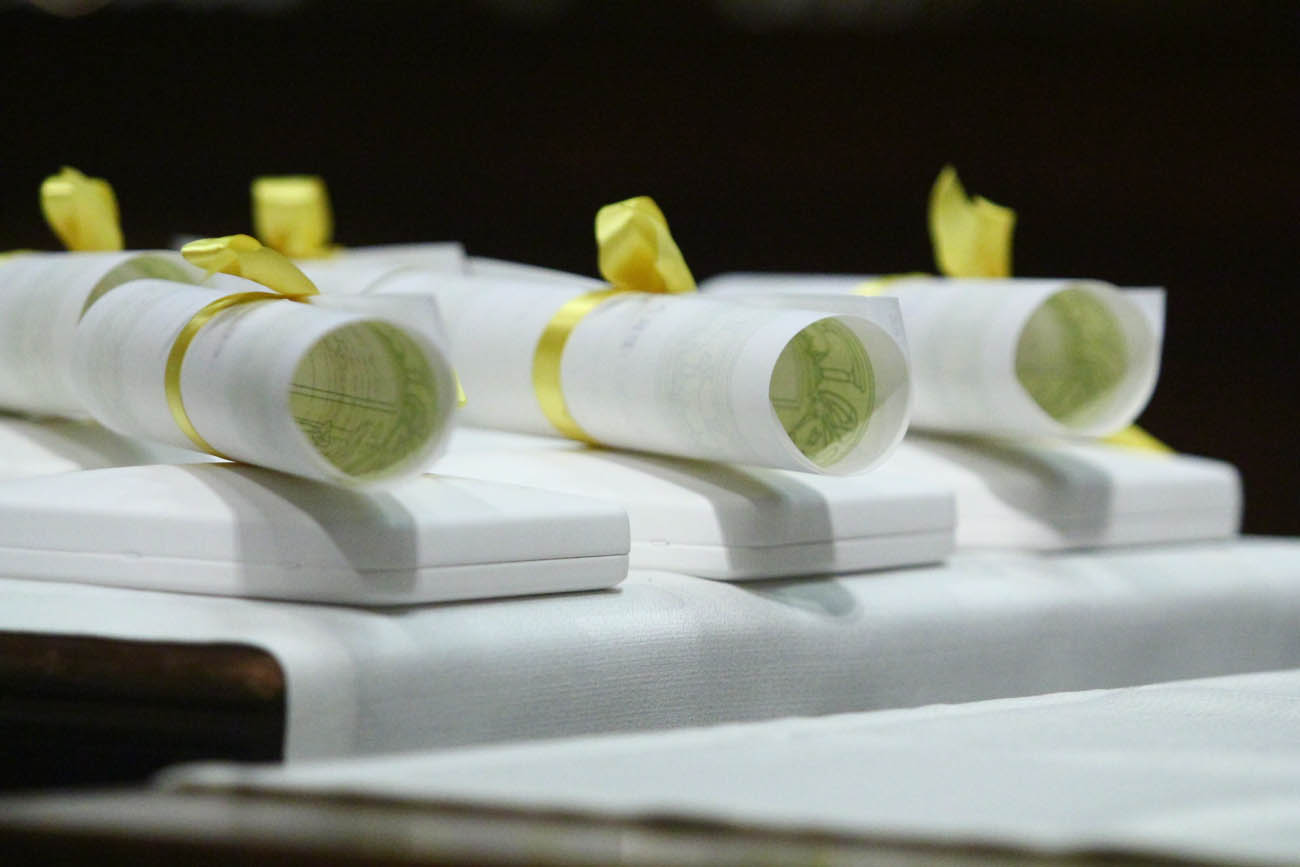 Pope Francis has recognized 10 Catholics, most with local ties to the Philadelphia Archdiocese, with honors for their exceptional service to the church. The archdiocese made the announcement and provided background information on the individuals Nov. 25.

The awardees will receive their honors from Archbishop Charles Chaput at an evening vespers service Dec. 9 in the Chapel of the Cathedral Basilica of SS. Peter and Paul.

Christopher J. Stefanick will receive the Benemerenti Medal, which was established by Pope Pius VI in the late 18th century for military service to the Holy See and later extended for worthy members of the clergy and laity. Stefanick began his career as a highly regarded youth and young adult minister working at the parish level before assuming larger responsibilities at the diocesan level. He later founded and continues to lead successful evangelization efforts on a national scale. His work forming the character and leadership skills of Catholic men has been exceptional.  He has provided outstanding counsel for many years to various bishops throughout the country, including Archbishop Chaput, and to several committees of the United States Conference of Catholic Bishops.

Receiving the Cross Pro Ecclesia et Pontifice (the Cross of Honor), established in 1888 by Pope Leo XIII for Catholics offering long and distinguished service to the church and the papal office, are the following:

Father Philip G. Bochanski, a priest of the Archdiocese of Philadelphia for more than 20 years, has spent the last decade counseling and supporting persons who experience same-sex attraction. He has worked tirelessly, with compassion and great sensitivity, to advance church teaching on human sexuality and gained national respect for the Courage apostolate. Starting as a local chaplain for Courage International, he later advanced to National Associate Director, and now serves as the National Executive Director.

For three decades, Helen McConnell has cared for the priests of the archdiocese as a registered nurse, administrator of Villa St. Joseph in Darby and director of Priest Retirement Services. In addition to her administrative duties on site at the Villa she frequently travels to care for priests living independently, in parish rectories, assisted living facilities and nursing homes. Her career in service to the church has been one of extraordinary compassion and care for those men who have given their lives to a priestly vocation for the benefit of others.

Dr. Philip J. Miraglia, a distinguished clinical counseling psychologist, began his professional association with the archdiocese in the mid-1970s. At that time, he worked as a counselor for Catholic Social Services. Over the last four decades, he has served the needs of clergy, religious men and women, and seminarians with exceptional dedication and discretion. As a psychologist consultant and collaborator, Dr. Miraglia’s counsel on some of the most difficult and sensitive issues faced by the Catholic Church has been generous, wise and honest. His career has been an invaluable gift to the church.

Louise M. Sullivan has served the archdiocese in various capacities for more than 30 years. In the early 1990s, she was part of the leadership team responsible for archdiocesan nursing homes. During that time she worked on numerous projects aimed at ensuring the highest quality of life for the aging. Since 2005, she has served as office manager for the archdiocesan Vicar for Clergy. In addition to her critical administrative service for this secretariat, she assists with ongoing formation programs, retreats, workshops and continuing education programs for the priests and deacons of the archdiocese.

Three individuals have been named Dame/Knight in the Order of St. Gregory the Great, one of the five pontifical knightly orders, which was founded by Pope Gregory XVI in 1831 to honor his sixth century predecessor. Over the course of nearly two centuries, it has been awarded to philanthropists, diplomats, military and business leaders, artists, scientists and interfaith leaders who have shown, by their service, extraordinary love for Jesus Christ and his church. With the exception of Catholic heads of state, diplomats assigned to Vatican City State, and others of international standing, the Order of St. Gregory the Great is the highest honor granted by the Holy Father to laypersons.

Receiving the honor are:

Jacqueline J. Delaney has embodied a lifelong, active commitment to the mission of the church. She has served on numerous Catholic-related boards and committees, and is the first woman named chair of the Board of Directors for Malvern Retreat House. Over the last decade she has also served as the chair of the Archbishop’s Benefit for Children, raising funds vital for youth programs administered by Catholic Social Services of the archdiocese.

James Delaney has more than 40 years of business leadership in the health care and financial industries. He has served on numerous boards and foundations including the National Advisory Council of the U.S. bishops, the National Advisory Board of the Church Leadership Institute, the National Catholic Community Foundation, the Catholic Philopatrian Literary Institute and Catholic Athletes for Christ. He is also the former Chairman of the Board at Neumann University, in addition to serving as Treasurer and Chair of the Finance and Audit Committee for the St. Charles Borromeo Seminary Board of Trustees.

Kerry F. Kober has provided superior and irreplaceable executive assistance to Archbishop Charles J. Chaput, O.F.M. Cap., for more than 25 years. She has supported his episcopal ministry in Rapid City, Denver and Philadelphia with exceptional discretion and diligence on a wide range of sensitive church matters. Her commitment to Jesus Christ and to the work of the church make her a powerful Christian witness.

Those named Dame Commander/Knight Commander in the Order of St. Gregory the Great are:

Suann T. Maier’s distinguished teaching career — in Catholic schools in New York, Los Angeles, and Denver — spanned more than four decades. As a mother and grandmother of children with disabilities, she has been a counselor, coach, grassroots organizer, volunteer and leader in prolife and special needs organizations for 45 years. In addition to her parish volunteer work over the decades, she founded 14 prolife centers and 21 prolife hot lines for women with problem pregnancies, and has served in leadership and on boards for various Catholic women’s organizations.

Francis X. Maier has a career spanning 41 years in Catholic journalism and senior diocesan service, including 23 years as senior advisor and special assistant to Archbishop Chaput in Denver and Philadelphia. Over the decades he has written, spoken and mentored extensively on church matters, served as a youth minister and catechist, and been active in Catholic men’s groups and prolife advocacy. In 2005, Fran and his wife Suann were named Knight and Dame in the Order of St. Gregory the Great by St. John Paul II.