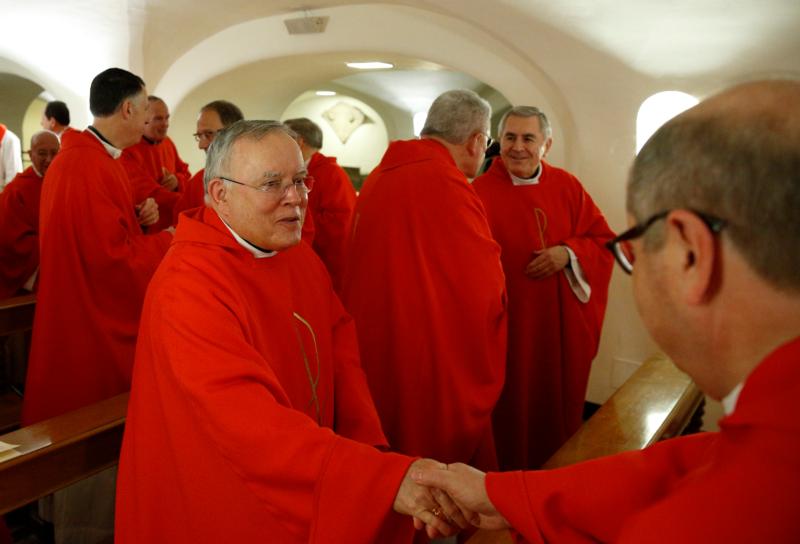 Archbishop Charles J. Chaput of Philadelphia participates in the sign of peace as U.S. bishops from New Jersey and Pennsylvania concelebrate Mass in the crypt of St. Peter’s Basilica at the Vatican Nov. 29, 2019. The bishops were making their “ad limina” visits to the Vatican to report on the status of their dioceses to the pope and Vatican officials. (CNS photo/Paul Haring)

VATICAN CITY (CNS) — “Happy Thanksgiving,” Pope Francis said in English Nov. 28 at the beginning of a two-and-a-half-hour meeting with the bishops of New Jersey and Pennsylvania.

The bishop said the pope himself mentioned the 2018 Pennsylvania grand jury report on abuse in six dioceses over the previous 70 years; “he was aware of it and he understood it,” the bishop said.

Especially considering that the pope had just returned from a week-long trip to Thailand and Japan, giving the bishops more than two hours of his time “was really extraordinary,” Cardinal Joseph W. Tobin of Newark, New Jersey, told CNS.

“Without going into detail because I want to respect the familiarity and confidentiality that the Holy Father asked for, you wouldn’t have to be a rocket scientist to figure out what we talked about,” the cardinal said.

One of the bishops told the pope “how ashamed his priests are of what went on in the States: the accusations of sexual abuse and cover up,” the cardinal said.

And the pope told the bishops he knew what that felt like because, “he said, ‘It’s happened to me.’ He talked about an experience in Buenos Aires, when he was still the archbishop, he was taking the subway to go hear confessions at a nuns’ convent,” the cardinal continued. “He said he walked past a little kid who was playing, and the parents sheltered the kid and said, ‘You have to be careful, there are child molesters around.’ He felt that, so he knows what it’s like.”

Bishop Persico said the bishops themselves brought up the impact on their priests and faithful of the case of Theodore E. McCarrick, who had served in two New Jersey dioceses before being named archbishop of Washington and a cardinal, then was dismissed from the clerical state when the Vatican determined he had abused minors.

Bishop Persico said that especially at the congregations for Bishops and for Clergy, the group emphasized that Catholics in the United States are waiting for a promised Vatican report on how it was possible for McCarrick to become an archbishop and cardinal when it seems that at least his sexual harassment of seminarians was widely known.

“I feel confident that the Holy Father understands the importance of it and the need for it to be published,” Bishop Persico said.

As for when the report will be published, Cardinal Tobin said Pope Francis “didn’t give any other indication other than that it will come.”

With the pope, the bishops also spoke about the diminishing number of Catholics in many parts of the East Coast, and the pope told them that in the Diocese of Rome there are more funerals than weddings, Bishop Persico said.

“When we were talking to him it was like speaking to an older pastor who was giving advice and showing concern for younger pastors,” Bishop Persico said.

The bishops also thanked the pope for the “gracious” way they were treated by officials of the Roman Curia. “They listened,” Bishop Persico said. “We were not treated like lower-management people.”

Like the Erie bishop, Cardinal Tobin was making his first “ad limina” visit, but he served from 2010-12 at the Vatican as secretary of the Congregation for Institutes of Consecrated Life and Societies of Apostolic Life. “I can tell you as a guy who worked here, there’s been a real change. You know before, as one cardinal put it publicly some years ago, he said, ‘We’re treated like we’re branch managers of a bad business.’ It’s not that way, now. We’re treated now as brothers.”

Bishop David A. Zubik of Pittsburgh, who spoke to CNS before meeting the pope, said that at the Curia offices, “We’ve been talking about our fidelity to the pope and our gratitude for his leadership. We have shared with them our current issues of the day, our concern for trying to attract young people back into the church, the need for doing a better job at the new evangelization” and helping people “come to a deep sense of a personal relationship with Jesus.”

“We’ve talked a little bit about the divisions that exist within the church and how we can bridge the gap with those folks,” Bishop Zubik said.

The key to overcoming that division, he said, is to put aside “ideology” and “go back to the Scriptures where Jesus says, ‘I am the way, the truth and the life.'”

“I think that sometimes we forget about those realities in our life,” he said, and that “Christ is the one who is our foundation and it is the Holy Spirit who guides us in the right direction.”

Cardinal Tobin was the principal celebrant and homilist at the Mass the group celebrated Nov. 29 at the tomb of St. Peter in St. Peter’s Basilica.

As the bishops were about to profess in front of St. Peter’s tomb, they believe in “one holy, catholic and apostolic church,” and that church, the cardinal said, “is governed by the successor of Peter and by the bishops in communion with him.”

Contributing to this story were Junno Arocho Esteves and Carol Glatz.