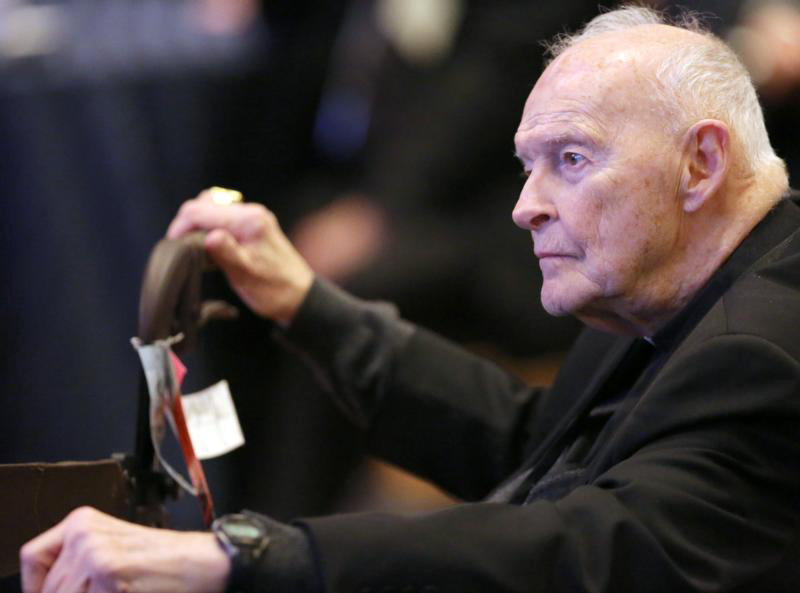 The now laicized and former Cardinal Theodore E. McCarrick, pictured in 2017, has been named in a lawsuit under New Jersey’s new victims’ rights law that lifts the statute of limitation and provides a two-year window for sexual abuse survivors to bring lawsuits in cases that were previously barred by the statute of limitations, no matter when the abuse occurred or how old the survivor is. (CNS photo/Bob Roller)

UPDATED – NEWARK, N.J. (CNS) — A day after a New Jersey victims’ rights law went into effect, a 37-year-old man represented by Minnesota attorney Jeff Anderson has filed a lawsuit against Theodore McCarrick, a former cardinal who was Newark’s archbishop from 1986 to 2000.

The suit also names the Archdiocese of Newark as a defendant and alleges Vatican officials were aware of McCarrick’s behavior over his more than 60 years as a cleric and yet continued to promote him as a church leader.

The plaintiff, John Bellocchio, alleges the now-laicized former prelate sexually assaulted him when he was 14 and then-Archbishop McCarrick was visiting Bellocchio’s parish in Hackensack.

The Associated Press quoted Bellocchio as saying at a morning news conference Dec. 2 that McCarrick “never would have been able to do the things he did and rise up the ranks the way he did without their (church officials) complicity or consent, implied or otherwise.”

In a statement sent late Dec. 2 to Catholic News Service, the Newark Archdiocese said it “will continue to cooperate and work with victims, their legal representatives and law enforcement authorities in an ongoing effort to resolve allegations made and bring closure to victims.”

“The archdiocese has already made efforts to bring about said resolution and closure, joining with the other dioceses in New Jersey to establish the Independent Victims Compensation Program (IVCP) to offer compensation to eligible survivors who were sexually abused by clergy of the church while minors,” it said.

While this compensation program “has been a viable option for some victims to achieve a level of closure,” the statement added, “it always was understood that some may seek resolution through other avenues.”

Dismissed from the clerical state by the Vatican in February, McCarrick has been accused of abusing or sexually harassing seminarians as a bishop and abusing children since early in his career of more than 60 years as a cleric.

U.S. Catholics are waiting for a promised Vatican report on how it was possible for McCarrick to become an archbishop and cardinal when it seems that at least his sexual harassment of seminarians was widely known.

On Nov. 28, during their “ad limina” visits to the Vatican, the bishops of Pennsylvania and New Jersey, including Newark Cardinal Joseph W. Tobin, brought up the impact on their priests and the faithful of the McCarrick case in a two-and-a-half-hour meeting they had with Pope Francis.

Ordained a priest of the New York Archdiocese in 1958, then-Father McCarrick was named an auxiliary bishop for New York in 1977, then became bishop of the Diocese of Metuchen, New Jersey, in 1981. Five years later he was appointed Newark’s archbishop. He became a cardinal in February 2001 and served as archbishop of Washington from 2001 to 2006, when he retired.

Since September, McCarrick has been living in a Capuchin friary in rural Kansas. He continues to deny he has abused anyone.

Anderson claims his client Bellocchio’s lawsuit is the first such suit to name McCarrick as a defendant.

Another lawsuit was filed under New Jersey’s new law by two of six sisters who claim a now-deceased priest of the Newark Archdiocese abused the six siblings for about 10 years after he transferred to Pennsylvania.