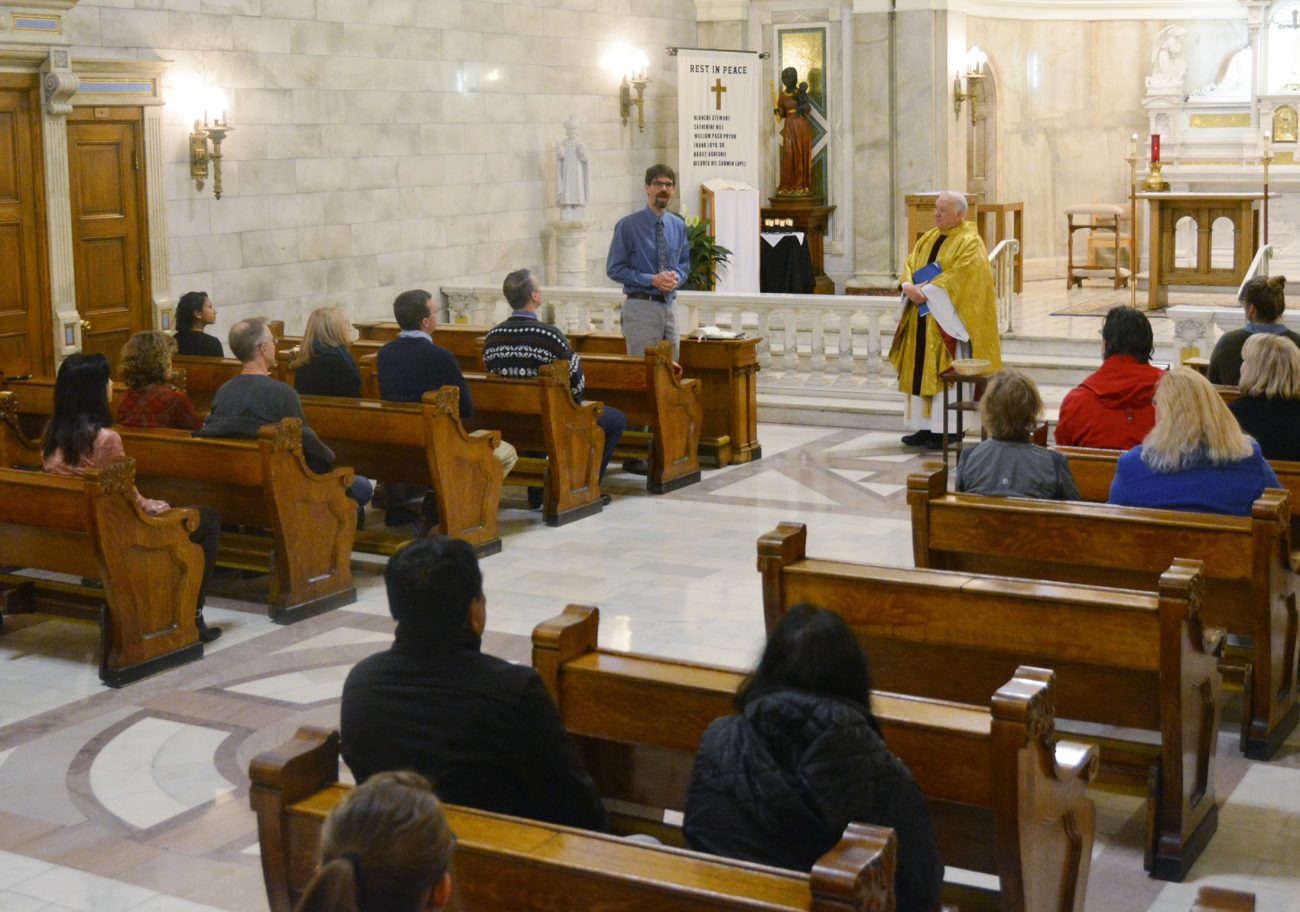 Father Lawrence Richardt witnesses Paul Giesting give thanks to those who came to the Archdiocese of Indianapolis’ first Gold Mass for Scientists at SS. Peter and Paul Cathedral in Indianapolis Nov. 15, 2019. The Society of Catholic Scientists is an international lay organization founded to foster fellowship among Catholic scientists and to witness the harmony of faith and reason. (CNS photo/Natalie Hoefer, The Criterion)

INDIANAPOLIS (CNS) — Paul Giesting has long been frustrated by a concept in Western culture that he says “is absolutely not true.”

It’s the concept that faith and science are not compatible, “that you have to pick one or the other.”

So when the member of St. Mary of the Immaculate Conception Parish in Rushville, 50 miles southeast of Indianapolis, learned about the Society of Catholic Scientists and the Gold Mass for Scientists, he was more than intrigued.

“This exists?” he recalled thinking. “I have to be a part of this.”

The more he learned about the society’s mission “to foster fellowship among Catholic scientists and to witness to the harmony of faith and reason,” the more he wanted such local camaraderie and to help in sharing the message that faith and science are complementary.

Desire turned to action. Giesting helped coordinate the Archdiocese of Indianapolis’ first-ever Gold Mass Nov. 15 in the chapel of SS. Peter and Paul Cathedral, with about 25 Catholics working in science, engineering, technology and math participating.

“We want the graces from Mass to help us do our jobs for the glory of God,” said Trina Trusty, a medical technician and a member of St. Monica Parish in Indianapolis who worshipped at the special liturgy. “It’s always good to have fellowship with like-minded people and for encouragement.”

Giesting’s interest in science’s compatibility with faith started when he was 14. He was reading Dante’s Inferno, the first part of the 14th-century Italian writer’s poem “The Divine Comedy.” It was written early in the Italian Renaissance as intellectuals of that time started exploring science as both separate from and superior to faith as a source of truth.

Giesting read the footnotes of the book as well.

“I was blown away by what I learned,” he told The Criterion, newspaper of the Indianapolis Archdiocese. “People like St. Thomas Aquinas and St. Albert the Great, they did the hard thinking of how do we iron out where there are contradictions (between faith and reason) and resolve them, and what it would look like if both could be true simultaneously — and they can be.”

Giesting went on to eventually earn a doctorate in geological sciences from the University of Notre Dame. There he met William Schmitt, a Catholic then working as an adjunct professor of journalism. The two now host a weekly podcast, “That’s So Second Millennium,” interviewing scientists about the impact of living their faith in a profession that seeks to separate faith from reason.

The society sponsors the Gold Mass for Scientists. It follows in the tradition of special Masses for members of particular professions such as the Red Mass for lawyers and lawmakers, the White Mass for health care professionals and the Blue Mass for those in public safety.

By promoting the Masses, the society hopes to create spiritual fellowship among Catholic scientists, technologists, engineers and mathematicians, as well as educators and students in those fields.

“Scientists help us try to understand the mysteries that are in nature, a nature created by God,” Father Lawrence Richardt, a retired archdiocesan priest, said during the homily. “It’s a great service that these men and women do for us.”

The gathering was “a good reminder that while most of us are very busy … there are these men and women expanding into the universe — both the cosmos and the micro-universe,” he said.

He ended his homily noting that all “are called to look at the meaning of our life both from a scientific point of view as well as a faith point of view. … We give thanks to God for the work of these men and women.”

Some of those participating in the Mass met afterward for food and fellowship.

Tom Rohn, a lay Dominican and a member of St. Monica Parish who works as a statistician for the U.S. Department of Defense, said he felt it was “a really important part of modern Catholicism to explain to the modern world why Catholicism is the most plausible explanation for why reality is the way it is.”

The Gold Mass “is a wonderful thing, especially in trying to get professional Catholics reengaged with the faith,” he said. “Without the Catholic Church, there would be no conception of the sciences as we know them today.”

Christopher Breen, a member of St. Malachy Parish in Brownsburg and a statistician for Eli Lilly and Co., noted that the Gold Mass and fellowship “could help build a scientific community within the local church.”

Such is the goal, according to the society’s website. It notes that such a community and network “may lead to collaborations on various projects, such as study groups and public lectures.”

Several of those gathered after the Mass expressed hope that the Nov. 15 gathering marked the beginning of such an effort.

Ria Pereira, a computer science teacher at Cathedral High School in Indianapolis, said she saw the possibility of such a group sharing with the larger community about the applicability of the scientific method in making moral and ethical decisions.

“We need to share that the scientific method exists, that it requires you to be patient, to gather all the data, to know all the repercussions of a decision and think about all the people who could be impacted,” she said.

Hoefer is a reporter at The Criterion, newspaper of the Archdiocese of Indianapolis. More information on the Society of Catholic Scientists is available online at www.catholicscientists.org.

NEXT: Missouri priest finds beauty in the ‘king of instruments’