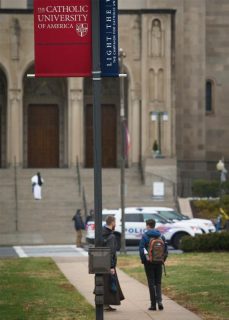 This photo taken Dec. 10, 2019, from the campus of The Catholic University of America shows Metropolitan Police Department personnel and others outside Basilica of the National Shrine of the Immaculate Conception in Washington. (CNS photo/Tyler Orsburn)

WASHINGTON (CNS) — Washington authorities apprehended a suspect in an incident involving an attack Dec. 10 against two security guards at the Basilica of the National Shrine of the Immaculate Conception, the largest Marian shrine in the United States, at the height of its busiest season.

Authorities believe the incident involves a domestic dispute but did not give details or identify those involved. Officials said the incident was not targeting the shrine.

In a Dec. 10 statement, the shrine’s director of communications, Jacquelyn Hayes, said both guards were injured in the 9:15 a.m. incident, and at a news conference later in the day, the shrine’s rector, Msgr. Walter Rossi, said the suspect allegedly used his car to hit a female security guard “with whom he was acquainted,” trying to run her over. He did not explain their relationship.

The second guard then confronted the assailant, he said. The second guard was later stabbed multiple times while inside the crypt area in the lower part of the basilica.

“A member of our family has been struck … but we are in solidarity,” said Hayes, trying to hold in her emotions during the late afternoon news conference.

Msgr. Rossi said there’s “no ongoing threat to the shrine, our staff or our visitors related to this incident.”

Shrine staff said they would not be releasing the names nor the medical condition of the victims out of respect for their privacy. Msgr. Rossi said he had visited them in the hospital, spoken to their doctors and assured them of prayers by the shrine staff.

“This incident has been quite upsetting for everyone here at the national shrine,” he said during the news conference.

Visitors were streaming in, many dropping off flowers for one its most popular chapels, the one dedicated to Our Lady of Guadalupe, whose feast day is Dec. 12. Celebrations for the feast of the Immaculate Conception also had taken place over the weekend and included a visit by U.S. Ambassador to the Vatican Callista Gingrich, who was there Dec. 9.

Msgr. Rossi said guards at the shrine are not armed, but “we’re in process of looking into the policy.”
Hayes said the stabbing appeared to have taken place in Memorial Hall, in the lower part of the building.

The incident didn’t deter Massgoers later in the day, she said, and instead, some arrived to pray, to be in solidarity, “rather than to avoid the shrine.”

“No visitors or guests were harmed in the incident,” she said.

Local news organizations said the suspect fled after stabbing the second guard. Hours later, authorities arrested the suspect, who was barricaded inside a house a few miles from the shrine in the District of Columbia.

Part of the lower part of the basilica, where the incident took place, was closed in the hours after the incident, but the regular noontime Mass continued in the Blessed Sacrament Chapel in the Great Upper Church.