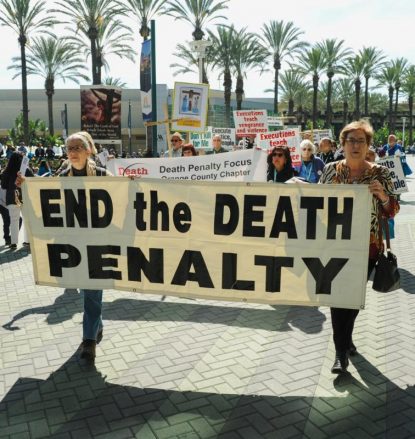 Demonstrators march to protest the death penalty during a rally organized by Catholics Against the Death Penalty-Southern California in Anaheim Feb. 25, 2017.  (CNS photo/Andrew Cullen, Reuters)

WASHINGTON (CNS) — Most Americans support life imprisonment over the death penalty, according to a Gallup poll released Nov. 24, revealing a shift in the majority opinion on this issue for the first time in 34 years.

The poll, based on results from telephone interviews conducted Oct. 14-31 with a random sample of 1,526 adults in the U.S., showed 60% prefer that convicted murders receive a sentence of life imprisonment, while 36% said capital punishment would be better.

Five years ago, the American Values Survey by the Public Religion Research Institute showed that 48% of Americans preferred life without parole as the punishment for murder and 44% preferred the death penalty.

This poll revealed religious divides on the issue and showed that Catholics, Jews, members of other non-Christian religions and the religiously unaffiliated preferred life without parole as a punishment over the death penalty. Only white evangelicals (59%) and white mainline Protestants (52%) expressed majority support for the death penalty.

In an Oct. 10 roundtable discussion about the death penalty with Catholic bishops, Archbishop Paul S. Coakley of Oklahoma City said: “It’s really important for our Catholic people to really dig into and learn, study, read the teachings of the magisterium of the church” on this issue.

He said with the popes — St. John Paul II and Popes Benedict and Francis — there has been “a steady movement toward a greater clarity in terms of the morality and the inadmissibility of the death penalty.”

NEXT: Duluth bishop dies after heart attack; he was ‘greatly loved’ by all